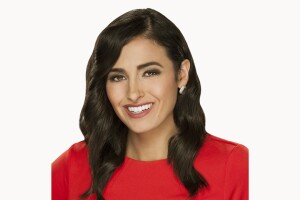 While reporting, she demands answers and action from the people, businesses and organizations that often take advantage of consumers.

Ameera comes to WXYZ from RT America, where she anchored the daily business and finance program, Boom Bust.

Before hosting a financial show, Ameera was a correspondent and anchor on the general news side of the network, carrying viewers through a number of breaking news stories, including U.S.-led airstrikes in Syria, the Boston bombing, and the civil unrest in Ferguson, Missouri.

Ameera began her career in TV journalism working in NBC News’ Washington bureau. There, she took on several different roles, working as a White House producer, assignment desk manager, and production assistant for the likes of Andrea Mitchell and Brian Williams.

Ameera is a proud native of Detroit, having grown up on the city’s east side, attending Detroit Public schools. She’s of Middle Eastern origin and grew up deeply entrenched in Metro Detroit’s vibrant Arab American community.

Ameera a proud Wolverine, a graduate of the University of Michigan- Ann Arbor, who loves all things maize and blue. She also holds a Master's degree from Columbia University’s Graduate School of Journalism in New York City.

In 2016, Ameera was awarded in the ‘Best Anchor’ category by the New York Festivals World’s Best TV & Films.

When she's not reporting, she enjoys scoping out new eateries in Metro Detroit, salsa dancing, and traveling to other side of the world.