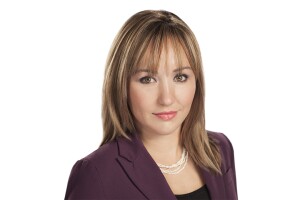 Kim Russell was born and raised in Michigan. She grew up in South Redford where her father was a police officer. Her family later moved to South Lyon where she graduated from South Lyon High School. She studied Telecommunications and Writing at Eastern Michigan University.

Kim started her professional career in journalism at WJBK in 2003. She worked there as a freelance writer, web producer, assignment editor and reporter. She left the Great Lakes state for a short time to take her first on-air job at the CBS and FOX affiliates in Lima, Ohio. After getting some experience, she hurried home to continue her journalism career working as an anchor and reporter at WILX in Lansing, as well as WSMH, WNEM and WEYI in Flint.

While at WEYI Kim was nominated for an Emmy for her coverage of the murder of 4-year-old Dominick Calhoun. The Argentine Township boy died after suffering unthinkable abuse. Kim felt honored to be able to tell his story and take part in a movement aimed at preventing child abuse.

Working in news allows Kim to meet new people and share new experiences, two things she loves. Kim is proud to work at a station like WXYZ, where the goal every day is to produce stories that make a positive difference in the community.