‘All of my skin feels like it was sandblasted.’ Woman injured after sandbag is thrown off freeway overpass 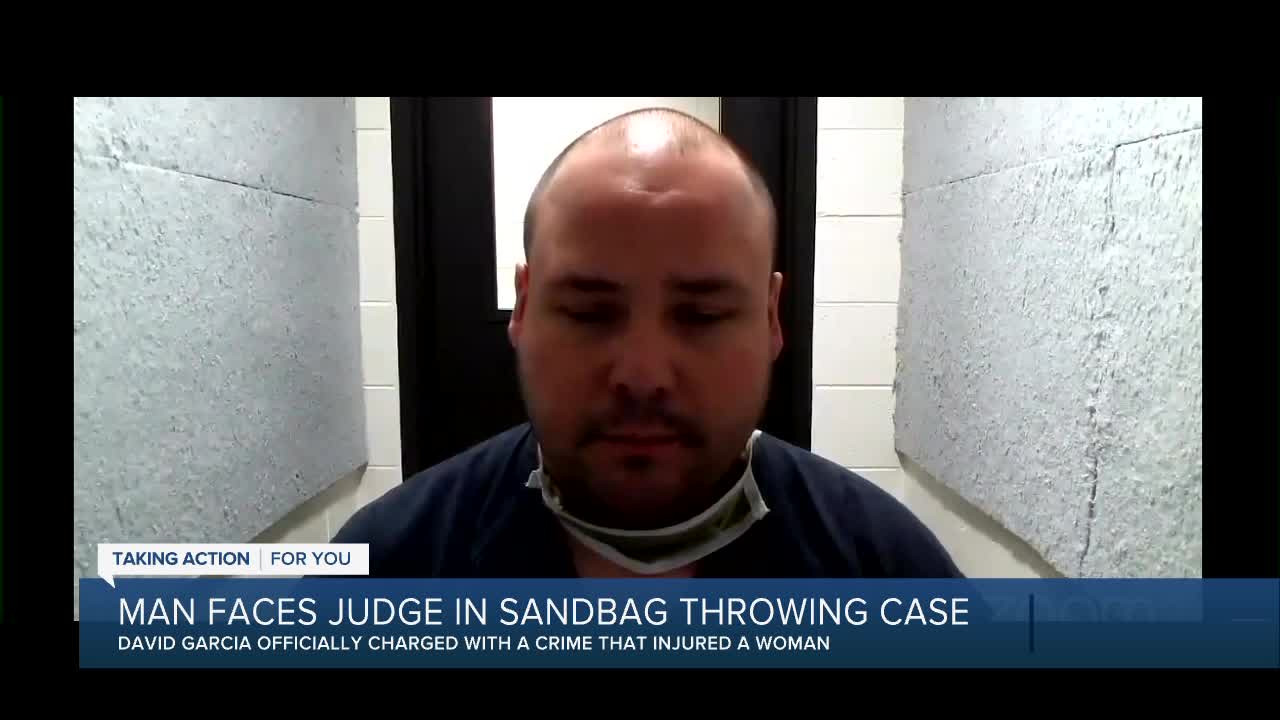 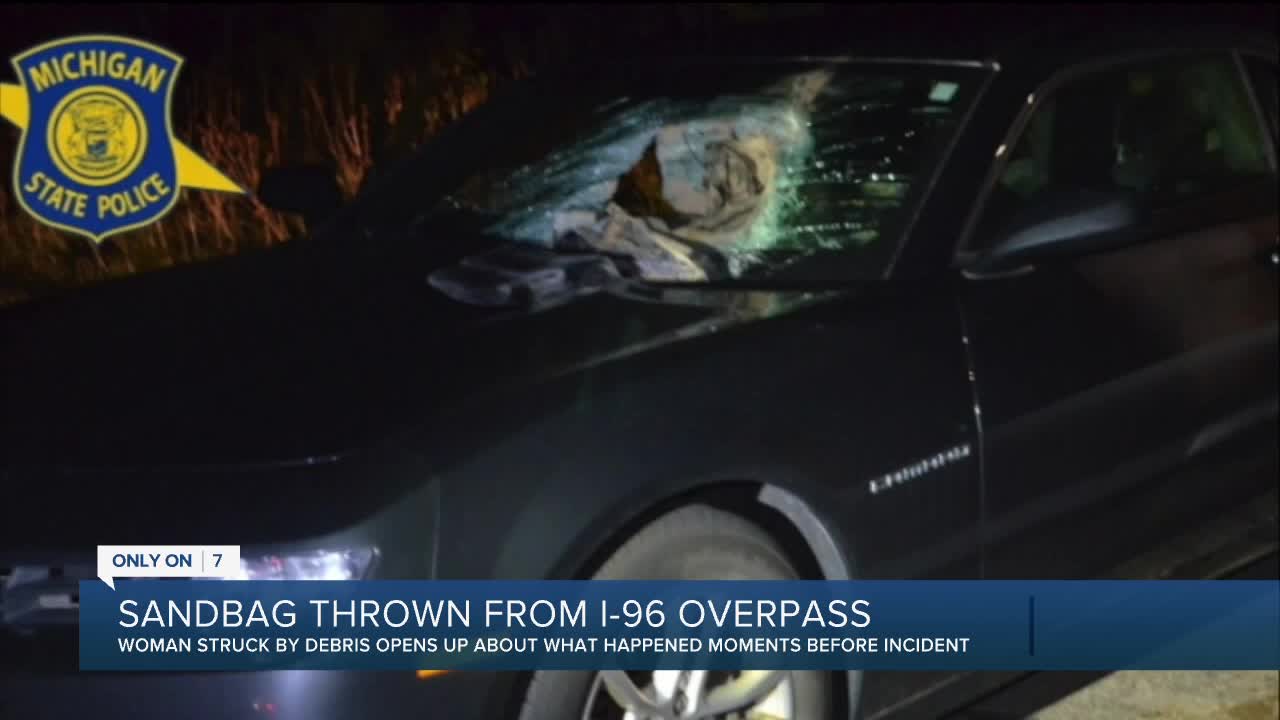 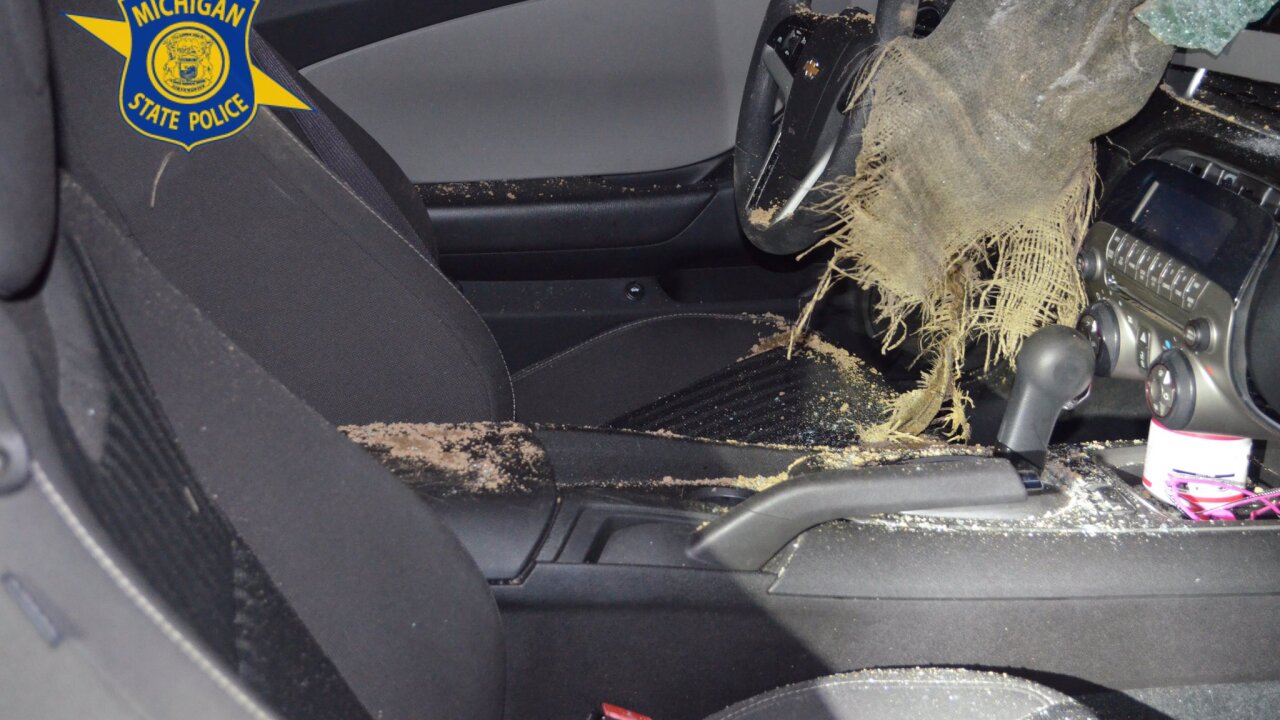 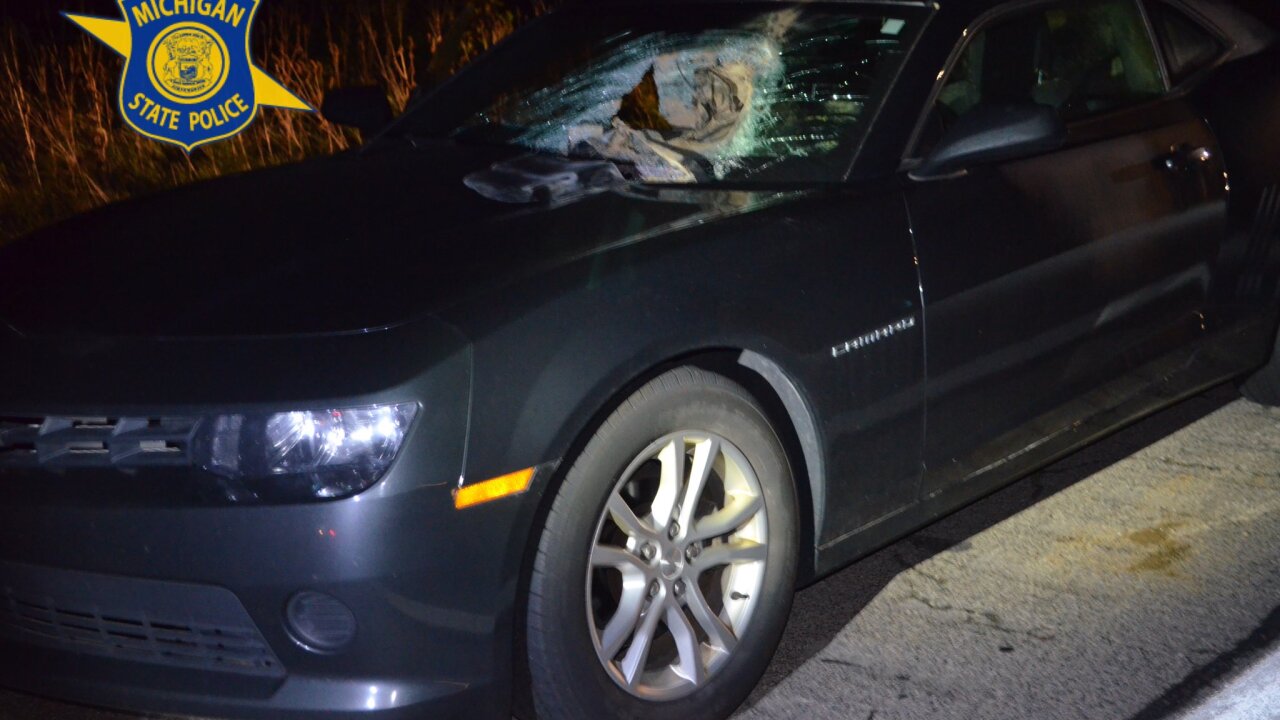 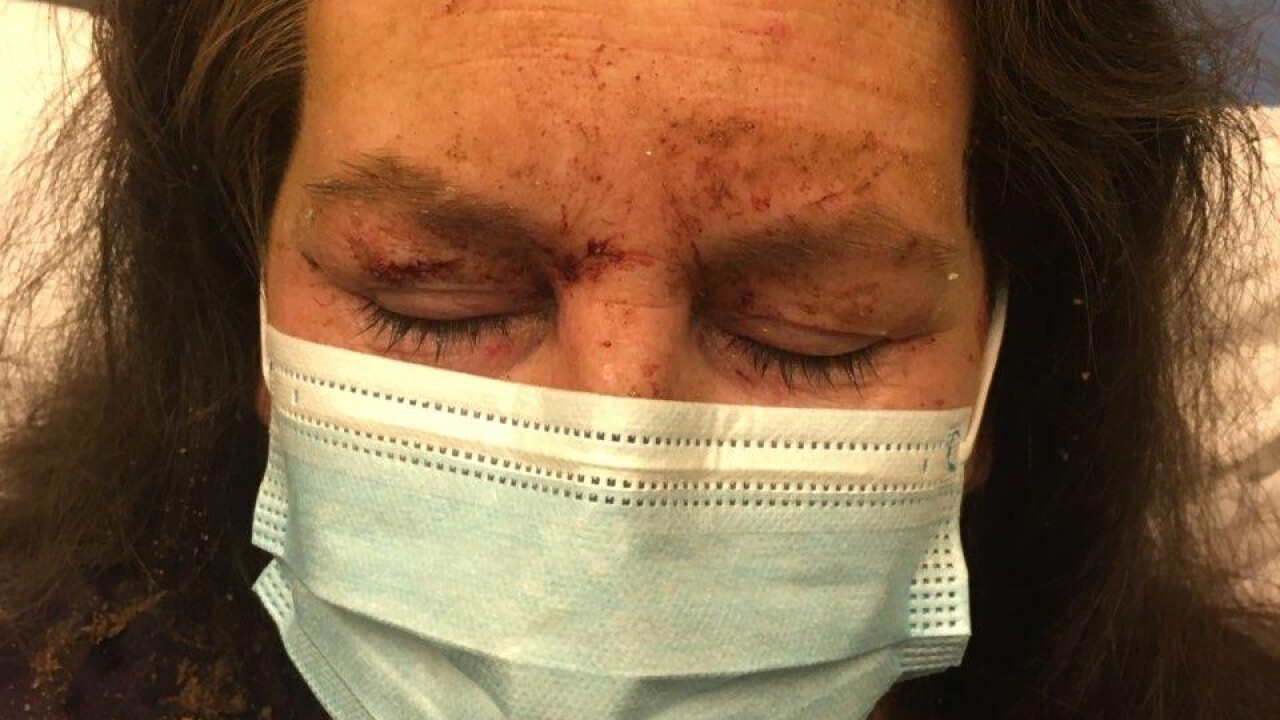 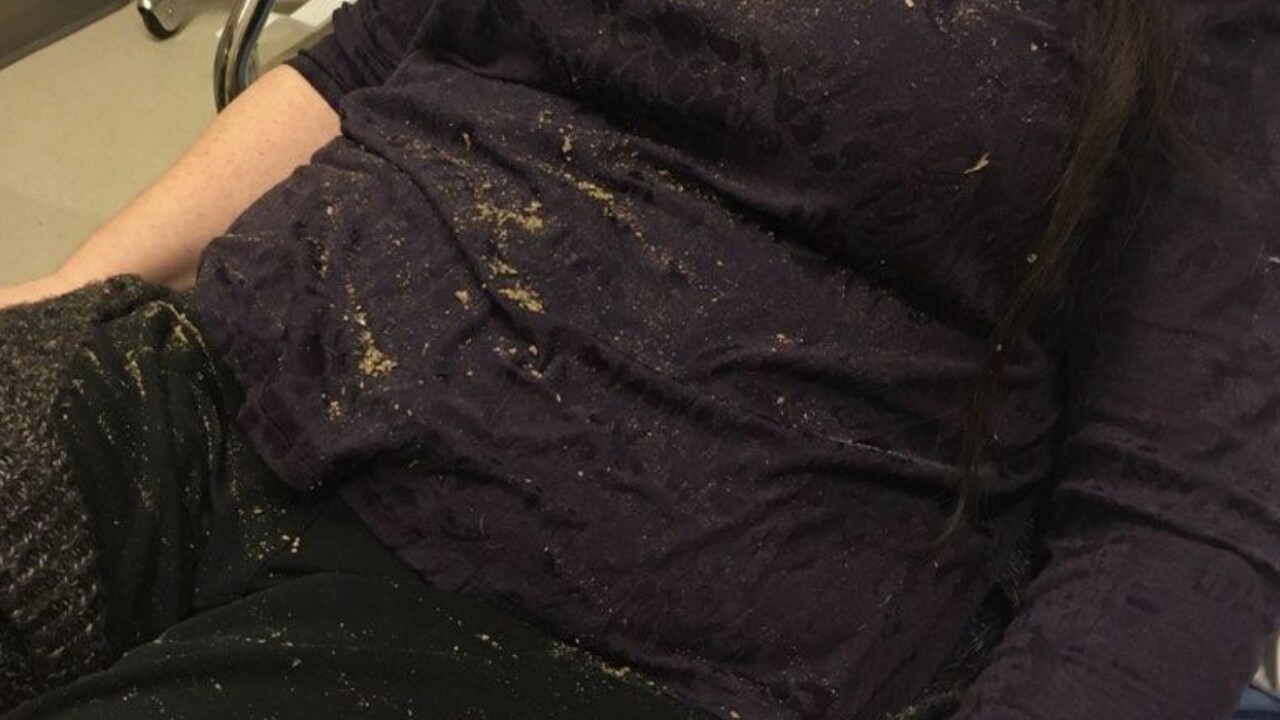 (WXYZ) — A 41-year-old Brighton man has been arrested after allegedly throwing sandbags off of an overpass in Lyon Township. The woman hit by the flying sandbag is now recovering from the traumatic event.

"All of my skin feels like it was sandblasted because it was," said Cynthia Eckley. "I was driving 73 miles per hour."

Eckley and her family say it's a miracle she's alive. And she said she saw the man who threw the 40-pound sandbag.

"I saw him and I'm driving and I'm like, is that a guy on the overpass?"

Police say the man was involved in a single-vehicle crash with his truck on westbound I-96 near Old Plank Road. He left his truck and walked up onto the overpass, which was under construction.

The suspect reportedly located several 40 pound sandbags and began throwing them from the overpass in an attempt to hit passing vehicles on the freeway, police say. One sandbag hit Eckley's vehicle, smashing through the windshield.

Police say she was taken to the hospital with serious injuries.

Eckley is just thankful she was the only one in her car.

Sunday was girls' night in the family when Eckley and her daughter get together with other women in the family to spend time together.

And Eckley had just dropped off her pregnant daughter-in-law and was returning home when the sandbag was thrown into her windshield.

"I mean, seriously, this is attempted murder," she said. "You don't do that because people die."

The suspect allegedly left the scene and was picked up by a passerby who drove him home to Brighton. After the suspect told the passerby what he did, they contacted Michigan State Police and provided the suspect's location.

The suspect's shoes matched footprints found at the scene and he was arrested.

As troopers processed the area on the overpass, they located several footprints from the same pair of shoes in the sand around the area from which the sandbags were thrown. Upon contacting the suspect, his shoes matched the footprints at the scene and were seized as evidence.

Richard Eckley is thankful his wife survived and that more vehicles weren't involved in what they can only assume was the perpetrator's attempt to take a life.

"For him to even think it's just a car, or that it was our family, and we're expecting our first grand baby," he said, adding that he hopes the man responsible will one day realize the damage he's done and could have done.

"For him to realize that an entire family would be affected by something. Geez, why would you do that?" he said.

And now with the injuries to her eyes, she and her family are asking customers for patience with their orders.

Eckley's father and her daughter, Julia, also help at the business, but Eckley, herself, works with a saw to make the custom frames and her eyes need time to heal.

The Investigation is pending review by the prosecutor's office for felonious assault causing great bodily harm and/or impairment, damage to private property and throwing objects at motor vehicle causing injury.

The suspect's driving record includes a long list of suspensions and in 2011, he was cited for Operating While Impaired by Liquor.

He remains locked up in the Oakland County Jail and is expected to be charged later this week.