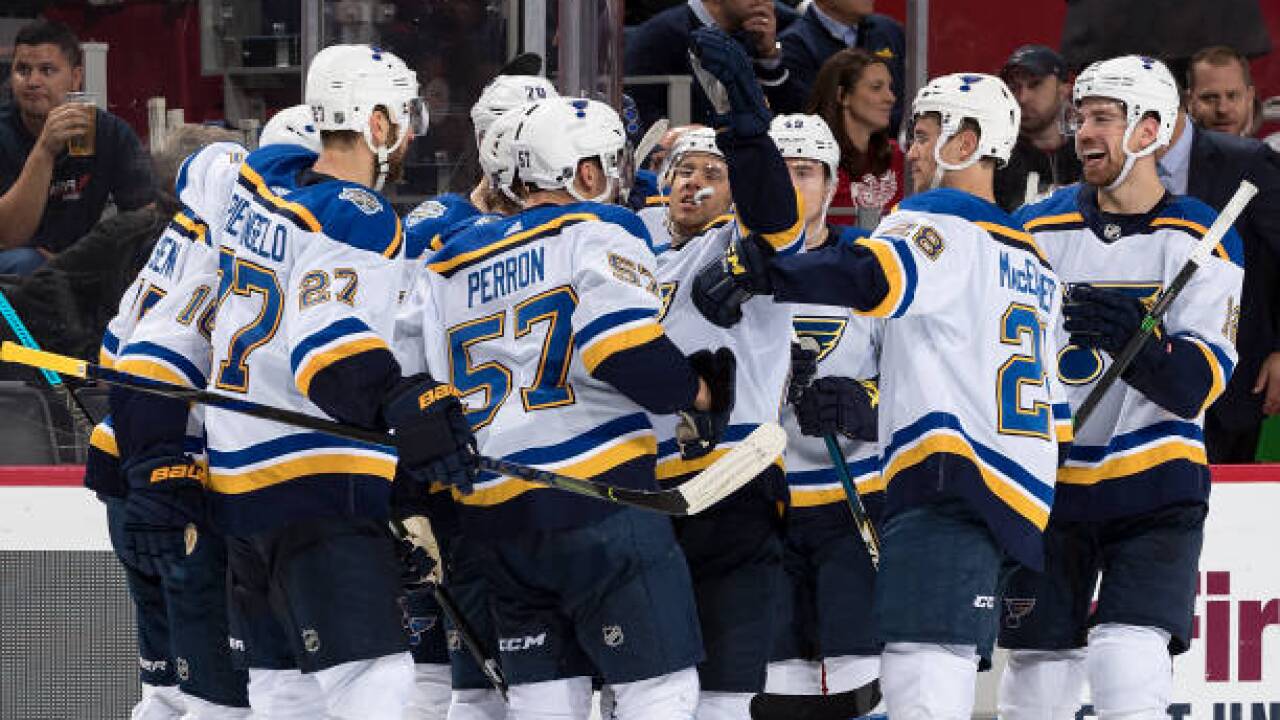 DETROIT (AP) -- The defending champion St. Louis Blues got off to a good start Sunday, struggled in the middle and finished strong.

It's not ideal, yet they'll take it.

David Perron scored at 1:28 of overtime to give St. Louis a 5-4 victory over the Detroit Red Wings on Sunday night.

The Blues blew a two-goal lead in the third-period and needed Ryan O'Reilly's late goal to send it to overtime.

"We've really been focused on getting off to good starts, but we need to be more consistent when teams make adjustments against us," O'Reilly said. "We just haven't been ready in the same way and we're getting ourselves into trouble. We have to keep the staples of our game, but adjust to what teams are doing against us."

Perron scored from the left circle, beating Jonathan Bernier, after circling with the puck for a few seconds. He has six goals this season.

"We had a good change, so we were out there with tired guys. I saw one of their guys in front of the net for a second and just aimed blocker-side high," Perron said. "I was especially happy to get that one, because I've played against Jonathan since juniors and I'd never scored on him."

O'Reilly's power-play goal tied it at 4-4 with 4:18 left in regulation. He put in a one-timer from the slot.

O'Reilly had two goals and two assists and Perron added three assists. Brayden Schenn had a goal and an assist, Zach Sanford also scored, and Jordan Binnington made 29 saves for the Blues.

Dylan Larkin and Tyler Bertuzzi each had a goal and an assist for Detroit, which lost its eighth straight. Filip Hronek and Valtteri Filppula added goals, and Bernier made 15 stops.

"Ultimately, it's my bench, I'm responsible for it. Can't have . gotta know who we're changing for. We got players on the bench, we got coaches on the bench, there's no way you can end up with a too many men," Detroit coach Jeff Blashill said. "We've taken a couple here now, that's a joke. There's no possible way that that can happen at that point. So ultimately that's my responsibility so I'll take responsibility for it."

Bertuzzi gave the Red Wings a 4-3 lead with 8:09 left in the third when his shot from the bottom of the right circle -- off the faceoff -- went in off Binnington. It was Bertuzzi's fifth goal.

Larkin brought the Red Wings to 3-2 1:44 into the third with his third goal.

Filppula tied it at 3 at the 6-minute mark, with his first goal.

Hronek put the Red Wings on the board, making it 2-1, with a power play goal 10:04 into the second period. It was Hronek's second goal and broke Detroit's 127:39 scoreless streak.