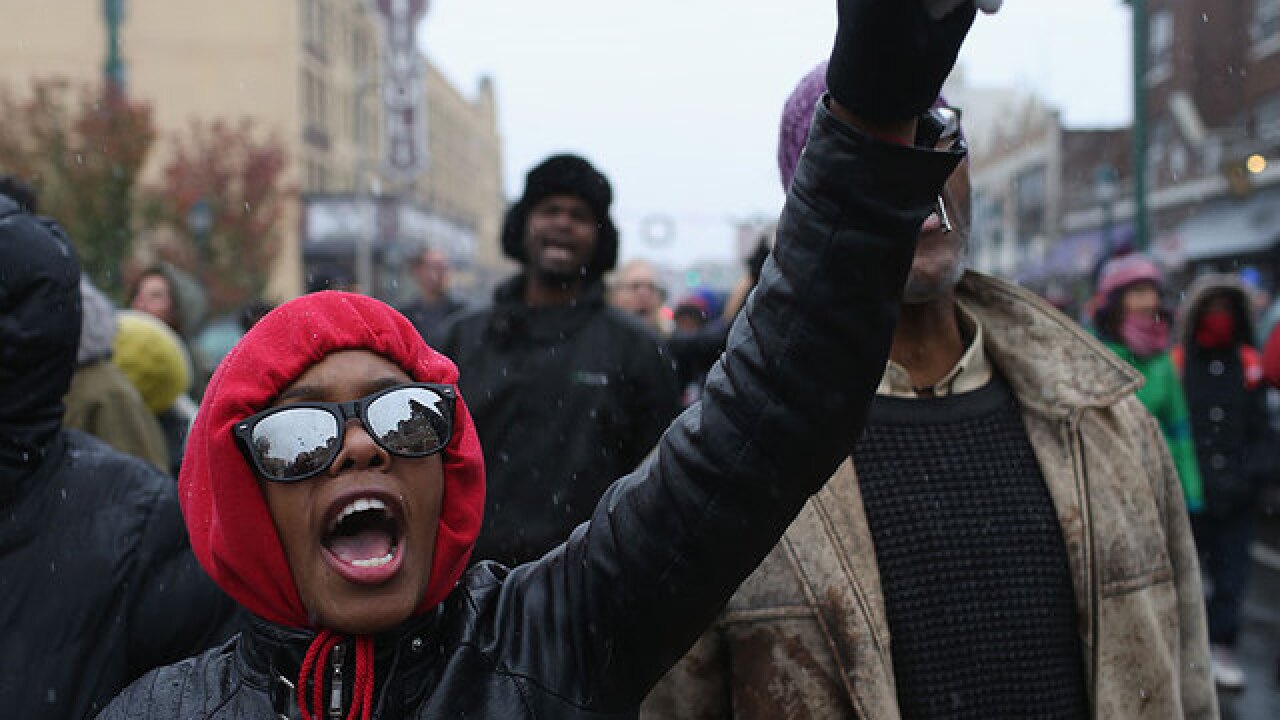 &lt;p&gt;Demonstrators march through the streets as people await a grand jury decision on November 16, 2014, in St. Louis, Missouri. The area around St Louis prepares for the grand jury decision in the shooting death of Michael Brown by Darren Wilson, a Ferguson police officer. (Photo by Joe Raedle/Getty Images)&lt;/p&gt;

The first black president in American history has been in the White House for nearly six years. With the racial bonfire known as Ferguson back in the headlines, it is an important moment to take stock and look at race relations in America – or to at least pose one narrower question: Have attitudes toward race and race relations changed in clear and demonstrable ways in the Obama years?

Contrary to what anyone would have thought on Inauguration Day 2009, there is scant evidence of improvement.  There is ample evidence that more Americans believe race relations in America have deteriorated during the Obama years than believe they have improved. In the short run of history, it is very possible that the Obama years have been a march backwards.

There is no objective measure of race relations. Even the term is murky, and  scholarship and reporting on race is fraught and supercharged.

But there are ways to get at how people perceive race and the issues around race. Polls may be the best tools, though they are far from perfect; on race, respondents often censor themselves out of a sense politeness or propriety.  Quantifying feelings – prejudices and disappointments – is a challenge.

Polling does, however, seem to reveal three patterns at this point in Obama’s  presidency. Large slices of the white population think race relations have gotten worse under Obama. Optimism about a new era of race relations has vanished. And racially charged episodes such as Trayvon Martin’s shooting in Florida and the protests in Ferguson, Missouri, demonstrate, in the words of Duke University sociologist Eduardo Bonilla-Silva, that “whites and blacks see things totally differently.”

That prominently includes perception of Obama. “[Obama’s] election was framed as the beginning of a ‘post-racial’ America. Surveys showed … that both whites and non-whites …  shared in this dream that Obama’s election was a watershed in American history,” Bonilla-Silva, the author of “Racism without Racists: Color-Blind Racism and the Persistence of Racial Inequality in America,” told me by email.

“But I remind you that about 42% of whites voted for him (that is, most did not) and that very quickly they abandoned him and began complaining about his administration. Whites’ sour view on Obama matches the views of blacks about the state of ‘race relations,’” he said.

The exit polls done for the 2014 election do not paint a portrait of progress. Only 20 percent in the survey said race relations in this country have gotten better in the past few years.  The numbers break down this way:

Blacks have a more negative view of the change in race relations than whites, but not dramatically.  Republicans, however, overwhelmingly think race relations have gotten worse. And, of course, Republicans almost unanimously disapprove of Obama. It is hard not to conclude that their negative views on Obama dominate their views on race in America in general – in a very negative way. And vice versa, perhaps.

It didn’t take long for things to curdle and for whites to say race relations were getting worse.

For example, a USA Today/Gallup poll in August 2011 found that just 31 percent of whites thought race relations got better under Obama, compared to 48 percent of blacks.

Still, 64 percent of blacks surveyed expected race relations would continue to improve “as a result of Barack Obama’s presidency.” Just 48 percent of whites shared that view.

In the summer of 2014, the shooting of Michael Brown in Ferguson, Missouri, and the protests and violence that followed jarred attitudes and showed that Obama factors into how many white people see racial issues.  Here’s how different groups of American’s perceived the episode, according to polling by the Pew Research Center:

A CBS News/The New York Times poll in August right after Ferguson found that 47 percent of all those surveyed thought race relations were generally good, 44 percent bad.  Liberals and conservatives were on different planets, with conservatives having the rosier view. The breakdown for liberals was 39 percent good, 54 percent bad; for conservatives it was 54-38.

But when you toss Barack Obama into the mix, the results look very different.

Here are the responses when asked, “Since Barack Obama has been president, have race relations in the United States …”

So conservative and rural Americans think race relations in America are pretty good from where they sit, but they’d be better without Obama because he messed things up.

Bonilla-Silva, the Duke sociologist and a critic of Obama from the left, thinks the Obama’s presence in the White House has exacerbated racial resentment among whites on the lower rungs of the income and education ladder:

Poor whites share the racial views of middle and upper middle class whites. But by virtue of their class location, they do not have the luxury of refinement... So for them, who have not seen much in the last 10-15 years, the idea of having a black man in the (still) White House is anathema. Although blacks and Latinos have not seen their lot improved during Obama’s tenure (in fact, they are worse off today than 6 years ago in many areas), poor whites believe that Obama is the anti-Christ and clear and convincing evidence that blacks are getting a ‘special deal’ from the government.

Many minorities, according to Bonilla-Silva, are “disappointed with the lack of real understanding about the state of race relations in this country.” And they are disappointed that the president too often plays the “color-blind card” and doesn’t do more for them.

Black and white Americans still see fundamental issues very differently. And there are signs that this perception gap has actually widened during the Obama years.

One example: In 1993, when asked by Gallup if the justice system is biased against black people, 33 percent of white people said yes, a number that dropped to 25 percent in 2013, when Obama had been in office for four years.  The views of blacks -- 68 percent said yes -- didn’t change at all in those 20 years.

CBS News conducted a poll in June 2014, before Ferguson, to commemorate the 50th Anniversary of the 1964 Civil Rights Act.  One question asked, “How much discrimination do you think there is against African Americans in our society today?” Among whites, 65 percent said there was “some” or “a lot” of discrimination, 32 percent said there was “only a little” or “none.” Among Blacks the numbers were 88 percent to 8 percent.

And support for programs specifically intended to help minorities has waned. In 2004, when asked by Gallup what kind of a role the government should have “in trying to improve the social and economic position of blacks and other minority groups,” 16 percent of whites said “no role at all.” By 2011, that number nearly doubled to 30 percent.

About the most optimistic take on race relations in the Obama administration is that they didn’t blow up. The hoped for – even expected – improvement didn’t happen, as polling from 2002 to 2013 by Gallup shows:

Certainly, all the talk so common in 2008-9 about a “post-racial America” seems like wobbly delusion today.

Large portions of the white population believe the racial situation in America has gotten worse – and vilify Obama.  The very fact that Barack Obama is president still seems to be a symbol of progress to most African Americans, who otherwise have far less optimistic take on race relations than they did after his election.

But polling is a ham-handed tool.  One of the most crucial questions is almost impossible to answer: How much of the intense dislike of Obama is racial?

“This is the great immeasurable when it comes to this man,” The New York Times columnist Charles Blow said. “Of course, it has some bearing on our politics, but it’s nearly impossible to calculate the degree of the effect for a particular politician.”

“There’s no doubt that there’s some folks who just really dislike me because they don’t like the idea of a black president,” No-Drama Obama said, plainly. “Now, the flip side of it is there are some black folks and maybe some white folks who really like me and give me the benefit of the doubt precisely because I’m a black president.”

In his first speech to a national audience at the Democratic National Convention in 2004, Obama famously said, “There is not a black America and a white America and Latino America and Asian America — there’s the United States of America.”

Six years into the presidency of Barack Obama, there are few signs that more Americans share that vision today than a decade ago.

[Also by Dick Meyer: Very, very rich vs. the rest of us]

Want to keep up with all the latest DecodeDC stories and podcasts? Sign up for our weekly newsletter at decodedc.com/newsletter.