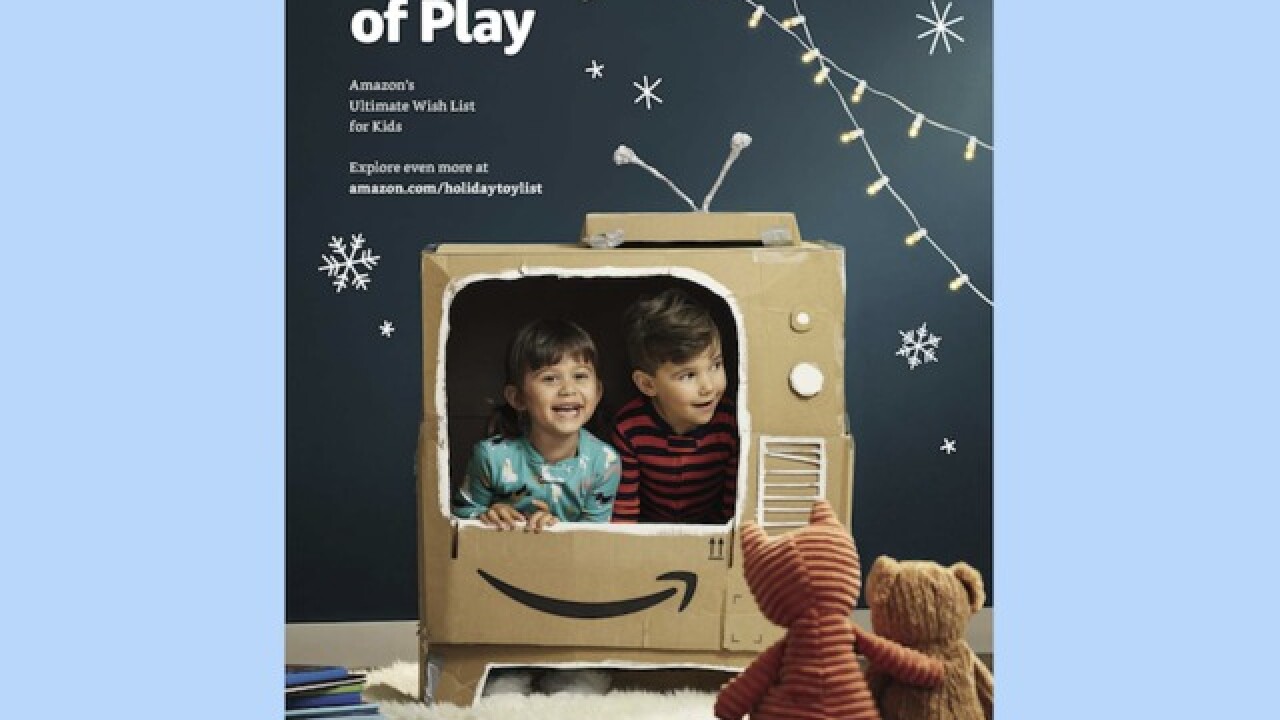 Copyright 2018 Scripps Media, Inc. All rights reserved. This material may not be published, broadcast, rewritten, or redistributed.
Amazon/Kindle
<p>Amazon's "A Holiday of Play" toy catalog.</p>

Amazon's first-ever printed toy catalog is already online and in people's mailboxes as the retail giant tries to capture the nostalgia of the holiday season with its "A Holiday of Play" shopping book.

The catalog is being shipped to millions of Amazon customers this month, CNBC reported.

But some households already have their hands on the holiday catalog and it looks like kiddos (and parents) are digging the throwback approach to holiday shopping, according to posts on Twitter.

@amazon sent out a holiday toy catalog in the mail.
We’re on 20 minutes of perusing so far.

I love that @amazon features children with Down's syndrome in their holiday catalog. Joy-filled.🥰 pic.twitter.com/HEVlaz18Vv

Theo loves snuggling by the fire and thumbing through the latest @amazon catalog.

And who said print was dead? pic.twitter.com/2qt9IoDkcN

Y'all. @amazon did a PRINT Christmas catalog with stickers. #marketing #print #ecommerce pic.twitter.com/EevdFguuuk

Kudos to Amazon for being our first toy catalog of the season. And ... it comes with stickers! pic.twitter.com/KAlURMY7Jg

Y'all. I just got an Amazon Christmas Catalog in the mail. With stickers so you can mark your favorites. Everything old is new again. #TraditionalMarketing

For those of you who miss getting the Toys R Us gift guide or any other holiday catalog for kids to browse amazon has you covered. We just got this yesterday in the mail so our grandchildren can still have a kids wish book they can pick items from. Nice. pic.twitter.com/sU2dmUjkWo

@amazon sending out a Holiday catalog is sign number 542 they are the @Sears of the 21st century. pic.twitter.com/rrb2efCQbP

The booklet features tons of toys, but oddly enough, no prices. But there are QR codes that allow readers to scan items and shop for them on Amazon. You can also scan product images with the Amazon App to get more details or add the items to your shopping cart.

There are both digital and PDF versions of the catalog for those who didn't receive the physical copy. The retailer said customers can also find the holiday catalogs at Amazon Bookstores and its 4-star locations.

Susan Gonzalez is a digital producer and reporter for the E.W. Scripps national team. Follow her on Twitter @TheNewsan.