Historic airliner trucked 300 miles to be a hotel bar 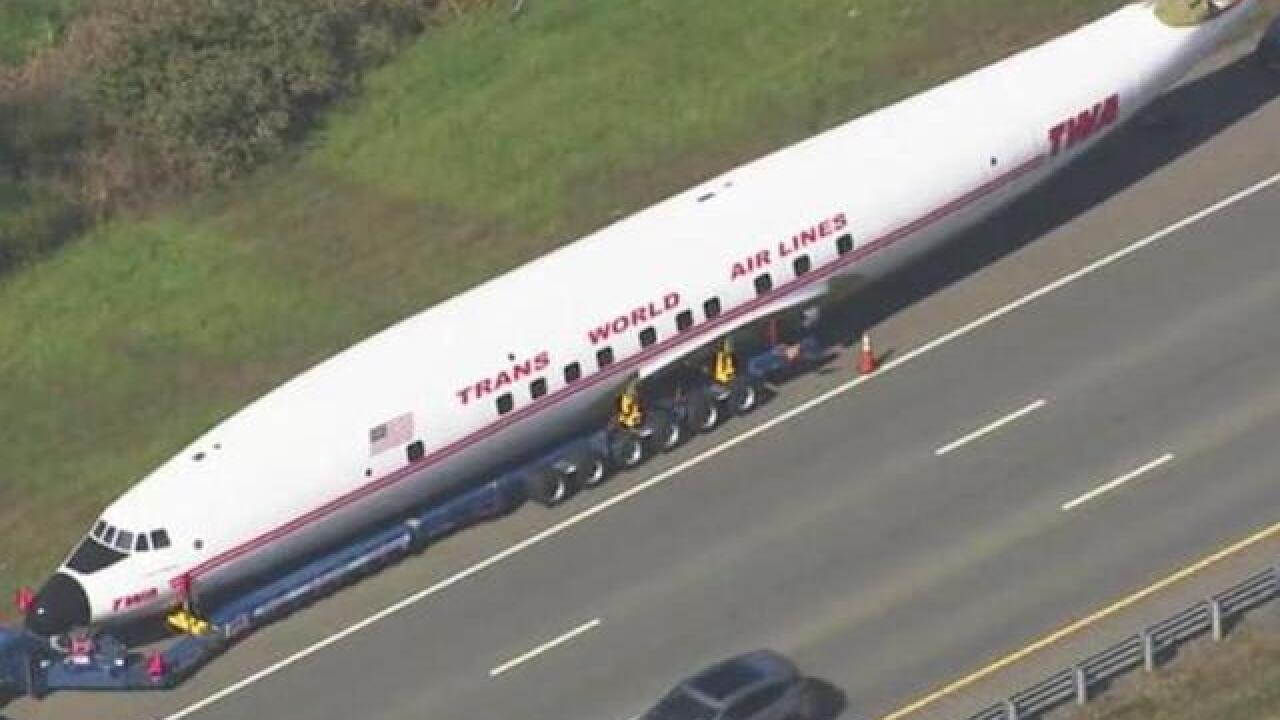 Drivers outside Boston along US interstate I-495 this week got a unique view of an iconic airplane that might very well belong in a museum.

For a short amount of time on October 10, a truck convoy carrying the fuselage of a rare Lockheed Constellation L-1649A Starliner was pulled over along the side of the highway to fix a flat tire.

Painted white and stenciled with a bright red "Trans World Air Lines" logo, the 60-year-old plane is heading to John F. Kennedy International Airport in New York, where it's expected to be converted into a one-of-a-kind bar and restaurant for the upcoming TWA Hotel.

There was a time when you were more likely to see this kind of plane flying overhead instead of in pieces on trucks along the side of the road.

In the 1950s, before the Jet Age of travel, the Lockheed's Constellation family of four-engine, propeller-driven airliners were the pinnacle of luxury for travel across the Atlantic and the US, from coast to coast.

Constellations -- aka "Connies" -- were the first airliners in widespread use that had pressurized cabins. Pressurization allowed pilots to fly high above most bad weather, making for smoother and safer travel.

Thanks to that pressurization and fast speed, Connies led the way into a new era of air travel, when flying became almost commonplace — especially for business trips.

This week, after several months of restoration, workers loaded up the 116-foot-long Constellation fuselage and tail separately onto trucks in Maine, at the Auburn-Lewiston Airport for a 300-mile-plus journey to New York City.

"That plane has been sitting at the airport for 30-something years," said Simon Graham, who grew up in the area and remembers driving by the Connie as a kid.

Graham, who owns a local custom upholstery business, was thrilled when he was asked to help restore the airplane's 744-square-foot interior.

Graham installed a new subfloor in the plane's cabin, as well as outfitted its interior walls with imitation leather. He also used Italian leather to re-upholster seats in the cabin and on the flight deck.

"This is a big deal," he says. "There are thousands of people watching this project. So far it's a crowning moment in my career."

Once the Connie arrives at JFK, it's expected to spend the winter inside a hangar, sheltering it from the weather. Plans call for the airplane-turned-bar-and-restaurant next spring.

Commissioned by TWA's eccentric and well-known owner Howard Hughes, the Constellation was designed by famed aeronautical engineer Kelly Johnson, who later went on to design the U2 and SR-71 spy jets for the US Air Force.

Constellations sported unique, smooth lines — like a dolphin — allowing them to slip easily and quickly through the air. Its triple-tail vertical stabilizer made the plane easily recognizable.

For a while, a Connie even served as Air Force One for President Dwight Eisenhower.

"The Constellation definitely has a place in a lot of people's hearts," says New York-based aviation enthusiast and industry analyst Jason Rabinowitz. "Personally I think it's a great idea to use it for the TWA Hotel. It will bring added character to an airport that has needed character for some time now. This will make a great centerpiece."

Constellations that still fly are nearly extinct these days, although a Swiss Connie named the "Star of Switzerland" was flying until last year and is scheduled to fly again soon, according to its website .

From drug plane to fancy bar and restaurant

Although TWA went belly-up in 2001, the TWA Hotel aims to build on the brand — which still remains iconic. The hotel will transform JFK airport's eye-catching TWA Flight Center, a showstopping former terminal designed in 1962 by Finnish-American architect Eero Saarinen.

The hotel will offer 512 guestrooms and 50,000 square feet of meeting space, developers say. Reservations for guestrooms are expected to be available in December.

The facility also will have a Jet Age museum and a 10,000-square-foot rooftop observation deck, which should please aviation enthusiasts.

Born in 1958, the plane — official registration number N8083H — has a storied past, including a stint in the 1960s as an Alaskan bush plane "shuttling supplies to Prudhoe Bay," according to the hotel website . In the '80s it served marijuana dealers as a drop plane in South America, the website says.

The Connie was bought in 1986 by a regional airline owner in Maine who transported it to Auburn-Lewiston Airport to get it back into flying shape again.

Instead. some of its parts were sold off to repair other Connies.

Eventually TWA Hotel developers swooped in to give it new life.