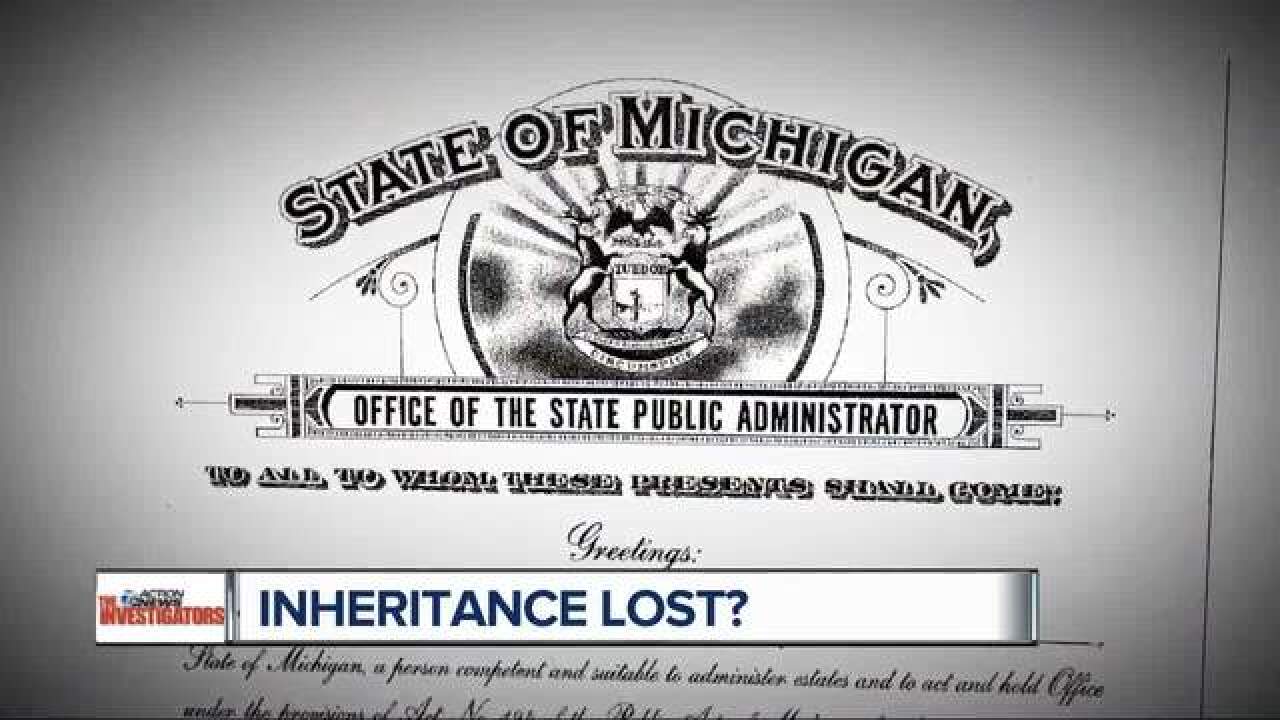 The 7 Investigators also have a major update to our first probate court investigation that focused on Macomb County Public Administrator Cecil St Pierre.

After Catallo’s first story aired, the Michigan Attorney General’s office started their own investigation into St. Pierre, and confirm that several people filed complaints against the lawyer.

St. Pierre says he “made a business decision not to do Probate Asset Recovery files prior to the suspension.  I have followed Best Practices and everything I have done has been approved by the Probate Judge and court.  I have been informed about the suspension.”

St. Pierre also told us in an e-mail that he “will investigate the issue with the Attorney General’s office and hopefully resolve any issue or complaints.”

“How can they lay their head down on their pillow at night, hurting people like that,” said Joanne Zaremba.

She’s one of several rightful heirs who say they were blindsided when someone else opened a probate estate in a deceased relatives name.  That meant Joanne could have lost her late mother’s home to a stranger. And she’s not alone.

“We were summoned to court – someone opened a probate estate in his name,” Kristin Rekowski told Catallo in November 2016.

In Macomb County Probate Court, Roberts and Cecil St. Pierre have been working together for years. St. Pierre is also the Warren City Council President.

Both Public Administrators and Roberts’ company called Probate Asset Recovery bill the estates for thousands of dollars, plus Roberts gets real estate commissions when they sell the homes.

Roberts declined to do an interview with us for this story, but he did talk to us last fall:

“I feel really good about Probate Asset Recovery. And, I’m going to help get assets for people all over this country,” said Roberts.

“I’m not taking anything from anybody. I’m helping them get things,” said Roberts.

“They are basically hoodwiking those relative into getting out of the picture,” said Oakland County Treasurer Andy Meisner.

That’s why Meisner and Oakland County Clerk Lisa Brown are teaming up to try to change Michigan’s Public Administrator law.

The current law was designed for estates where there are no heirs available. But in case after case, legal experts say Public Administrators are opening estates that do have legitimate heirs. That’s why Brown and Meisner want tougher requirements to make sure heirs are properly notified.

“What effort was put into the notice? These guys… it kind of seems like they’re opening their window and saying hey -- are you out there? We have at our disposal any number of notice requirements, including personal service, certified mail,” said Meisner.

Meisner and Brown also want civil and criminal penalties for Public Administrator attorneys who don’t do their due diligence-- causing heirs to rack up huge legal bills.

“If somebody is found guilty of this conspiracy then they should also have to pick up the tab legally for that,” said Meisner.

Legal ethics experts say Public Administrators who team up with so-called asset recovery companies and realtors have a conflict of interest.

“Their duty is the heirs, but when you look at these fees, you have to question that,” said Brown.

“When we talk about the duty of loyalty to a client, any third-party interest that could potentially conflict with your duty to your client [the heir] is something that you have to examine,” said University of Detroit Mercy Law Professor Larry Dubin. “Is this third-party interest in the best interest of the client? Are there other options that would save the client money? Simply having a contract with a third party in and of itself raises at least the spectrum of being a conflict.”

Meisner and Brown also want to require Public Administrators to be transparent with the probate court judges about all the fees that both the attorney and the realtor are adding to the estate. Right now, the settlement statements from the home sales are not disclosed to the judge, and in more than one case, we found Ralph Roberts taking a higher than normal percentage and additional fees than most listing agents.

“I think that our probate court needs to know how all of the money is being disbursed, if they are selling the property-- who’s getting what,” said Lisa Brown.

Now, the Treasurer and the Clerk are building a bi-partisan group of lawmakers to try to get some legislation introduced to stop this from happening.

“We’re on watch – watching out for our constituents and doing what we can to protect them and the public interest,” said Brown.

Until the law is changed, legal experts warn that if you don’t open an estate within 42 days of a loved ones’ death, either a creditor or a Public Administrator can open the estate, and they can take control of the assets.

To protect homeowners and heirs, the Clerk also created a Property Records Notification System. You can subscribe to get free email alerts that will tell you whenever a document is recorded with the Oakland County Register of Deeds.  Early notice may help you prevent fraud.  You can sign up HERE.