Not a single American car brand made the top 15 in a list ranking auto reliability.

Detroit manufacturers took a tumble in the annual Consumer Reports survey, based on owner reviews.

"This is the first time I can recall that we haven’t seen a domestic automaker in the top half," said Jake Fisher who presented the findings today at a press conference in Detroit.

On a list of 29 different brands, a local automaker doesn't show up until number 18. That's Ford, which is down three spots from last year.

Behind it is a laundry list of Big 3 brands. The Buick is down 11 spots at 19. Chrysler is down seven spots at 24.

Tesla, based in California, also took a big tumble, down six spots and at third from bottom.

So what’s behind the fall?

CR says U.S. automakers have been focused on implementing new technologies such as enhanced transmissions and more sophisticated multimedia systems, thereby increasing the chance for things to go wrong.

The winners on the list, Lexus at number one and Toyota at number two, are seemingly doing just the opposite.

"What they’re doing is they’re really being conservative as they add that new technology," said Fisher. With that approach, there are less kinks to work out.

Consumer Reports’ message to local automakers on how to catch up?

"Be concerned about maybe a little slower technology and making sure reliability gets there," said Fisher.

Nonetheless, Brittney Gilbert, who’s loyal to her Ford Explorer, says the ranking won’t impact her decision on what to buy.

"I haven’t had any problems with it but if it’s in the top 10 that’d be great, top 5 even better. Nothing is perfect [but] I love my truck," said Gilbert.

Check out where your car falls on the list: 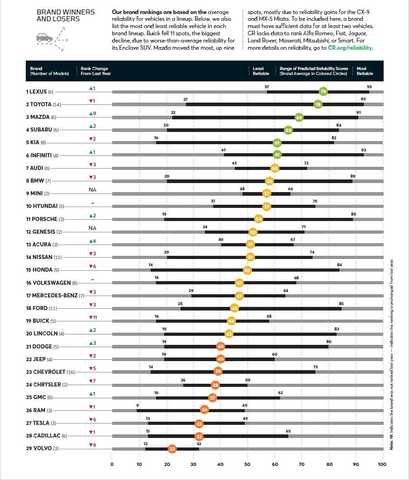