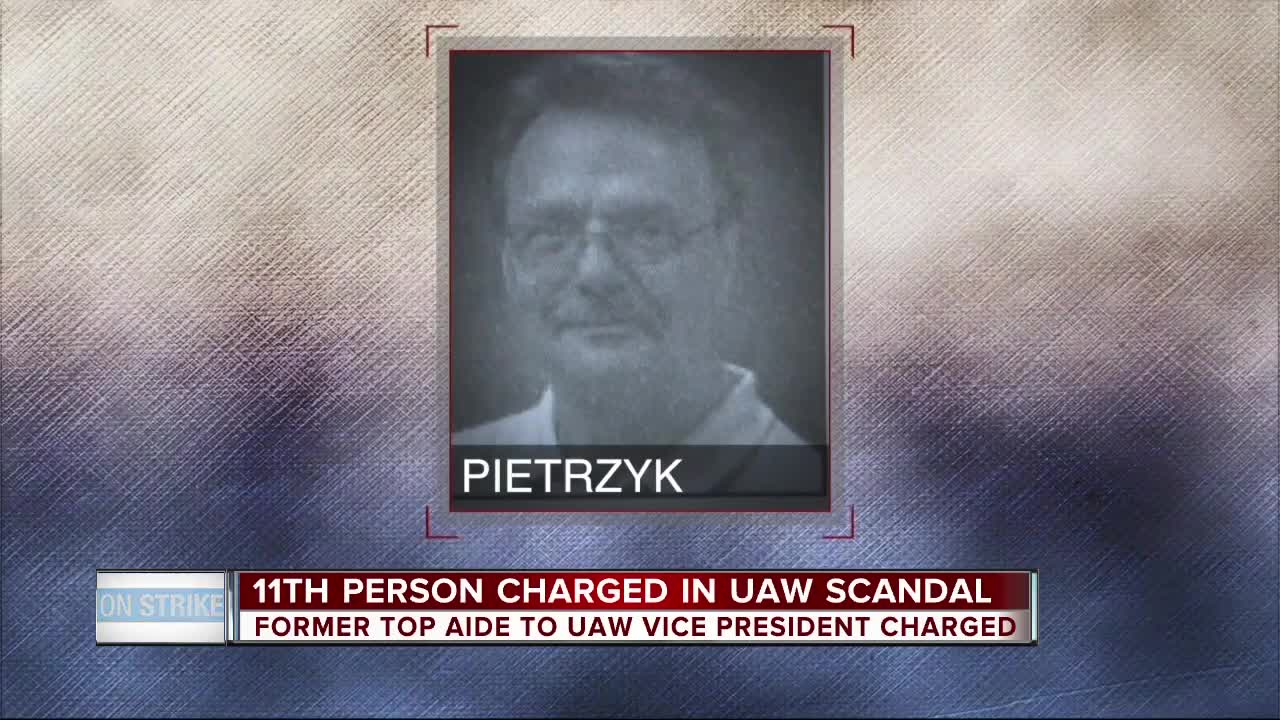 Jeff Pietrzyk was an assistant to UAW Vice President Joe Ashton and part of the 2011 staff during contract talks.

DETROIT (WXYZ) — Jeff Pietrzyk was an assistant to UAW Vice President Joe Ashton and part of the 2011 staff during contract talks.

His Polish name was pronounced paycheck among his union brothers and sisters.

The feds have now charged him with money laundering and wire fraud in the ongoing corruption case. He’s the 11th to be charged.

In court documents, the feds outline years of bribes and kickbacks with vendors to the union who made watches, backpacks and coats in multi-million dollar contracts. The feds say hundreds of thousands of dollars in kickbacks were paid.

Former UAW Official Mike Grimes has pleaded guilty to the same charges of money laundering and wire fraud. The feds say he got almost $2 million in kickbacks.

Current UAW Regional Director Vance Pearson has also been charged but he’s still on the job part of the negotiating team. He’s set to be in federal court in Detroit on Tuesday.

UAW President Gary Jones has not been charged but is implicated in the case. His home was raided by the feds last month.

He tells 7 Action News, “They should step down immediately. It’s really disappointing. At the same time, I’m glad they’re finding out all this corruption at the top is going on.”

He also says, “I’m going to give 100% support to all the UAW members especially over at GM right now.”

And he adds this is far from over, “I heard there’s a lot of employees that are going to go down to the Ren Cen and protest on behalf of the UAW members and try to make their voice heard about the corruption and that it needs to stop.”

The UAW released the following statemet about Pietrzyk

The charges against Jeff Pietrzyk are serious, and the conduct outlined in his charges is not just illegal, it is an affront to every member of the UAW. The UAW has already made changes to its purchasing procedures that require three bids and pushed the Joint Program Centers to significantly tighten their accounting controls to prevent this type of criminal activity from happening again. This conduct — which was suspiciously announced in the middle of our current bargaining — must not and will not distract us from negotiating the strongest possible contract for our members.

On Sunday, September 22, 2019, at the UAW General Motors and Aramark picket lines across the nation – I encourage your participation in Solidarity Sunday. We are inviting people of faith and others to join the picket lines in support as we recognize one full week since the start of this fight for a strong contract. Additionally, at noon on Sunday, your local union chaplain will be available on the picket lines for words of support.

As you know, strikes can be physically, emotionally, and spiritually exhausting on our membership and their families. We sincerely hope that these services provide everyone with a peaceful opportunity to come together to show support for those on the picket lines and those who have been wrongfully stripped from their quality healthcare by General Motors.