Want to beat the holiday shopping rush? Check out these pre-Black Friday deals

The 3-day event starting today also has deals on laptops, a printer, and a sound bar speaker 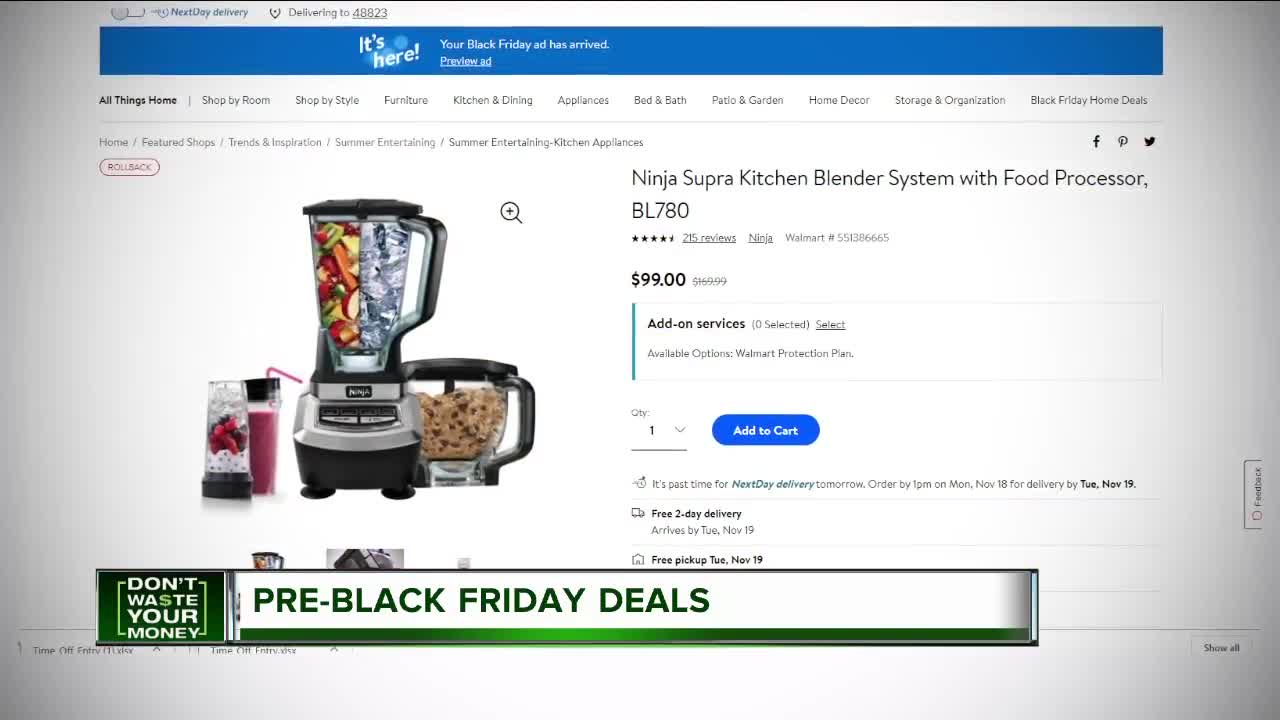 If you can’t wait for the real Black Friday sales to kick in, Walmart is hoping that deals such as a 58-inch 4K smart TV for under $300 will be enough to get you interested in its three-day sale, which kicks off today and runs through Sunday, Nov. 11.

The sale will include a wide range of products, including small appliances, toys, and household items, but we’ve focused on the electronics deals. You can see the full ad courtesy of our friends at GottaDeal. Most of the sales are available both online and in stores, but there are some web exclusives.

In addition to several TVs, ranging in size from 50 to 58 inches, you’ll see price cuts on laptop computers, a sound bar speaker system, Apple AirPods, a new Fitbit smartwatch, and a Roku streaming player. There’s even a $24 all-in-one printer.

But not all the claimed specials are any better than what we’re seeing at other retailers. We’ve gone through the entire ad and compared Walmart’s sale price with what other retailers are charging. And when we’ve tested a product in our labs, we’ll let you know how it did.

50-Inch Vizio 4K Smart TV
The deal: $248 at Walmart
This is the Vizio D50x-G9, which we saw during Walmart’s Labor Day sale for $280 and which then dropped to $268 a week or so later. This set—in Vizio’s entry-level 4K, or Ultra High Definition, line—isn’t widely available outside of Walmart.

55-Inch Vizio 4K Smart TV
The deal: $398 at Walmart
This model, the Vizio M556-G4, isn’t widely available outside of Walmart, but it’s $500 on Vizio’s site right now. It’s part of Vizio’s midline M series sets, which have typically done well in CR’s tests for HD and 4K but not as well for high dynamic range (HDR). This is an online exclusive, not available in stores.

58-Inch Hisense 4K Android TV
The deal: $298 at Walmart
CR’s test results: Hisense 58R6E
This set seems to be available mainly at Walmart; we also saw this model at the same price at Walmart in September. We tested this model, and while it did well for high-definition picture quality, it had subpar 4K performance and ineffective HDR.

Deals on Other Electronics

Dell 13-Inch Inspiron Laptop
The deal: $249 at Walmart
This lower-end model has an i3 processor, 4 gigabytes RAM, and a 128GB solid-state drive for storage. We haven’t tested this specific model, but a similar one did okay in our tests.

HP 14-Inch laptop
The deal: $399 at Walmart
This midtier model comes with an i5 processor, 8GB of RAM, and a 256GB solid-state drive. It’s an online exclusive, not available in stores. We haven’t tested this specific model, but a similar one did pretty well in our tests. It’s often hard to compare laptop prices based on configurations, but this seems like a decent deal.

Vizio 5.1-Channel Sound Bar
The deal: $148 at Walmart
This model, the Vizio SB3251N-E0, seems to be available mainly from Walmart, though it’s selling for about $230 at Vizio right now. It’s a 5.1-channel system with rear speakers and a wireless subwoofer, so it can create a true surround-sound experience. We didn’t test this particular model, but Vizio sound bar speakers have typically done well in our ratings.

Fitbit Smartwatch
The deal: $149 at Walmart
We’re in the midst of testing the Fitbit Versa 2, but Fitbits have generally done well in our ratings, This is a good price, though we expect to see this model at this price in lots of other Black Friday deals. When we checked this on the Walmart site, though, it was still listed at $199.

Apple AirPods With Charging Case
The deal: $144 at Walmart
CR’s test results: Apple AirPods (2nd Gen.) With Wireless Charging Case
Like their predecessors, the second generation Apple AirPods have a true wireless design. They also feature a number of upgrades, including the ability to activate Siri hands-free and a new chip that Apple says improves call quality compared with the previous model. We tested this model and it did well, if not great, in our ratings. However, we’re seeing these earphones at this price regularly now.

HP All-in-One Printer
The deal: $24 at Walmart
We didn’t test this model, the HP DeskJet 2640, but we did test the HP 2540, which did well in our ratings. We see this model only at Walmart, but Best Buy is selling the similar HP 2680 for even less—$20—during its pre-Black Friday sale.

Roku 4K Streaming Player
The deal: $29 at Walmart
CR’s test results: Roku Premiere
We’ve been big fans of Roku’s streaming players, which offer access to lots of streaming services and an agnostic approach to search. But you can get this 4K player, which supports HDR, at this price at many retailers.