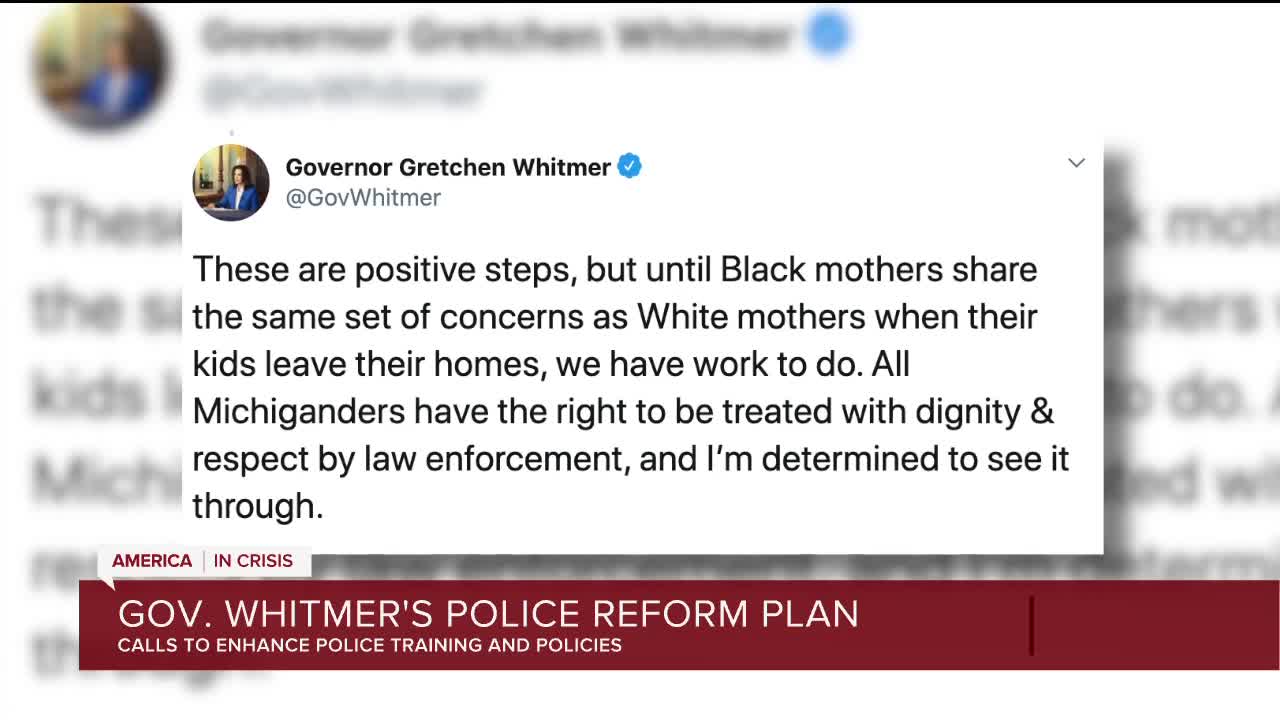 Michigan Gov. Gretchen Whitmer announced support for several policy plans for police reform in Michigan on Wednesday. Whitmer called on law enforcement agencies to enhance their training and policies to help create a culture where everyone is treated the same.

Whitmer called on law enforcement agencies to enhance their training and policies to help create a culture where everyone is treated the same.

Whitmer also voiced her support and applauded the Senate for taking up Senate Bill 945, sponsored by State Sen. Jeff Irwin.

“The deaths of George Floyd, Ahmaud Arbery, and Breonna Taylor were a result of hundreds of years of inequity and institutional racism against Black Americans,” Whitmer said in a release. “Here in Michigan, we are taking action and working together to address the inequities Black Michiganders face every day. That’s why I'm calling on Michigan police departments to strengthen their training and policies to save lives and keep people safe. I am also ready to partner with the Michigan Legislature and law enforcement officials to pass police reform bills into law.”

“We recognize the shortcomings of the systems in place today—systems that have left Black, Latino, and other communities of color feeling underserved, even threatened by law enforcement,” Lt. Gov. Garlin Gilchrist added. “People across Michigan have been calling for changes to police practices, and these actions are clear steps in the direction of needed reform. We are not done, and we strongly encourage cities and counties to adopt and enact local measures that build trust, accountability, and a comprehensive, non-discriminatory experience of safety for everyone in our state.”

Under SB 945, incoming law enforcement officers would be required by law to go through training on implicit bias, de-escalation techniques and mental health screening.

“The role and responsibility of police officers in our society is a great one; one in which our authority is derived from the trust and support of the people we serve,” Gasper said in a release. “Our members take an oath to protect and serve all people, and in this time, we cannot stand on the outside looking in. We must listen and take action, reviewing our policies and practices to work together to pave a path forward where everyone has a voice and all are treated equally as human beings.”