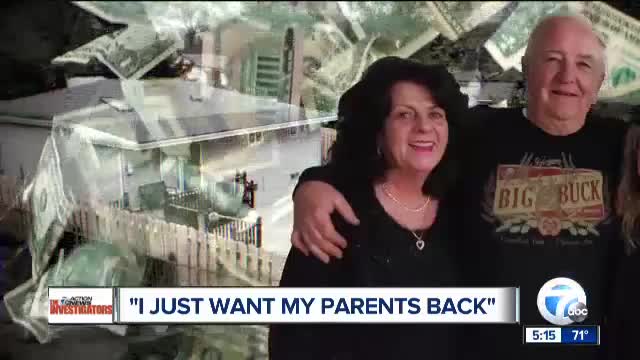 A court hearing was held Monday for a controversial guardianship case that 7 Action News has been following.

MOUNT CLEMENS, Mich. (WXYZ) — A local woman’s battle to get her parents back from a guardianship company that placed them behind a locked fence continued in Macomb County court Monday. The 7 Investigators have been following Marcie Mitchell’s case for weeks, and thanks to our reporting, so is the Attorney General.

On Monday, the guardianship company officially resigned but Mitchell still does not have her dad and step-mom back in her care.

In November, Mitchell petitioned Macomb County Probate Judge Kathryn George for guardianship of her dad, Bob Mitchell, and her step-mom, Barb Delbridge. Bob and Barb are both suffering from dementia and other mental health issues.

Under Michigan law, Mitchell has priority to become the guardian. However, Judge George instead appointed Caring Hearts Michigan Inc., which is owned by Cathy Kirk.

Kirk then hired her own company called Executive Care to provide caregivers and bill Bob and Barb’s estate that’s worth about $2.7 million. Kirk is married to Macomb County Public Administrator and probate attorney Robert Kirk.

“I’m not a bad daughter, I’m not a bad person; I never have been," Mitchell told 7 Investigator Heather Catallo outside the courtroom Monday. "The only thing I want is for my parents to be safe and happy, and right now that’s not happening.”

After 7 Action News showed you how the caregivers installed a 6-foot-tall privacy fence around Bob and Barb’s Utica home, and cut off family visitation for them, Judge Biernat removed Judge George from the case. And now Caring Hearts is gone too.

“You are now officially off the case,” said Judge Biernat Monday.

But instead of granting Mitchell and another relative guardianship, Mitchell says she was blindsided yet again in front of a courtroom packed with supporters.

In guardianship cases, someone called a Guardian Ad Litem, or GAL, who is supposed to meet with the wards, explain their rights and then turn in a report seven days before a hearing. GAL Philip Adamaszek did not give the attorneys his report until after Monday’s hearing.

The GAL read from that report that repeated several allegations involving Barb that were made by Caring Hearts. Mitchell and her attorney say they are false.

The GAL also admitted to the judge that he never interviewed Mitchell, or her aunt, Anita Little, who are trying to become co-guardians now. He told the judge he only talked to the wards and to the former Caring Hearts caregivers.

“Did you talk to Marcie Mitchell or Anita Little,” asked Judge Biernat.

“Not at that time your honor,” Adamaszek said.

“How much direct knowledge do you have of what you just presented to the judge,” asked 7 Investigator Catallo after the court hearing.

“Personal knowledge of having witnessed the events? None,” Adamaszek said.

“I am extremely disappointed in the GAL's report that came into play at 9 a.m. this morning, not last week, so no lawyers got to review it, which in turn was concerning to me," Mitchell said. "They went back to Caring Hearts to obtain information but never even spoke to Anita or myself or any family members. And the statements in the GAL's report were not factual at all. It’s very hurtful, not only hurtful to me, but my friends, my parents, my family that have stood by us this entire time. We thought we would walk in today and walk out with our parents. That didn’t happen.”

The judge will hold a full evidentiary hearing June 26 to give everyone time to review the GAL report. For now, a new temporary professional guardian will stay in place.

The Public Administrator for the State of Michigan, Michael Moody, was in court Monday to observe for the attorney general.

Attorney General Dana Nessel and the State Supreme Court are looking into this case. The Attorney General’s Elder Abuse Task force is working right now to change some of the guardianship rules.

Heather Catallo will have an exclusive interview with the attorney general later this week about those changes.