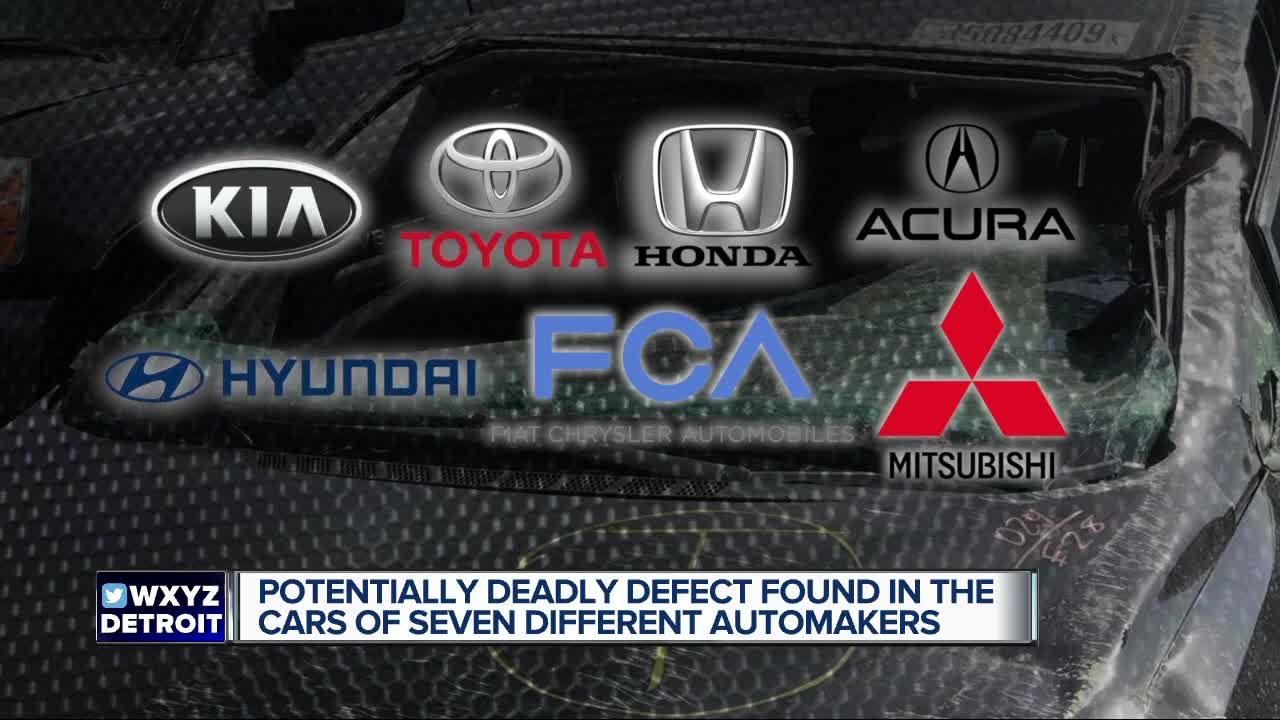 A potentially different defect has been found in the cars of seven different automakers.

Almost every car has built-in safety features, like seat belts and air bags; some even have more technology aimed at giving drivers peace of mind when behind the wheel that they'll be protected in a crash.

It's what the Perry family said they hoped would help 23-year-old Kamiya Perry, when her car flipped while on a road trip to California in April.

Kamiya, she says, suffered a traumatic brain injury in April after she and her brother crashed on their way to a family get-together in California. Her brother, according to the Perry family, was driving, and tried to make a U-turn, causing the crash.

“She is not as outgoing, before this, she was a go-getter," Perry added. "Now, she needs a lot of supervision and she’s more child-like.”

The crash itself was damaging, but Kamiya's family didn't see any indication any of the air bags inside her 2015 Kia Forte went off, making her injuries even more severe.

“There was a fury that came in because perhaps this could’ve been prevented," said Perry.

The National Highway Traffic Safety Administration is investigating at least 15 crashes where drivers reported air bags failed to deploy. The issue stemming from the part tasked with controlling the safety restraint systems in a car: the air bag control unit.

NHTSA's Office of Defects Investigation launched a probe into certain Kia models in 2018, after several reports of similar crashes where drivers said air bags failed to deploy. Two crashes involved 2012 and 2013 model year Kia Fortes. In 2018, NHTSA said it was aware of six crashes. In total, the crashes resulted in four fatalities and six injuries. That investigation expanded this year.

"These control units may suffer electrical over-stress due to harmful signals produced by the crash event, causing the unit to stop working during the crash," outlined a 2019 NHTSA report.

"Assessment of these incidents found that at least five (5) of the vehicles experienced confirmed damage to the vehicle electrical system during the crash, which produced electrical over-stress (EOS) damage to an internal ACU component, specifically an application specific integrated unit circuit (ASIC). In these confirmed incidents, the EOS failure of the ASIC subsequently prevented deployment of one or more air bags and/or other restraint system components during the crash event," according to NHTSA's letter.

The Perry family is suing Kia for $2.5 million, arguing Kia never issued a recall for the 2015 Kia Forte before the crash that left Kamiya Perry with permanent brain damage.

“These are very, very large multi-billion dollar companies that could issue this recall and fix this problem with the snap of the fingers. And yet, they are refusing to do it because they are putting profits ahead of human lives," said Jonathan Michaels, a California-based attorney now representing the Perry family. Michaels also filed a class-action lawsuit against all seven automakers in July, claiming the companies have "concealed a deadly air bag defect in 12.3 million U.S. cars."

However, some auto makers argue they have issued recalls for affected cars.

In June 2018, both Kia and Hyundai filed recalls, according to NHTSA.

"The recalled vehicles used ACUs that had the lowest levels of ASIC protection, while non-recalled Hyundai and Kia products using subject ACUs had higher levels of protection."

It does not include model year 2015 Kia Fortes, the same model year car Kamiya was in five months ago.

Chrysler/Fiat issued a recall for certain model year Chrysler, Jeep and Dodge products also manufactured with the same ACU in September of 2016, added NHTSA. "FCA noted that the defect condition had only been observed in vehicles equipped with sensor harnessing routed across the front of the vehicle."

"The crashes involved a MY 2018 and MY 2019 Corolla equipped with the subject ACU that incorporated higher levels of ASIC protection," according to NHTSA's report.

"NHTSA is investigating to determine whether an unreasonable risk to safety exists that would require further action," said Rebecca Neal, a Department of Transportation spokesperson in response to ABC15's questions regarding a potential outcome of their investigation.

They did not elaborate when asked whether NHTSA could compel auto makers to issue a recall or expand previous recalls to include other model year vehicles.

Neal did say there are laws when it comes to when to issue a recall, if automakers are aware of a problem.

"Manufacturers are required to submit information to NHTSA about a recall no later than five working days of their decision that a safety defect exists in their vehicle or equipment." said Neal.

To see all makes and model years included in NHTSA's investigation, click here.

Five of seven listed auto makers have issued statements to ABC15 in response to the newly filed suit:

"Honda is aware that the National Highway Traffic Safety Administration (NHTSA) has initiated an Engineering Analysis of certain Supplemental Restraint System (SRS) control units supplied by ZF-TRW based on a small number of airbag non-deployment crashes in other automakers’ vehicles. Honda will cooperate with the NHTSA through the investigation process, and we will continue our own internal review of the available information," said spokersperson Chris Martin, who represents both Honda and Acura. "The safety and security of Hyundai customers is our highest priority. We actively monitor and evaluate potential safety concerns with all of our vehicles and act swiftly to recall any with safety-related defects. "

"In 2018, we recalled (NHTSA 18V-137) approximately 580,000 2011-2013 Hyundai Sonata and 2011-2012 Sonata Hybrid vehicles to address potential circuit damage to the ZF TRW airbag control unit (ACU) electronics that can occur during an accident and result in airbag nondeployment. When a vehicle is brought in for the recall repair, the Hyundai dealer will install an external wire filter kit that will prevent electrical overstress in the airbag control unit. This is performed at no cost to the customer. Hyundai has conducted an extensive evaluation of this issue and we are confident we have recalled every Hyundai vehicle with ZF TRW ACUs that are susceptible to electrical overstress. We continue to work closely and cooperate fully with NHTSA in their ongoing investigation," added Michael Stewart, a Senior Group Manager for Hyundai.

Representatives for Chrysler/Fiat (FCA) cited NHTSA's 2019 report, stating "ODI did not identify any EOS failures in the non-recalled FCA population."

Neither Toyota or Mitsubishi responded to request for comment.

Representatives for ZF-TRW, the maker of the air bag control unit in question said, "We have no comment on this pending litigation. However we are working closely with our OEM customers and NHTSA on this matter."