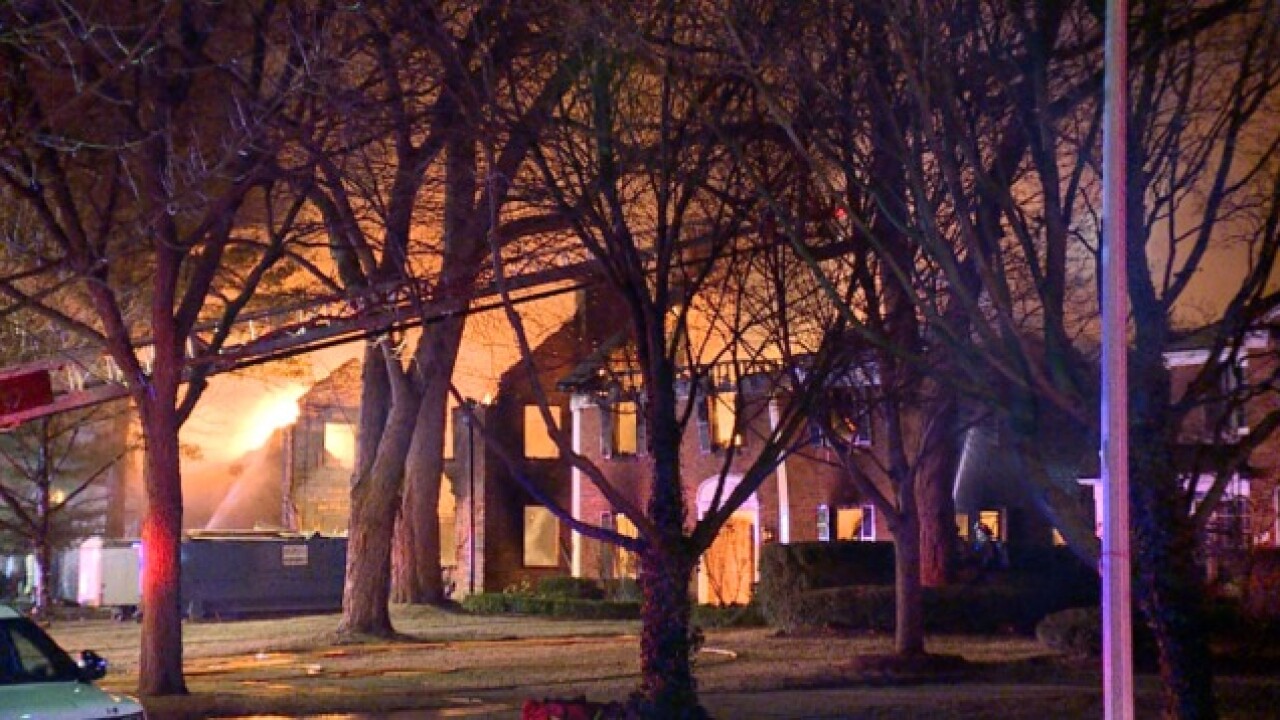 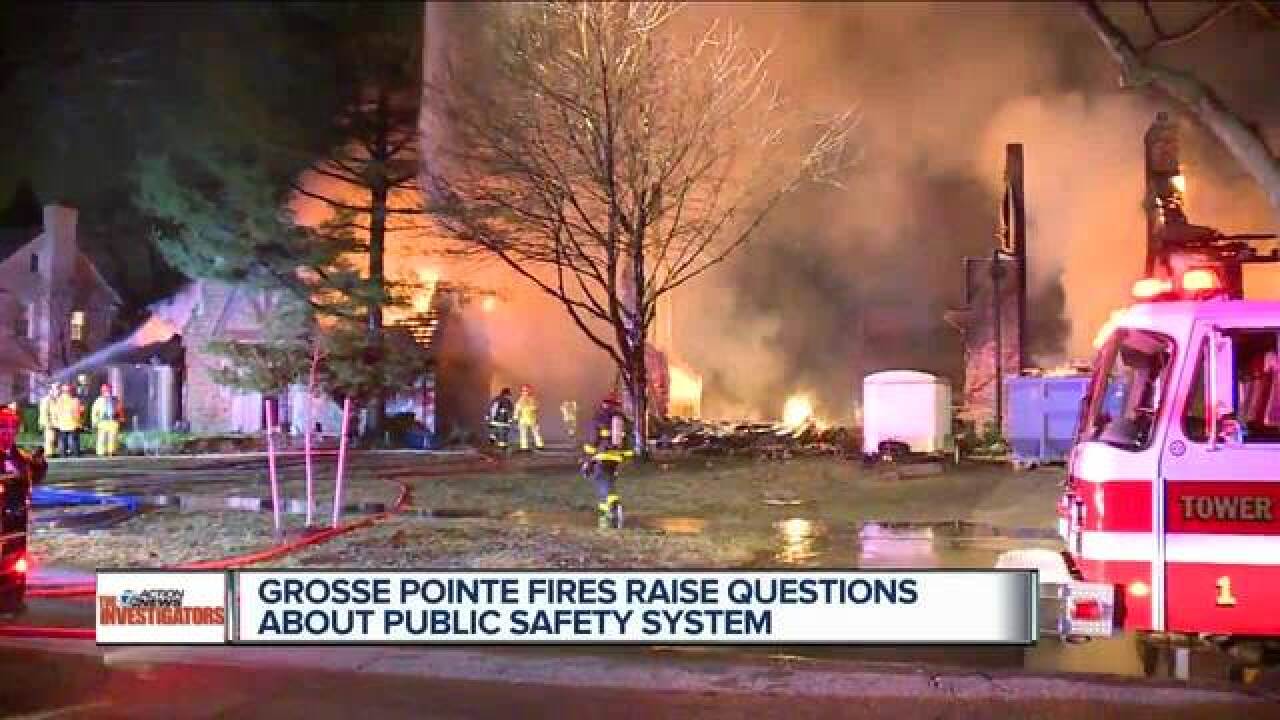 If you live or work in a city that uses a Public Safety Department, that means your police officers are also likely your firefighters:  They do both jobs.

Some firefighting experts say the Public Safety system may not be keeping us safe after all.

So the 7 Investigators are taking a look at whether this cost-saving measure could cost families their homes, or even their lives.

On March 26, 2018, neighbors along Washington Road in the city of Grosse Pointe watched in disbelief as three homes burned to the ground.

The fire started in the middle home that a contractor had been remodeling for sale. In dashcam video from a Grosse Pointe Public Safety patrol car, you can see the flames from a block away.

Ultimately, Grosse Pointe called for help from 7 neighboring departments. The houses on either side of the home under construction had families living in them, and some are now questioning why both of those buildings were total losses.

“I have never had a house, even if it was under construction, get to the point where just the chimney is standing.  That’s crazy,” said Mark Docherty, President of the Michigan Professional Firefighters Union.

They’ve been trying to prevent more cities from turning to the Public Safety model that the Grosse Pointes, and dozens of local communities like Berkley, Fraser, Oak Park and others use.  Docherty says Michigan has 37 Public Safety departments that use police officers who cross train as firefighters, while other states only have a few, if any.

There’s an entire website dedicated to pointing out what critics call the flaws in cross-training police officers to fight fires.

“They don’t have the time to train like we do,” Docherty told 7 Investigator Heather Catallo.  “Because of the way they have to get mutual aid to help fight a fire, the way they have to assemble their teams --it’s just common sense that houses are going to burn longer before they get someone in to fight them. The longer it burns, the more property loss.”

Grosse Pointe officials say the public safety system saves money, and gets their officers on to a scene very fast.  But that’s because Public Safety officers often respond in a patrol car, not a fire truck.  And then they have to change clothes, stow their weapons, and wait for a ladder or pumper truck.

If you listen to the radio traffic from the night of the Washington fires, you can hear the Public Safety Officers telling each other to “suit up.”

Radio: “All manpower on scene, suit up… All cars on Washington go to the fire channels. Suit up…  Have someone grab my fire bag…. 68 on 2: I’m here.  I’m going to suit up and wait for the engine.”

“The difference is with a career firefighter, we’re going to respond to the scene in our apparatus, in our gear, with air packs on, with our tools.  We jump off that engine and we go to work immediately, there’s no delay,” said Docherty.

“Someone is going to die and it’s going to be unnecessary.  And it’s because they won’t step up and do anything,” said lawyer Gary M. Wilson.

Wilson is a fourth-generation Grosse Pointer, and a very outspoken critic of his city’s Public Safety Director.

“There’s a complete lack of training for fire officials, in particular, the Director of Public Safety, Stephen Poloni,” said Wilson.

Director Stephen Poloni runs the Public Safety Departments for both the city of Grosse Pointe, and now, neighboring Grosse Pointe Park as well.  He’s responsible for the safety of about 17,000 people.

The State Fire Marshal’s office has no record of Poloni doing any fire training or certification in the last 30+ years.  Poloni would not talk to the 7 Investigators on camera, but did say he is a certified firefighter and was grandfathered in from before the state’s record keeping.  He later provided certificates from two weeks of “Firemanship” classes in 1983.

“If you have a chief who isn’t even paying attention to his own credentials, that’s a problem,” said Wilson.

The state also thought it was a problem for Poloni after a fire inside the Jim Saros Real Estate Services building in 2016. The building had been on the corner of Mack and Cadieux for 40 years.

The Michigan Occupational Safety and Health Administration, or MIOSHA, fined Poloni’s department $3,500 after the Saros fire. Grosse Pointe got three serious violations for failing to train their Incident Commander and other Public Safety employees.

“The Incident Commander is very critical on a fire scene because he runs the entire scene.  The safety of everyone on that scene and the operation depends on that one individual.  So that individual is going to direct the tactics used, direct all the different companies of where they need to operate and how they need to operate.  Without oversight and without communication and span of control, people get hurt,” said Docherty.

“I know they fought the fire very, very hard. It was discouraging that it wasn’t able to get contained though,” said Jimmy Saros.  He tells the 7 Investigators that the Grosse Pointe officers were on the scene within moments of Saros and his staff smelling smoke.

“We kind of anticipated it would just be a fire drill, and 18 hours later, the building was totaled,” said Saros.

“I know it’s on their radar now,” said Saros. “I trust they’re very professional guys on the police force;  they’re the dual trained fire fighters, so I trust that whatever they feel is going to be best to help keep the community safe, they’re going to do that,” said Saros.

As for the Washington fires, Michigan State Police say the cause is “undetermined.”  Director Poloni and other fire officials on scene that night say there wasn’t much more they could have done, the fire just moved too fast to the neighboring houses.

"Police and fire are vital.  So the expectation is, yes we’re taken care of.  And the expectation is, there are professionals at the helm of those departments, and of those city governments-- who will spend the money wisely, hire the right people, and make sure that when they hire them, they’re trained,” said Wilson.

After the MIOSHA violations, Director Poloni says all of the staff below him have now been trained and certified with the state.

The City of Grosse Pointe has had a Public Safety Department since the early 1980’s.  This model, also employed by all of the Grosse Pointes and at least 50 other communities across Michigan, cross trains its officers to be qualified to respond to both police and fire emergencies.  In small communities such as Grosse Pointe, this model increases availability of all staff on duty to handle emergencies whether they are police or fire calls, and often allows for quicker response times.  The Grosse Pointe communities support each other during emergencies utilizing a Mutual Aid Agreement that includes automatic fire aid from adjacent communities when fires occur.

The City of Grosse Pointe Public Safety Department and the multiple other departments fighting the fire on the 500 block of Washington on March 26 did an admirable job responding to an intense fire that had fully engulfed one unoccupied home before the first 911 call was even received.  Fifteen mile per hour winds whipped the fire into the two adjacent homes, which started in a house under construction full of combustible materials and created a huge blaze. Through the extraordinary efforts of the City’s firefighters, led by incident commander Lt. Alan Gwyn, and of the firefighters from our mutual aid partners and the City of Detroit and the City of St. Clair Shores Fire Departments, the fire was contained.  These were difficult losses for the homeowners and for our community.  All of the more than forty firefighters from the eight different departments who responded should be commended for their work to contain the fire and to prevent anyone from getting hurt.