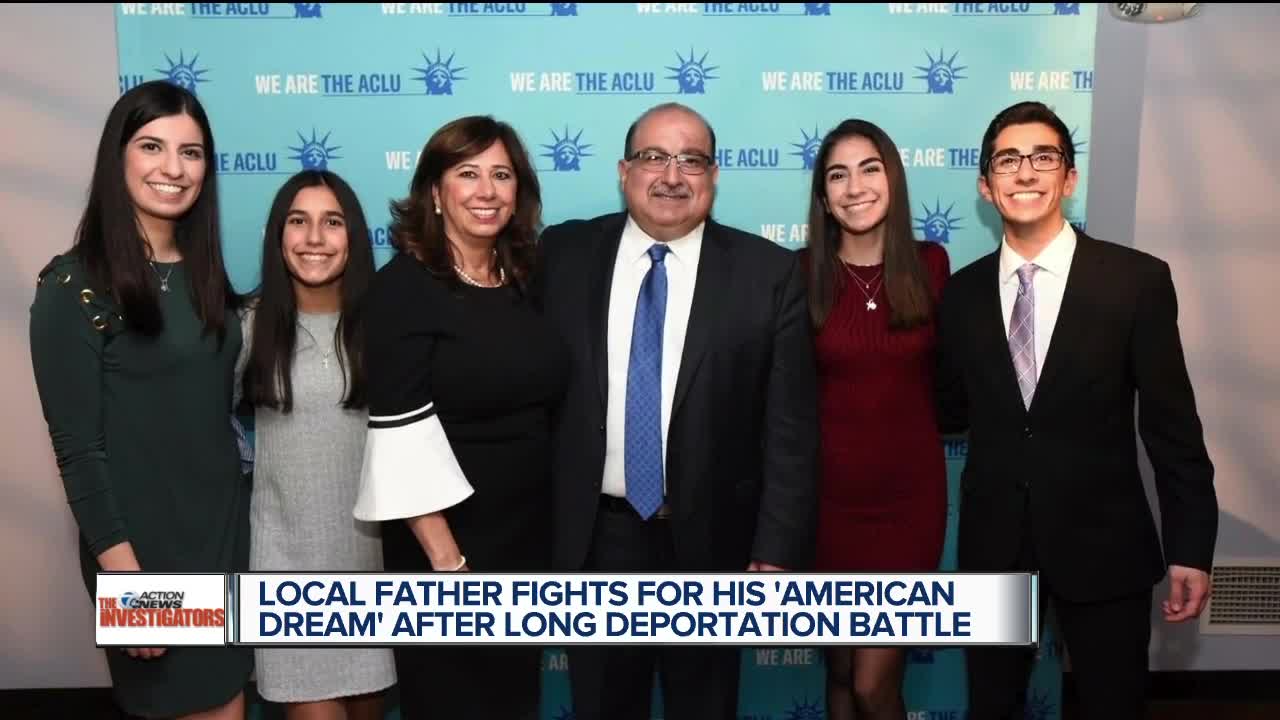 He has been the face of the Iraqi deportation fight here in metro Detroit. Now after a 2 1/2 year legal battle, a judge has ruled Sam Hamama can stay with his family in West Bloomfield.

WEST BLOOMFIELD, Mich. (WXYZ) — He has been the face of the Iraqi deportation fight here in metro Detroit. Now after a 2 1/2 year legal battle, a judge has ruled Sam Hamama can stay with his family in West Bloomfield.

The 7 Investigators were the first to take you inside the lock-up facility where Hamama was being held back in 2017.

“Please, please give us a chance to stay as a whole family,” said Hamama at the time.

Now he’s talking exclusively with 7 Action News about his recent victory in immigration court, where his American Dream is coming true.

“Let me tell you, it’s the best feeling in the world,” said Hamama.

For three decades, Hamama lived and worked with the constant fear of deportation.

“On your tippy toes, you never wanted to make a mistake,” said Hamama.

That’s because back in 1986, at the age of 23, Hamama did make a mistake. He got into a road rage incident and pointed an unloaded gun at another driver.

“I was young, foolish, and stupid,” said Hamama of the crime.

He spent a year in prison, got out, and quickly turned his life around: managing grocery stores, raising money for his Chaldean Catholic church and helping his community.

“Sam is the American Dream. He came here when he was 11. He married a beautiful woman, has 4 amazing charming kids, that are all going to be positive American contributors,” said immigration lawyer Randy Samona.

But that felony conviction prevented Hamama from becoming a U.S. citizen. His deportation order hung over his head, although it never became a real threat until a 2017 executive order from President Trump.

"For 30 years – over 30 years – the United States government has said that Iraq is too dangerous of a place to send people. And in 2017 when it was arguably worse, suddenly the US govt was saying, it’s safe to send people back. It’s absurd. It was outrageous,” said attorney Bill Swor.

Immigration and Customs Enforcement Agents arrested Hamama and hundreds of others in June of 2017.

Nahrain Hamama feared deportation to Iraq would have been a death sentence for her Christian husband. With a tattoo of a cross on his wrist, she feared he would face torture in a country in turmoil.

“With his health condition and the way the country is in chaos, there was nothing for him there. He would not have survived that’s for sure,” said Nahrain Hamama.

In a race to beat the planes leaving for Iraq, the ACLU filed an emergency class action lawsuit on behalf of all 1400 Iraqi nationals trying to fight their deportation orders – and they named Hamama as the lead plaintiff.

A federal judge granted them a stay, giving Hamama and others time to make their cases in immigration court.

“Giving them time for due process to happen… That time that Judge [Mark] Goldsmith granted them, that has saved many, many lives, and allowed many, many families to be together,” said ACLU Senior Staff Attorney Miriam Aukerman.

“It was amazing,” said Hamama. “I just never thought this day would come.”

“What are you most looking forward to,” asked 7 Investigator Heather Catallo.

“Voting. I think it’s a right that Americans have that they don’t appreciate. For the last 32 years, since this happened I always thought that I cheated myself by not having the opportunity to be able to vote. It’s a right that someone should appreciate. I can’t wait to vote,” said Hamama.

Dozens of others have been allowed to stay, but the ACLU’s fight isn’t over.

“There are many, many more who are still waiting, who were locked up with Sam at the very beginning of this case, and still have not had their day in court,” said Aukerman.

Sam Hamama has already filled out the application to start the citizenship process.

The ACLU says dozens of other families involved in the lawsuit have been allowed to stay in the US, but some parts of the class action lawsuit have been overturned which means this fight could end up in front of the Supreme Court.