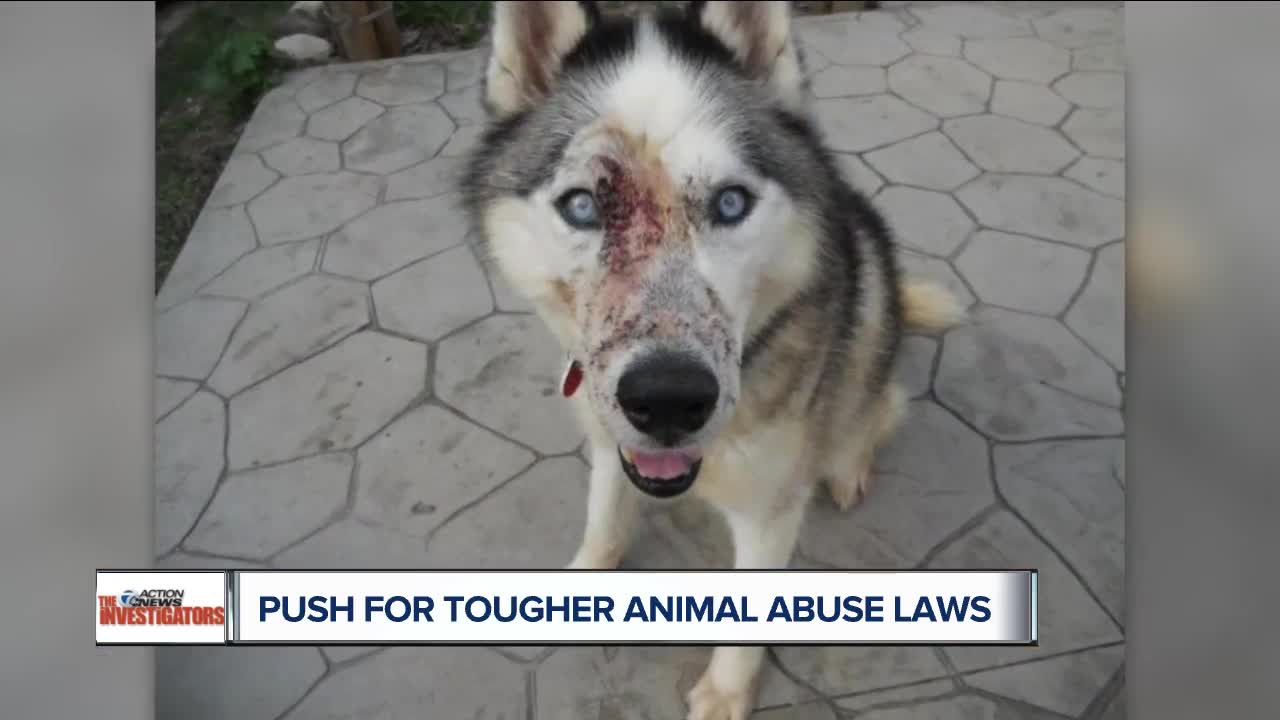 For years, both animal advocates and prosecutors have been calling for tougher laws for animal abusers. Now, change is on the way with two new bills that could be sent to the Governor for signature within days.

LATHRUP VILLAGE, Mich. (WXYZ) — For years, both animal advocates and prosecutors have been calling for tougher laws for animal abusers. Now, change is on the way with two new bills that could be sent to the Governor for signature within days.

Right now, in even the worse cases of animal abuse and torture, the most someone can get is four years in prison. Usually defendants get far less time than that. But with the new bills, some forms of animal abuse will become a 10-year felony.

Even when the alleged abuse is caught on video, these crimes are not always easy to prosecute.

When there is a conviction, prosecutors say the sentencing laws don’t go far enough to allow them to keep known predators behind bars.

Under the current law, Walton says killing or torturing animals is a 4-year felony. That may sound like a long time behind bars, but because animals are treated as property under the law, sentencing guidelines limit both prosecutors and judges.

In some cases, such as what happened to the puppy known as Rumble in Clarkston, the crime ends up only being a misdemeanor.

The sentencing rules frustrated Oakland County assistant prosecutors in the case of Timothy Crow as well.

“This is the worst act of cruelty I have seen. It’s a deliberate hanging of the family pet. And the cruelty – it’s one of those cases, I’m not going to be able to forget the images I saw,” said Oakland County Assistant Prosecutor John Pietrofesa.

Crow pleaded guilty to hanging and beating to death his mother’s dog, Bella. Police say the 23-year-old from Lathrup Village videotaped the whole crime, sent the video to a friend, and then left the dog in her crate so his mother would find her.

“And the defendant thought this was entertainment,” said Pietrofesa during Crow’s sentencing Tuesday.

Police reports show Crow admitted to harming every pet his family had ever owned.

“He also has said he has experienced feelings and desires to hurt people,” said Oakland County Circuit Court Judge Leo Bowman. “I’m not a psychologist but I appreciate that that’s going to be a precursor to more serious conduct.”

Prosecutors asked for a year in jail with five years of probation. In the end, Judge Leo Bowman gave Crow six months in jail and four years of supervision, with a promise that with one misstep, Crow will be sent to prison. The judge also ordered mental health treatment.

“This is your one opportunity to address whatever is going on with you,” said Judge Bowman.

“I’d like to apologize to my family and the community. And to the court and to all the dog lovers. I’m very remorseful for what I did,” said Crow.

House Bills 4332 and 4333, sponsored by Rep. Tommy Brann (R-Kent) have passed both the Michigan House and the Senate.

The 7 Investigators will keep an eye on the bills this week to see if the Governor signs them.