Drone pilots in demand; Experts predict 1,500 drone jobs to pop up in Michigan 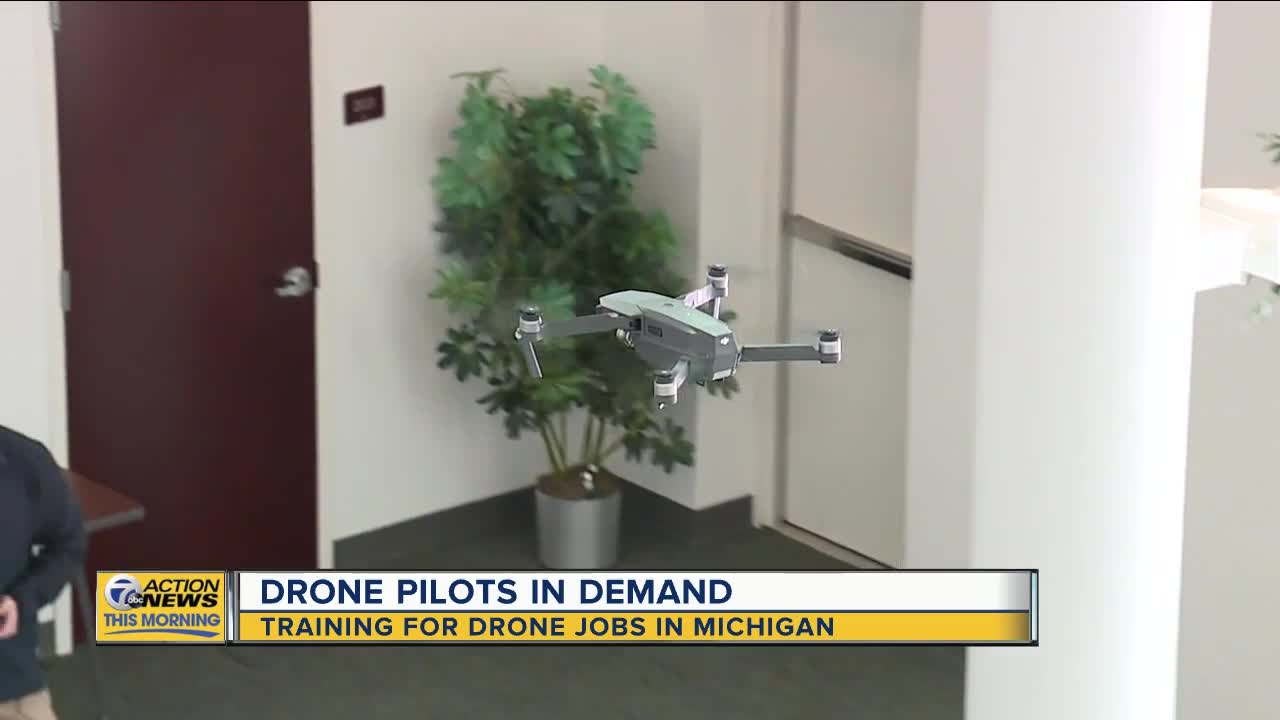 It’s been predicted that more than 100,000 jobs will be created by unmanned aircraft system technology.

MONROE, Mich. (WXYZ) — If you haven’t spotted a drone flying in the sky, you’ve likely not been paying too much attention. What started to look like a fad a few years ago — kids flying toy drones, hobbyists flying more expensive tech-gadgets — is now becoming commercialized quickly.

In Garden City, the phone inside Excel Drones seems to be ringing on an endless loop.

“We’re finding a majority of the sales are commercial, the drone industry is carving out a larger and larger niche over time.”

At Monroe County Community College, the shift hasn’t gone unnoticed. It’s been predicted that more than 100,000 jobs will be created by unmanned aircraft system technology: drone pilots, repairmen/women and programmers are all in high demand. In Michigan alone, according to the Association of Unmanned Vehicle Systems International, an estimated 1,500 jobs will be added — those jobs are expected to account for an economic impact of $11.3 million.

The uses are already increasing exponentially across various fields, which is why they’ve launched a new program to prepare soon-to-be drone pilots.

“Jobs that would take hours can be done by a drone in mere minutes,” said Adam Knaggs, as he flies a drone inside a building on campus.

Knaggs, a law enforcement officer, got his start in drones a few years ago — he was tapped by the community college to prepare an 18-hour course that meets over the course of four weekend days in early March. The goal is to prepare students to pass the Federal Aviation Administration’s unmanned commercial pilot certification.

“We’re going to teach people how to fly a drone that’s non-GPS enabled,” he explained. “That way you have to give constant input to control, if you can fly that you can fly anything.”

A commercial license is needed to fly drone for a variety of business-related jobs. Even while Knaggs showed off a few of his drones to our news crew, another instructor from Michigan State stopped in to get a closer look at his work, he noted that agriculture students needed to learn the technology soon because it helps check crops quicker than ever before, and can be helpful when insurance claims are needed.

Other jobs are finding uses, too. Realtors are finding that commercial real estate photos are easier to take now that drones come with 4K cameras. Power lines can be checked out following major storms. Wind turbines can be inspected with less need to scale the structure, while construction workers can now measure fill dirt, rock and other materials in minutes instead of hours of measurements and calculations.

The cost of the course at Monroe County Community College will meet on March 2, 3, 9 and 10 from 8:30 a.m. until 1 p.m. The cost of the course is $1,490 — there is a discount for seniors. The course is considered non-credit as it will be focused on preparing students for certification instead of credit. If you’d like to learn more about the class, or register you can call (734) 384-4127. If you’re a previous student, you can sign up online here.