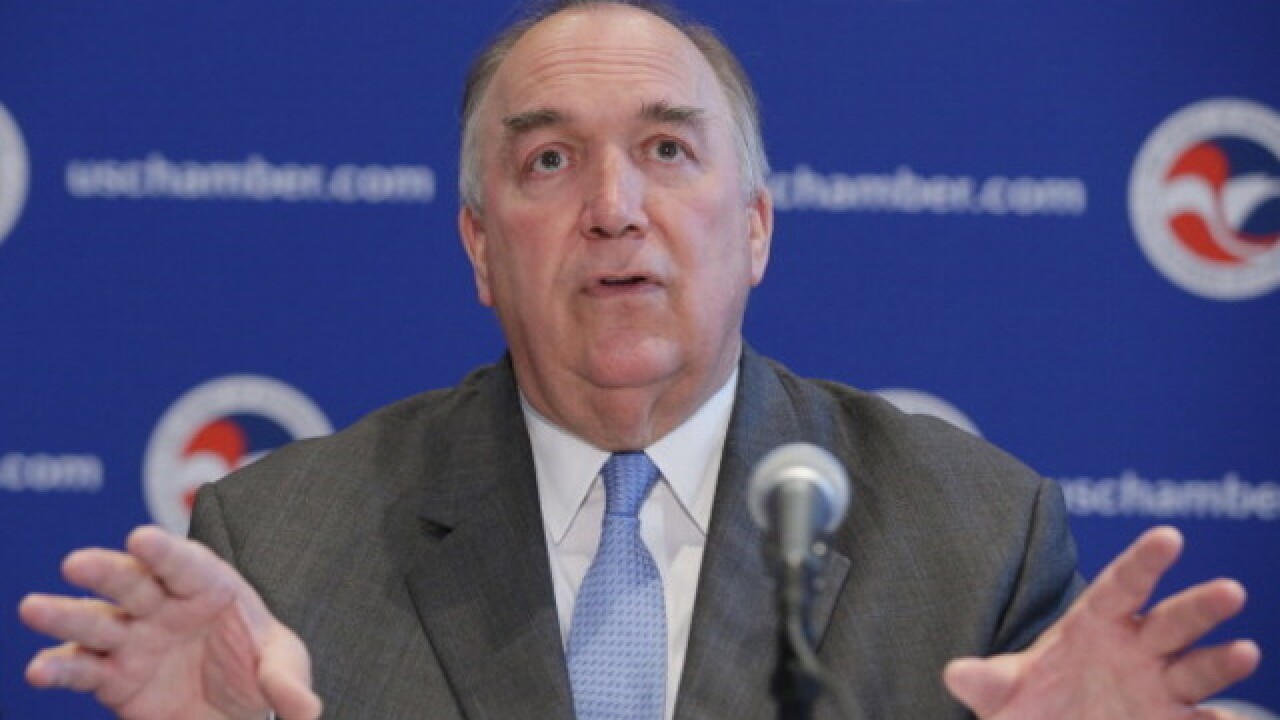 Copyright Getty Images
Chip Somodevilla
<p>WASHINGTON, DC - JULY 09: Business Roundtable President and former Michigan Gov. John Engler speaks during a news conference that is part of a 'Day of Action for Immigration Reform' at the U.S. Chamber of Commerce July 9, 2014 in Washington, DC. According to a Partnership for a New American Economy survey supported by the business leaders, 86-percent of those polled want Congress to undertake immigration reform and 70-percent said they would vote for a presidential candidate from a party that is viewed as supporting immigration reform. (Photo by Chip Somodevilla/Getty Images)</p>

Kaylee Lorincz, an 18-year-old survivor of Larry Nassar alleged a secret attempt by MSU Interim President John Engler to settle her civil suit against the university.

She said Engler asked her if she would settle the suit for $250,000 without her attorney being present.

Lorincz said MSU Special Counsel to the President was present at the meeting that took place on March 28.

Read her full statement below:

“My name is Kaylee Lorincz and I am first and foremost a survivor. In December, I described to you bits and pieces of my assault by Larry Nassar. While on two separate occasions I heard apologies, I have yet to see any action by this board to back your statements. In fact, I am continually shocked by your lack of action and Interim President Engler’s callous and disrespectful words.

When my Mom and I stopped in to sign up to speak at this morning’s meeting a few weeks ago, we happened to see President Engler. I asked if we could speak to him, just so that I could introduce myself, as a Survivor of Larry Nassar. My hope was that maybe if he actually met a survivor he might become more empathetic to what we’re experiencing. He has said some hurtful things and I wanted him to know that when he does that he causes me to feel victimized all over again. He told us he would see us if we could wait a few minutes.

While we waited, we were met by Emily Gerkin Guerrant, Vice President and University spokesperson. She talked to us for about a half an hour then brought us into the meeting. President Engler introduced us  to Vice President Carol Viventi He did not tell us that Ms. Viventi was his lawyer.

We sat in a conference room where I briefly told President Engler my story. I told him how much I love MSU and wanted to help them heal, to make real change. He explained all of the new things they’ve implemented, which sounded promising, but said working together couldn’t occur until the civil suits are settled.

Mr. Engler then looked directly at me and asked, “right now if I wrote you a check for $250,000 would you take it?” When I explained that it’s not about the money for me and that I just want to help, he said “well give me a number.” He also said that he had met with Rachael Denhollander and that she gave him a number.

I felt like I was being bullied into saying something and that if Rachael gave him a settlement amount, it was okay for me to do it too. I said again, it’s not about money.  Carol Viventi said “Well you’re in civil litigation, aren’t you? That’s what a civil case is about, money.”

Since then, I have spoken to Rachael and asked her about that meeting, but it turns out that Rachael has never met with Mr. Engler and more specifically, never gave him a dollar amount.

At this point I was feeling pretty bad. President Engler and his lawyer had just tried to coerce me into settling a lawsuit without my attorney present.

Then, President Engler started saying how sad it was that hundreds of good osteopathic doctors at MSU are being judged by one...one...bad doctor.

My Mom interrupted and said well what about former Dean Strampel? Wasn’t he just arrested? President Engler rolled his eyes and attempted to fluff it off and said “oh that was no big deal, it was only just a slap on the butt.”

My Mom and I were both so shocked. My jaw dropped, and I said “just a slap on the butt? Larry did that to me too and look how that turned out.” He implied that this was much different than Larry. President Engler then tried to back up his statement saying, “well there are different degrees of murder.” I then told him, murder is still murder no matter how you do it.

After that meeting it was clear to me that nothing would change and that President Engler viewed meeting me as an opportunity to gain information, continuing to deflect and defend.

President Engler YOU wanted to talk about money, I wanted to talk about helping and healing. You tried to make us feel like WE were the problem and MSU was the victim because of the civil suits. THIS is how it works. When you protect and promote a sexual predator, and foster a culture of lies and cover ups, YOU are responsible.”

I met with Kaylee and Lisa Lorincz’s on March 28. Also in the meeting were Carol Viventi and Emily Guerrant. We felt it was important to hear her experience as a survivor first-hand, as well as her ideas on how to improve our processes and culture. Given the current litigation, opportunities to speak with survivors are rare.

Our memories and interpretations of the March 28 meeting are different than hers. I am sorry if anything said during the meeting was misunderstood. Regardless, since mediation of all claims begins on April 25, there will be an appropriate place for discussions concerning what would be a fair and equitable resolution.

We, too, hope for a joint resolution to these heinous crimes. We’ll be working for an equitable settlement to allow all the survivors to move forward in their process of healing.