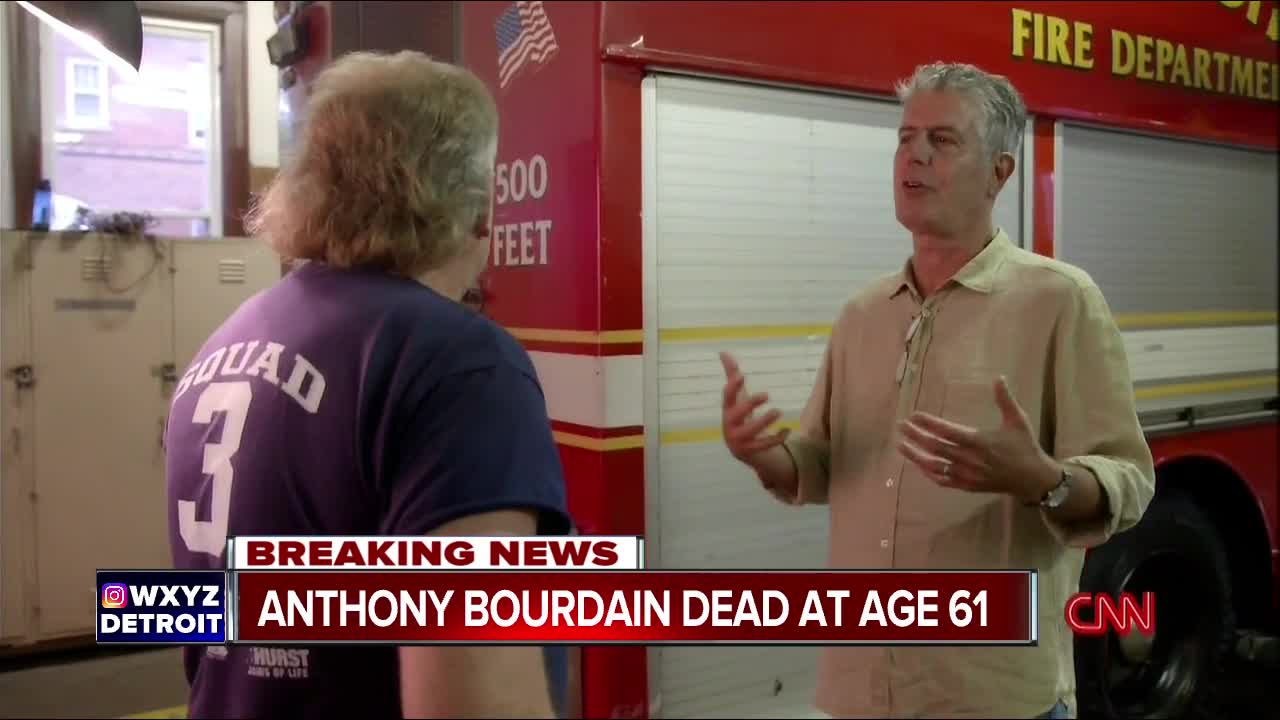 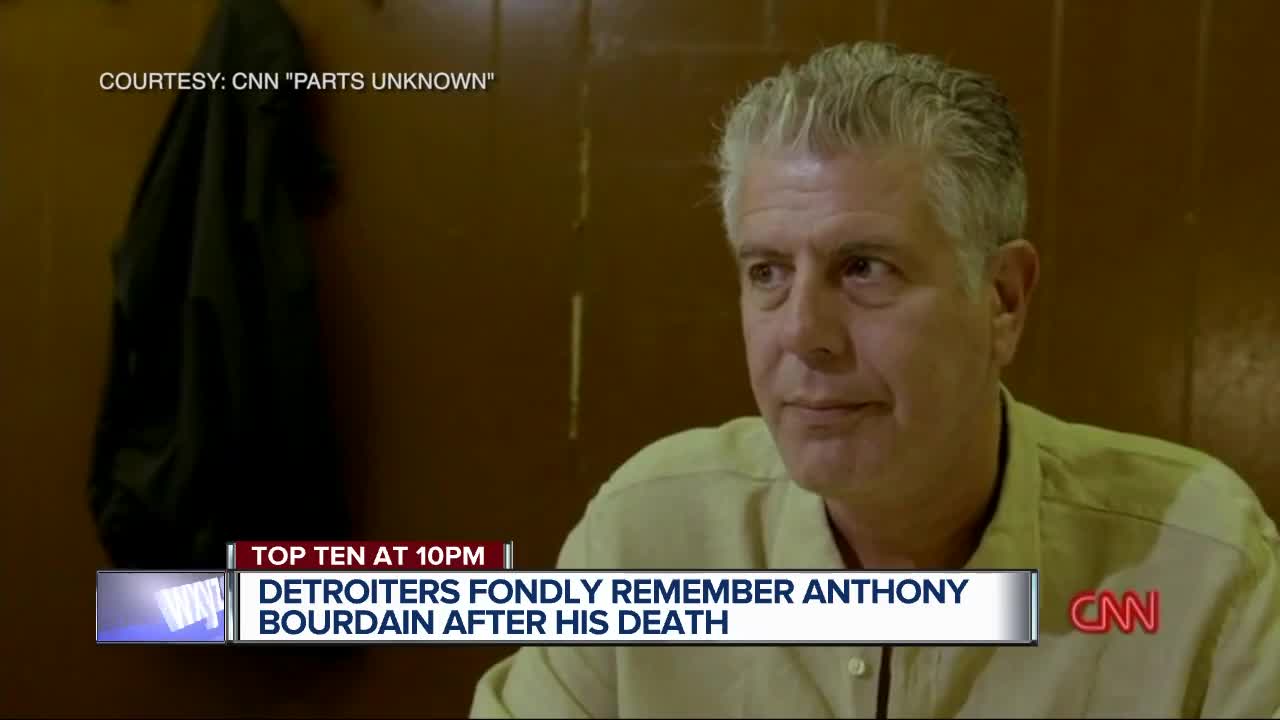 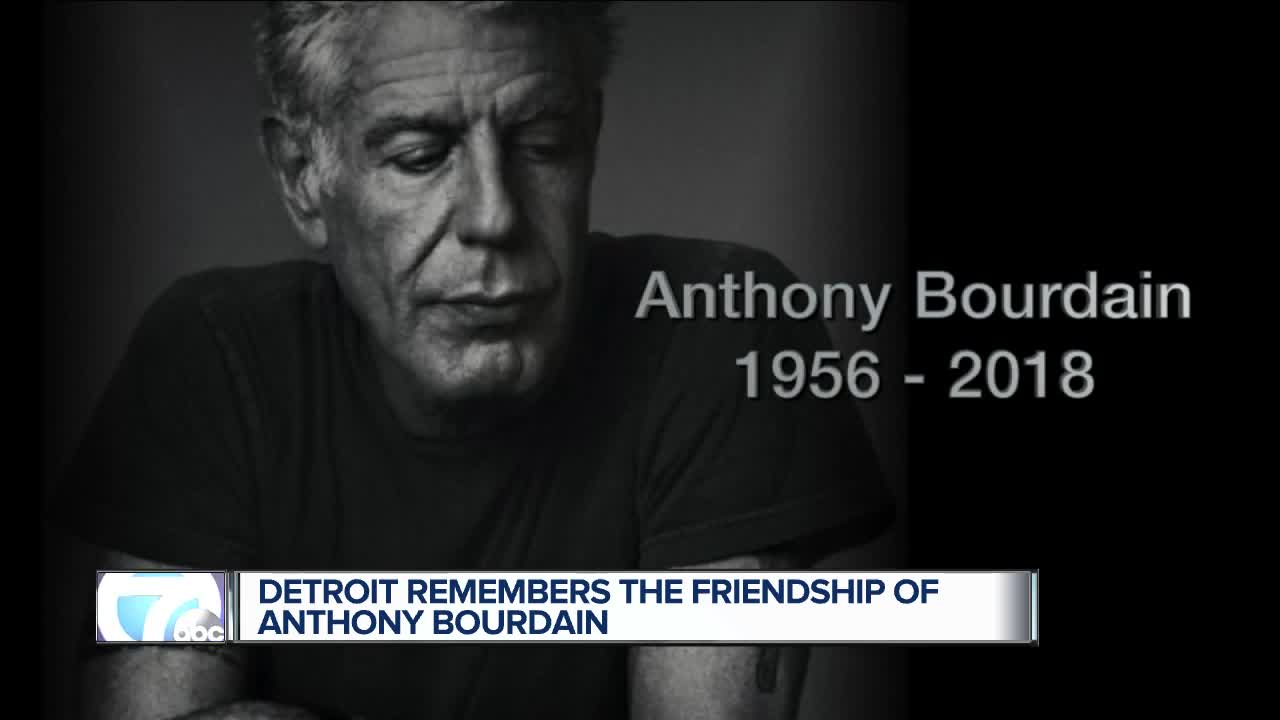 Anthony Bourdain, a famed travel host and writer, recapped his trip to Detroit in 2013 for his CNN show "Parts Unknown," saying among other things, "Detroit isn't just a national treasure. It IS America."

His trip to Detroit aired in 2013 and was the final episode of the show's second season.

Bourdain killed himself on Friday morning. He was 61 years old.

"I think it's one of the most beautiful cities in America - still," he wrote.

Read his entire blog post below. (Caution: There is graphic language)

The last episode of our second season of PARTS UNKNOWN.
And I’m glad it’s set in Detroit. Because Detroit, for many Americans, is an abstraction—truly, if incredibly, a part unknown.

One only need look at some of our representatives who, a while back, were actually suggesting that it might be okay to let the beleaguered auto industry fend for itself, to leave Detroit to its fate to see how blithely willing much of America would be to point the gun straight at their own heads and pull the trigger.

Detroit isn’t just a national treasure. It IS America. And wherever you may live, you wouldn’t be there—and wouldn’t be who you are in the same way—without Detroit.

But there was no turning away. It’s there—everywhere you look, right in your face, taking up skyline, dead center: the things that were left after Everything Went Terribly Wrong. These aren’t just empty buildings—they’re monuments. And we shot them, illuminated them like monuments, with, I hope, the same respect as the Parthenon, the Coliseum, the remains of a magnificent—if ancient—civilization.

As much as many of our Detroit fans might have wanted this show to be about what’s going right in their city, neither is it particularly about what went wrong.

We know what went wrong.

The fall of the automobile industry, the shrinkage of population, flight of the middle class, drugs… and some of the most spectacularly, unapologetically rapacious, incompetent and corrupt leadership imaginable.

But I love Detroit. I think it’s beautiful. I think it’s one of the most beautiful cities in America—still. The same incompetence and neglect that led to its current state of affairs has, at least, left us with a cityscape that even now, taunts us with the memories of our once outsized dreams. Unlike most other cities who ran into trouble when steel or textiles or industry left town, Detroit didn’t (or couldn’t ) go on the usual idiot building spree, tearing down old buildings and paving over city center as “pedestrian malls”, ruining the city’s character and stripping its center in favor of the “shopping districts”, convention centers and faux “ye Olde Towne” hubs that so many places imagined would revive their fortunes and instead left their city centers empty, characterless and without heart—looking like everyplace else.

I’ll say it again. And again.

A few years ago, for another series, we filmed a show called “The Rust Belt” but which we jokingly referred to as “The Fucked Up Cities Show. We spent time in Buffalo, Baltimore and Detroit. When the show aired, the responses from Baltimore and Buffalo were mostly outrage:

“We’re WAY more fucked up than those punks,” many told me, with the straight on, confrontational, slightly injured pride that makes Detroiters so..well…awesome. “What are THEY whining about?”

Consensus seemed to be that Baltimore and Buffalo didn’t deserve to be on the same hour of television as their beloved— if deeply afflicted city—because their problems weren’t nearly as massive—and the strength, toughness and sense of humor required to stay loyal to Detroit was of another level entirely.

Looking back, if I were to compare Detroit’s mentality to any other city, I’d look to New Orleans. Both city’s hardcore, born and bred “ain’t never leaving” home teams refuse to even consider living anywhere else—no matter what happens. It takes a special breed.

So, this show is not about what went wrong. Or how bad things are. It’s about improvisers. About what it takes to dig in and stay. I hope, that even among ruins, audiences will see what I see: an extraordinarily beautiful city—unlike any other in America—still. It’s where so many of our uniquely American hopes and dreams were forged—the things that make us who we are: the automobile, the highway—the dream of mobility— for ALL Americans. Credit. Music. It’s where the American Dream was created. And it’s STILL the American Dream—if a different one that we are, all of us, together, sooner or later, going to have to figure out.

Detroit is shrinking.
And changing.
The artists and innovators, activists, and artisans who are coming in will no doubt, do much to transform the city—mostly in very positive ways.

But who will live in the Detroit of 25 years in the future?
It will still be beautiful. That’s for sure.
It will certainly be smaller.

But will all the tough bastards who stuck it out for so long—against ridiculous odds—who fought and continue to fight for their neighborhoods and their homes—will they still be there?

Those who watch this show, smugly thinking, “that could never happen to my city” are dreaming. Detroit’s problems are America’s problems.

Empty lots and burned out buildings are bad. But are cupcake shops, galleries and artisanal baristas necessarily better?
Maybe, probably, but maybe not.
And we better ask ourselves if that’s what we want.

Oh. And before I forget. Every time I visit Detroit, somebody asks me if I’ve had a good Coney yet.

Apparently, I never had a great one.

I finally got one.