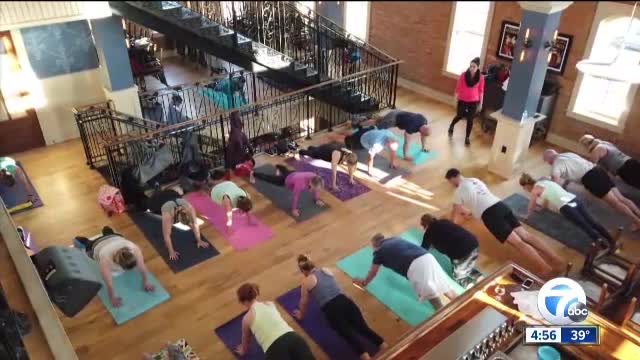 If you’ve ever been intimidated by the idea of trying a yoga class, there’s likely a class for you. At Brewery Becker, in downtown Brighton, you’ll find 20-30 people just about every Tuesday night — you read that right, yoga in a brewery. BRIGHTON, Mich. (WXYZ) — If you’ve ever been intimidated by the idea of trying a yoga class, there’s likely a class for you.

At Brewery Becker, in downtown Brighton, you’ll find 20-30 people just about every Tuesday night — you read that right, yoga in a brewery.

“Come as you are, not as you think you should be,” said Ashley Knuth, the regular instructor who walks people through one-hour of poses at 6 p.m. every Tuesday. “Channel your inner 6-year-old.”

According to Knuth, all you need is a yoga mat and $10. Extra if you’re planning on grabbing a beer, which can be drank mid-class or after depending on who feels like sticking around. If you think yoga is built on balance and beer isn’t, well, that’s true — but Knuth said it takes the stress out of the class. They have hard-core yoga enthusiasts and folks who prefer to drink and flop on a mat.

“Being in a brewery takes the intimidation out of it,” she said.

This was meant to be a fad — some didn’t think this would catch on at Brewery Becker. In fact, it was originally meant to be a short-term fundraiser that the Knuth Family Foundation would use to fund a female athletic scholarship. It’s become such a fan favorite that they’ve continued for several years. They’ve donated money to a variety of groups — including schools.

They’re not the only one offering beer yoga classes. We’ve seen pop-up classes at the Eastern Market Brewing Company in Detroit, Arbor Hills Brewing Company in Ypsilanti and at Ascension Brewing in Novi. Brewery Becker, however, has a weekly class that seems to never stop picking up steam.

Knuth said they update their yoga class schedules on the Brewery Becker Facebook page in case there are any last minute changes. You can find the page, here.