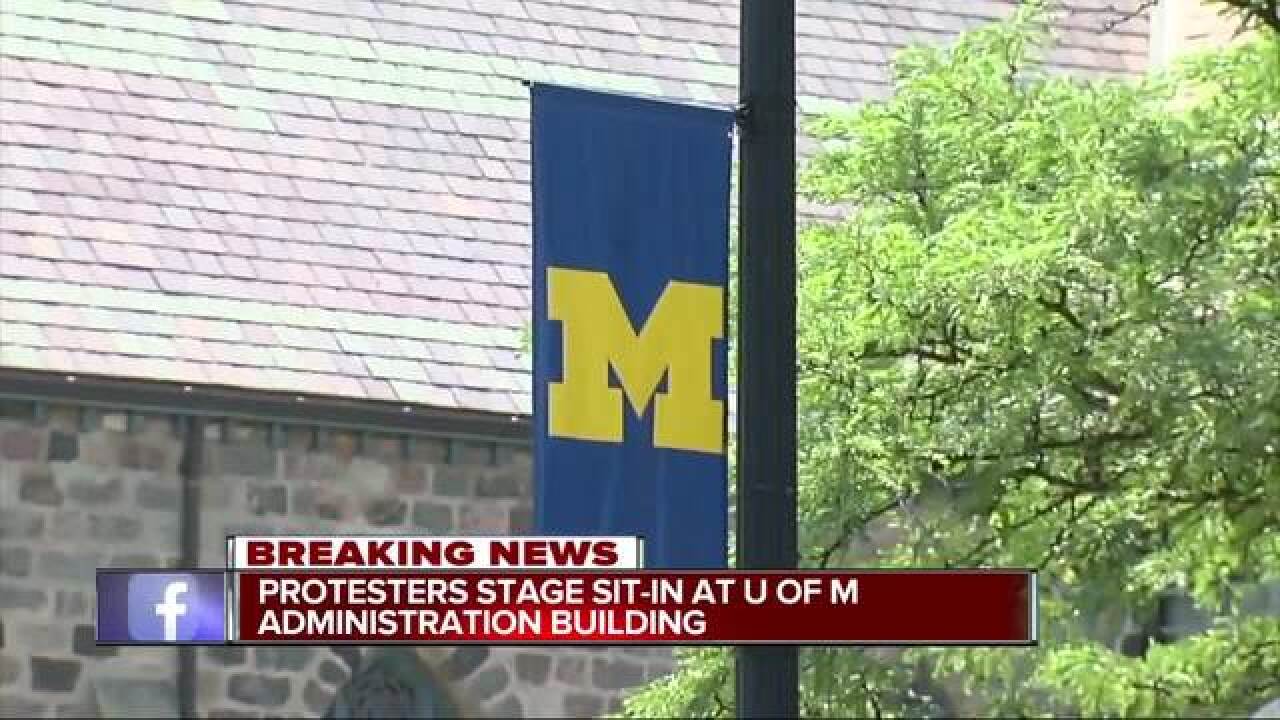 Members of the Lecturers' Employee Organization at the University of Michigan occupied a floor of the Fleming Administration Building on the Ann Arbor campus on Friday.

The organization is the union of almost 1,700 non-tenure track faculty at University of Michigan campuses in Ann Arbor, Dearborn and Flint.

The current contract between LEO and the University of Michigan expires Friday.

We've been negotiating for six months.  We want a change in the way the UM Administration thinks about, and compensates, lecturers. Not a just an improvement, but a transformation. A new way of doing business.
For most of that time, the Administration has been negotiating with us according to the old way of doing business, offering marginal increases to minimums so low that Lecturers cannot meet what the United Way calls a “basic needs budget” for a family with one or two children.

We had to use the threat of a strike to make real progress. The Administration responded by finally putting increased minimums and equity adjustments for past underpayment on the table. So we called off the strike.

These improvements still fell well short of what is needed to get the full-time rate for all Lecturers across the basic needs budget threshold. But the Administration says there is little additional money for Ann Arbor Lecturers and none at all for our Flint and Dearborn colleagues. Our research has demonstrated that UM has the money to pay us what we are worth, but there are other ways our Administration would rather spend that money. It expects us to settle soon without more than marginal improvements to its current offer. But that expectation is neither realistic nor fair, and it is not going to happen.

The role that Lecturers play in our university has changed profoundly over the last 20 years. Prior to that, Lecturers were professionals (e.g., lawyers) with a full-time non-academic job who shared their non-academic expertise with UM students by teaching a course or two each year; or newly-minted PhDs who got a little extra teaching experience before securing a tenure-track job; or the spouses of sought-after tenure-track faculty. There were not many such lecturers at UM and they did not teach a very large share of our courses. The professionals typically made a fine income in their primary job. The newly-minted PhDs were expected to get good paying tenure-track jobs in the near future. Low pay for spousal hires raised questions of gender equity, given that most of those spouses were women. But their low pay could be rationalized on the assumption that the combined income of two UM faculty, one on the tenure-track, was probably quite good.

By the mid-1990s, these kinds of Lecturers were the minority. Most Lecturers were hired from the pool who would have become full-time tenured faculty in the days when most faculty jobs were still tenure-track.  That system is gone. Today, two thirds of U.S. higher education faculty are nontenure-track. The number is not that high at UM, but the trend is in the same direction. Already Lecturers teach over half the classes in Flint and Dearborn; in Ann Arbor, we account for almost 40% of undergraduate classes, and almost 50% of first and second year classes.
In this new world, some of us became Lecturers because we love teaching and interacting with students, and prefer this focus to applying for grants, running a lab, and publishing in leading journals, as our tenure-track colleagues must to be deemed successful. Other Lecturers would have taken a tenure-track job if one were available, but (as noted) there are now far fewer of those as a share of all faculty jobs. Either way, our talents, experience, and expertise have developed differently from those of our tenure-track colleagues. We have different, yet complimentary and equally challenging jobs, and we both make vital contributions to our university.

We want the Administration to recognize that being a Lecturer can and ought to be a financially viable career option. We are talented and dedicated teachers, scholars, artists, and scientists. We are important members of the SE Michigan communities where we live, as well as the UM campus community. It's high time the Administration started treating us as such!

We want the Administration to commit to creating Lecturer jobs that meet or exceed the United Way’s basic needs budget standard. It found the money to make its Go Blue Promise; it should now make a Stay Blue Commitment – a promise to Lecturers that if they work hard and meet the high standards of the University, the value of our contributions will be acknowledged and we will be paid enough to make a real career and raise a family here.