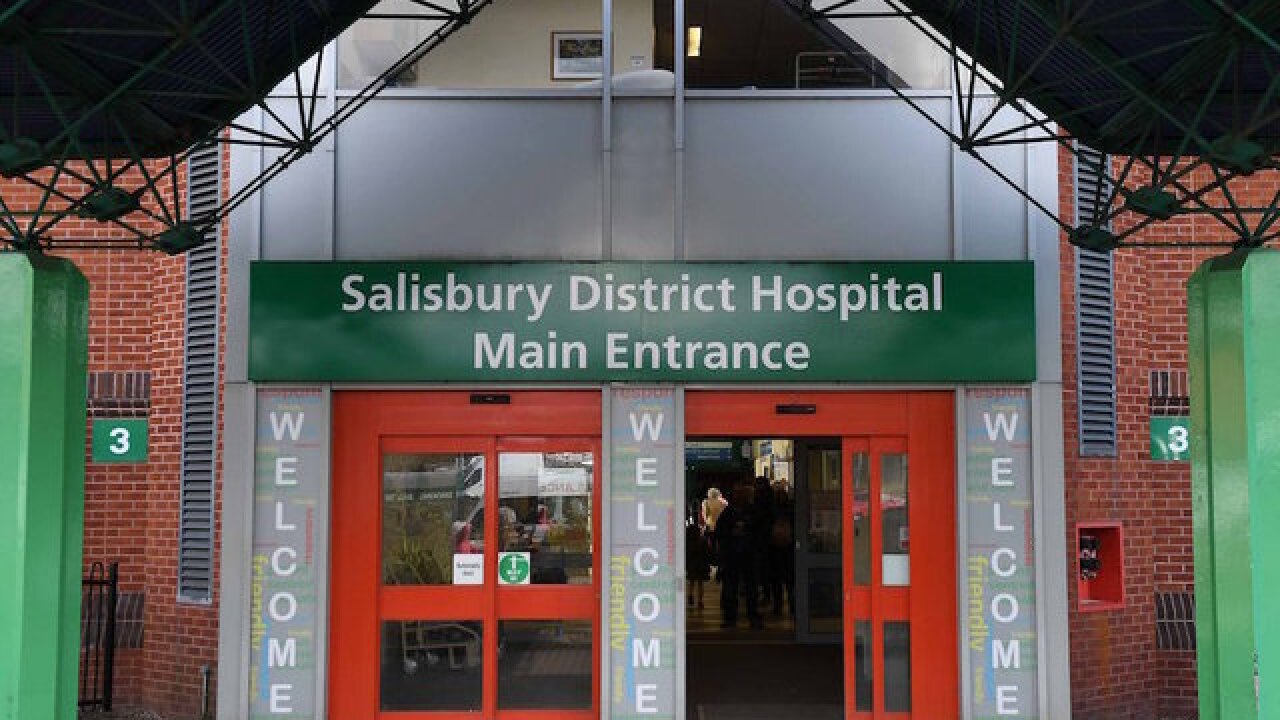 © 2018 Cable News Network, Inc.
Chris J. Ratcliffe/Getty Images
<p>British counter-terrorism officers have joined the investigation into how two critically ill people came to be exposed to an "unknown substance" in a town in southern England.</p>

The pair remain in critical condition in Salisbury District Hospital, the same hospital where former double agent Sergei Skripal and his daughter were treated after they were exposed to Novichok, a military-grade nerve agent. The UK government suspects the Skripals were victims of a Russian attack.

The UK's National Counter Terrorism Policing Network is leading the investigation. Officers are investigating the possibility of a connection between the two attacks, said Neil Basu, Assistant Commissioner for Counter Terrorism at London Metropolitan Police. But no evidence so far suggests the couple was specifically targeted, he said.

"I don't have any intelligence or evidence that they were targeted in any way. There is nothing in their background to suggest that at all," Basu said.

"We are not in a position to say whether the nerve agent was from the same batch that the Skripals were exposed to. The possibility that these two investigations might be linked is clearly a line of inquiry for us."

What we know about the victims

Paramedics were called to an address on Muggleton Road in Amesbury the morning of June 30 after a woman collapsed at the property, Wiltshire Police Deputy Chief Constable Paul Mills told reporters earlier Wednesday. They were called back later the same day after reports that a man became ill in the same location, he said.

British news agencies identified the two people as Charlie Rowley, 45, and Dawn Sturgess, 44. Sam Hobson, a friend of the pair, confirmed their names in an interview with Agence France-Presse. The two victims are British nationals local to the area, according to police in Wiltshire, the county in which Amesbury is located.

Wiltshire Police said they were initially believed to have fallen ill after using crack cocaine or heroin from a contaminated batch. On Monday, due to concerns over their symptoms, samples from both patients were sent to a laboratory for analysis.

"Following the detailed analysis of these samples, we can confirm that the man and woman have been exposed to the nerve agent Novichok, which has been identified as the same nerve agent that contaminated both Yulia and Sergei Skripal," Basu said.

"I do want to reassure the public, however, that there is no evidence that either the man or woman recently visited any of the sites that were decontaminated following the attempted murders of Sergei and Yulia Skripal," he said.

Authorities have cordoned off several sites in Amesbury and Salisbury that the couple is believed to have visited before they fell ill, Basu said. He warned of an increased police presence in the area, which will include officers wearing protective equipment, similar to the activity earlier this year in the Skripal investigation.

Wiltshire Police Chief Constable Kier Pritchard called the increased police presence a "proportionate response to an investigation of this nature and scale."

"I fully appreciate the effect the cordons will have on local people and businesses," he said in a statement. "Please let me reassure you that my officers and staff, partner agencies and our colleagues at the Counter Terrorism Policing network will do all we can to progress this investigation and help return the communities of Amesbury and Salisbury back to normality."

Affected sites include Amesbury Baptist Church, which had police standing guard at the entrance on Tuesday. Church secretary Ray Collins told CNN he believed the victims attended a family fun day at the church on Saturday, though he did not know who the pair were. A Boots pharmacy in Amesbury was cordoned off, along with the Queen Elizabeth Gardens, the John Baker House in Salisbury, a supported living facility, and the Muggleton Road property in Amesbury, according to Wilshire Police.

As a "highly precautionary measure," Public Health England South West advised anyone who had visited those sites from 10 p.m. on June 29th to 6:30 p.m. on June 30 to do the following:

- Wash the clothing they were wearing in an ordinary washing machine just as they would any other items.

- Wipe personal items such as phones, handbags and other electronic items with cleansing or baby wipes and dispose of the wipes in an ordinary domestic waste disposal.

- Hand wash with warm water and detergent any items that cannot go in the washing machine or be cleaned with wipes, such as jewelery and accessories, and rinse with clean cold water.

Salisbury District Hospital is open as usual and is advising people still to attend routine appointments unless they are contacted to state otherwise.

"Our current advice, based on the small number of casualties affected, is that there is no significant health risk to the wider public. We will keep this assessment under constant review as further information becomes known," said Mike Wade, Deputy Director of Health Protection for PHE South West.

Authorities believe that Sergei and Yulia Skripal first came into contact with Novichok at Sergei's home. They were later found slumped over on a bench at an outdoor shopping complex in Salisbury.

The incident in Salisbury sparked a diplomatic dispute between the UK and Russia after British investigators blamed Moscow for the attack.

Russia has denied the allegations, but more than 20 other countries kicked Russian diplomats out of their countries in a show of support for the UK.

The two have since been discharged from the hospital.