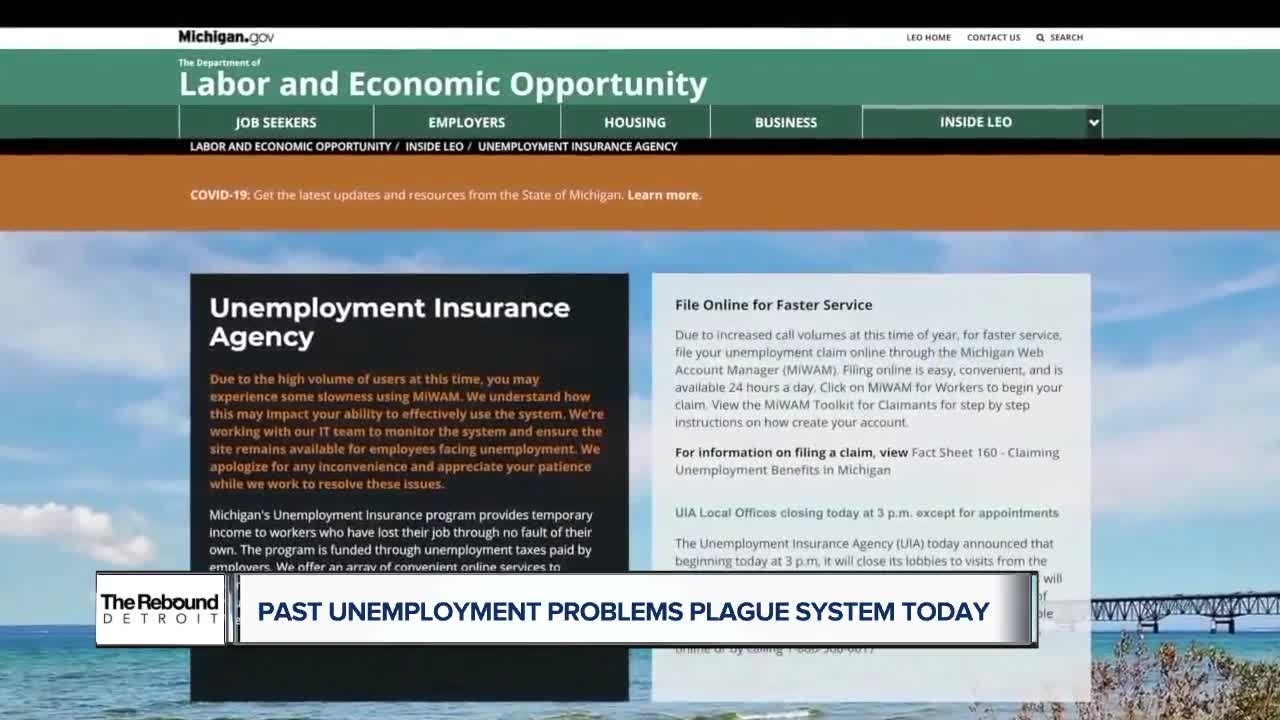 (WXYZ) — Carolyn Beachamp-Serour has been a nurse and healthcare manager for 38 years. She never thought she would get laid off during a healthcare crisis.

And until Carolyn got called into her manager’s office in April, she never imagined the COVID-19 pandemic would also become an economic crisis for her family.

"She said, 'I’m really sorry but we’re going to have to lay you off.' And I was just sitting there in disbelief," Beauchamp-Serour said, describing the day last month when her supervisor made her aware of the cuts.

The Oakland County mother knew then that she would have to join the other million-plus Michiganders who have applied for unemployment. But once she went online, she learned that the state’s system was a mess.

"Big box pops up [on the screen] saying your unemployment’s been locked," Beauchamp-Serour said, eventually realizing she fell into a frustrating category in the unemployment system: workers who previously got ensnared in a fraud detection fiasco.

"And then it dawns on me that four years ago, somebody used my information and applied for unemployment, so this must be why I’m locked out of the system," she said.

In 2013, after laying off more than 400 workers, the Michigan Unemployment Insurance Agency (UIA) debuted MiDAS, an automated system that was supposed to increase efficiency and responsiveness. In reality, it caused a number of headaches.

"Essentially anybody with data that didn’t match in the system, would be accused of fraud and found guilty of fraud," said Ann Arbor attorney David Blanchard, who is one of several lawyers who have filed lawsuits against the UIA for the destruction caused by MiDAS.

"It turns out tens of thousands of people, 50,000 or more, in fact, were flagged in this system and wrongly accused of fraud," he continued.

Between October 2013 and August 2015, 42,000 claimants were flagged for fraud — a transgression that could come with a 400% fine, and the garnishment of state and federal taxes as well as new wages. A state analysis later found that 93% of sampled computer-generated fraud determinations were wrong.

Efforts to rectify the fiasco began in 2015 — following the filing of a federal and class-action lawsuit. That fall, the state revised its policy and decided that fraud determinations had to be reviewed by people, not a computer. They've also been trying to reimburse those were wrongly accused — in March 2019, the state reported that all but approximately 500 people had been reimbursed.

But Blanchard said the current influx of claims from the pandemic is highlighting serious gaps in the system – both for those wrongly accused of fraud and victims of identity theft like Beauchamp-Serour.

"This flood is going to expose all kinds of other underlying problems with the system, whether an issue of old claims that were wrongly flagged, weren’t kind of cleaned up in the computerized system, or it’s problems with capacity. I think we’re going to see all of those coming out," Blanchard said.

After more than a week of trying, Beauchamp-Serour was able to apply, but only after calling 65 times in one day and repeated emails.

"They just keep hanging up on you, you don’t even get to talk to a person. I just felt like I was never going to get through and have somebody help me," Beauchamp-Serour said.

Since the pandemic started, the UIA increased their call center staffing from 130 to 650, including temp and re-deployed workers. They are all trying to help with claims. But the flood of claims is tough to manage, even with the increase.

That’s something that worries Jennifer Lord, another attorney who has taken on MiDAS.

"With the inability to speak with humans, the system is going to become more reliant on technology and that was exactly the problem that we had going back to 2013 when human oversight was withdrawn," said Lord.

State officials recommend that if your account gets locked, make sure you closely review the Frequently Asked Questions section on their website.

"Unfortunately, accounts can be locked for security reasons, with the most common being an identity theft attempt. We established new technology tools within the online system that connects customers directly to a dedicated team of more than 100 individuals who can resolve locked account issues. Customers can access these tools directly when they attempt to login," said Jason Moon, communications director for the Michigan Department of Labor and Economic Opportunity.

Moon also reiterated that all workers will ultimately receive their benefits, even if it takes longer to apply.

"We understand the frustration that a number of Michiganders have experienced with the unemployment system as we continue to process claims during this historic demand. We continue to add customer facing staff and resources and are working around the clock to continue to provide this emergency financial assistance to our workers that deserve it most. We assure all eligible workers who file for unemployment that they will receive every dollar they are entitled to," Moon said.