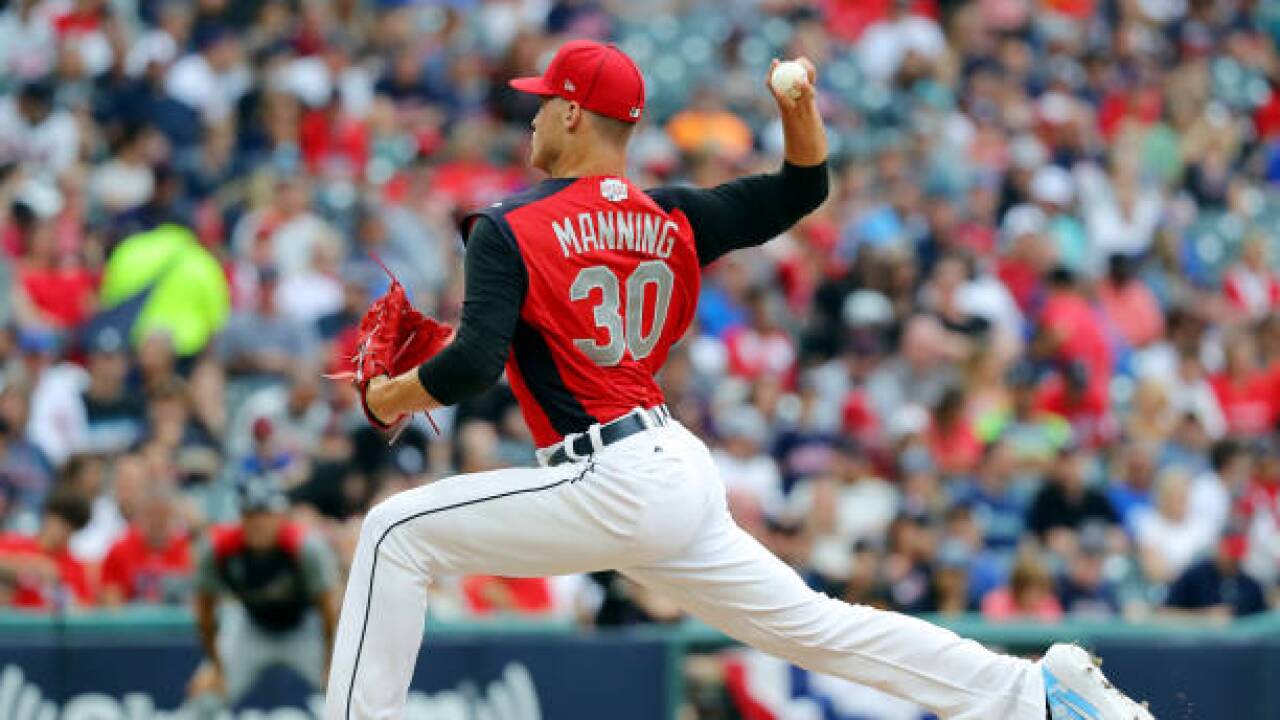 Texas catching prospect Sam Huff's two-run homer in the seventh inning rallied the American League to a 2-2 tie with the National League on Sunday -- and provided the first glimpse of an All-Star tiebreaker -- in a Futures Game that promised to be different and delivered.

This year's format was changed with the game shortened from nine to seven innings, and Huff's homer off Colorado's Ben Bowden forced the game into the eighth -- this time, extras -- and earned him MVP honors.

Both teams began their at-bats in the eighth with a runner at second, the same tiebreaking system already being used in the minor leagues. But after neither could push a run across, the 21st game featuring baseball's up-and-coming stars ended with a thud.

The same tiebreaker could come into play in Tuesday's All-Star Game. Major League Baseball plans to implement it after the past two games went 10 innings.

"It was definitely unique, but in a situation like this, it was necessary," said Nationals shortstop Carter Kieboom. "Guys need their (All-Star) break, so you can't play forever and you only have so many pitchers here.

"It definitely speeds up the game in the minor leagues. I can't really predict the future. I don't know if the game of Major League Baseball will allow it because of its history, and it would be a drastic change. Maybe teams would try harder to score in the ninth inning if it happened."

Beyond the other adjustments, the biggest difference in this year's game was a lack of scoring. Last year, the U.S. won 10-6 as Reds prospect Taylor Trammell homered and tripled.

Down to their final two outs, and blanked over six innings, the AL tied it in the seventh on Huff's shot onto the pedestrian patio in left.

The 21-year-old connected on a 1-0 pitch from Bowden, who is for 20 for 20 in save opportunities in Double-A and Triple-A this season.

After rounding the bases, Huff was greeted at the dugout by the entire AL squad, which spilled out along with Hall of Fame slugger Jim Thome, who managed the youngsters.

"I didn't think I was going to look at them and smile, but I had a little smirk on my face," Huff said. "I had to keep it serious when I was rounding third, but when I touched home I started to smile."

Trammell hit an RBI single -- and probably should have been credited for stealing home -- and was likely in line to win his second straight MVP honors before the AL rallied.

Held without a hit for three innings, the NL finally broke through in the fourth.

Trammell dropped a bloop RBI single off Matt Manning, a Detroit prospect, and Dylan Carlson had a two-out, run-scoring hit off Kris Bubic, a lefty in Kansas City's system.

A former high school football star, Trammell nearly made it 3-0 with a straight steal of home. Bubic didn't see him barreling down the line until the last moment, but threw in time to nip Trammel, who dived head first and was called out by umpire Jose Navas.

TV replays appeared to show Trammell slipped his hand under catcher Jake Rogers' tag, and under normal circumstances the play would have likely been reviewed and overturned.

"I can say I'm safe all day and he missed the call, but what matters is what's on the scoresheet," Trammell said. "It said I was caught stealing."

For many of the minor leaguers, the Futures Game provided their first experience at being inside a major league clubhouse. Some seemed awed at sharing the same cubicles and spaces as players they've grown up admiring.

"I think you're always going to be a little bit nervous for something like this," said Indians infield prospect Nolan Jones, hoping to one day work his way up from the Class A Lynchburg Hillcats to Cleveland. "I mean, this is what you dream about."

He threw four pitches over 101 mph during a perfect fifth, topping out at 101.7 against Dodgers' Double-A shortstop Gavin Lux.

Pirates' Triple-A first baseman Will Craig was hit by pitches in both plate appearances. He did not react after being plunked by Mariners right-hander Justin Dunn in the second, but he angrily flung his bat after being struck in the fourth by Manning.

Baltimore pitching prospect DL Hall was hit in the lower left leg by Miguel Amaya's shattered bat in the third inning. Hall couldn't avoid being struck, but after being checked by a trainer, the right-hander stayed in and finished the inning.

"Of course they were accidental, but the second one got me on the left hand, so it stung a little bit," Craig said. "It's OK. I'm a little bit sore, but everything is fine."

Indians prospect Daniel Johnson looked like he was on the way to the gym for a workout, choosing to display his muscular arms by not wearing a shirt under his sleeveless jersey.

Tampa Bay teenage sensation Wander Franco went 1 for 2 and was caught stealing. The 18-year-old shortstop was the game's youngest player.

Yankees right-hander Deivi Garcia started with a scoreless inning shortly after New York announced he would be promoted from Double-A to Triple-A. Garcia pitched in a combined no-hitter and had a 15-strikeout game in the past month.

Former Indians slugger Travis Hafner cleared the portable outfield fence -- and the permanent one -- with a homer during the All-Star Celebrity Softball Game.

Cavaliers forward J.R. Smith stripped off his jersey for his first at-bat in the softball game, triggering memories of his bare-bodied appearance during the NBA championship parade in 2016.