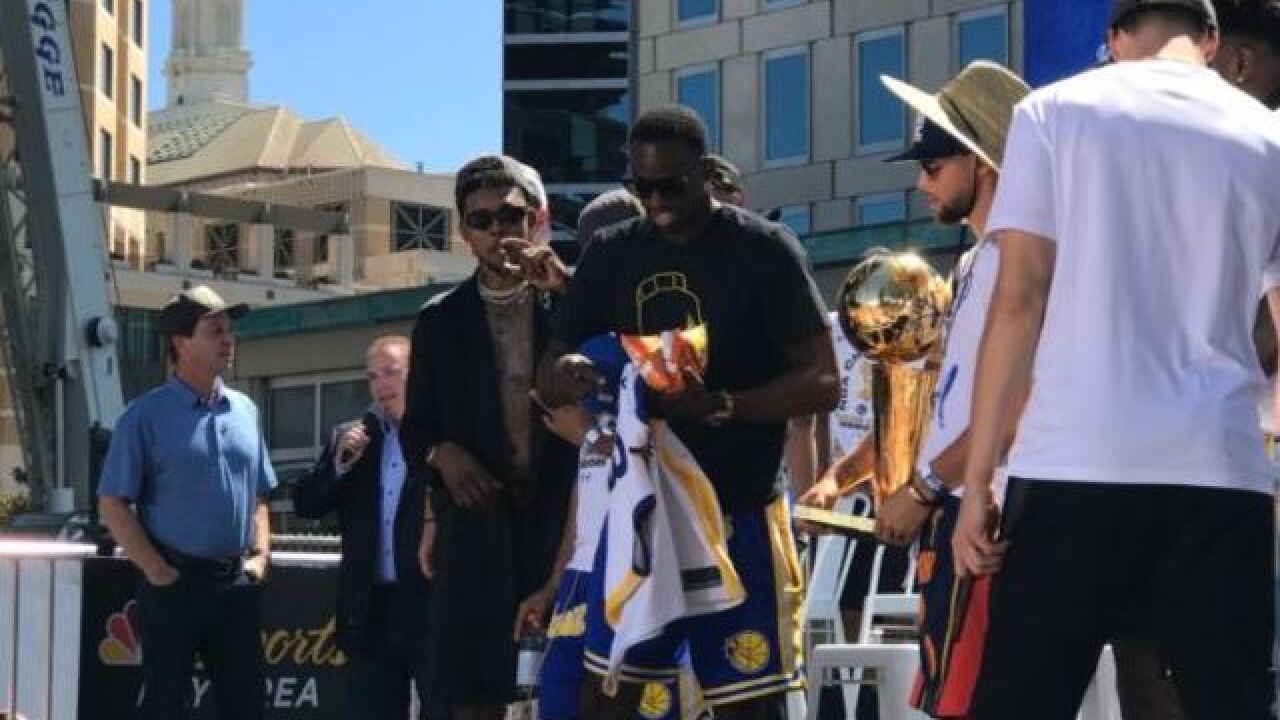 OAKLAND, Calif. (AP) — For the second straight year, throngs of Golden State Warriors fans turned out for a victory parade to celebrate a team some are calling an NBA dynasty.

Hundreds of thousands of fans in gold and blue and holding signs that read “Dynasty” and “Back to Back Champions” waved from behind barriers set up along the route in downtown Oakland, California, as the Warriors rode by in an open, double-decker bus.

Stephen Curry, NBA Finals MVP Kevin Durant and the rest of the Warriors, who won their third title in four years last week, took turns raising the Larry O’Brien Trophy for the roaring crowd, which officials said could reach up to 1 million fans.

Officials had promised an “interactive” parade with some fans able to ask the players questions and giant TV screens for the crowd to see them and hear their answers as the moved along the route. But there were no screens and when Klay Thompson used a megaphone to say hello, his greeting was drowned out by the cheering crowd.

Curry was able to connect in a different way when he opened a bottle of champagne, shook it and sprayed the crowd with it. He briefly got off the bus and walked up to fans, throwing T-shirts to them and then holding the trophy up as dozens of cameras surrounded him.

Curry wore a large sun hat and under it a “RUN TMC” baseball cap in honor of Tim Hardaway, Mitch Richmond and Chris Mullin, the namesakes for the Don Nelson-coached Warriors teams during the 1989-90 and 1990-91 seasons.

“We never really imagined that we would be having one parade, let alone two and now three,” Curry said during a short live interview before the parade started. “But this is for you guys! We are going to try and get greedy and go get some more.”

Eli Angel, who celebrated his 6th birthday at the parade, said he would like to ask Curry how he got “so good.”

The NBA champions have gone back-to-back, beating LeBron James and the Cleveland Cavaliers 108-85 last week to finish off a four-game sweep of the NBA Finals in the fourth consecutive meeting between these clubs.

“We all know it’s not going to happen forever, so for now we’re just going to enjoy it,” she said.

Oakland resident Jasmine Culp, 36, painted her lips blue and dressed in a sparkling golden sequined dress, sash, and blue-gold feather accessories to attend the parade with her three children, Jonavon, Jewel, and Cypher.

“It’s our new family tradition,” she said. “We love to kick off the summer here and we love to dress up.”

Culp acknowledges it could be the family’s last parade in Oakland, since the Warriors plan to move to San Francisco next year.

“It’s sad to see a big part of our city move away,” she said. “Not going to want to travel over the bridge to see them, but we will.”

Adriana Carnecer of San Francisco said she is a lifelong Warriors fan and is excited the team will be closer to home.

On the Warriors being dubbed a dynasty, the 15-year-old said “it’s the start of something that’s going to be greater than it already is.”