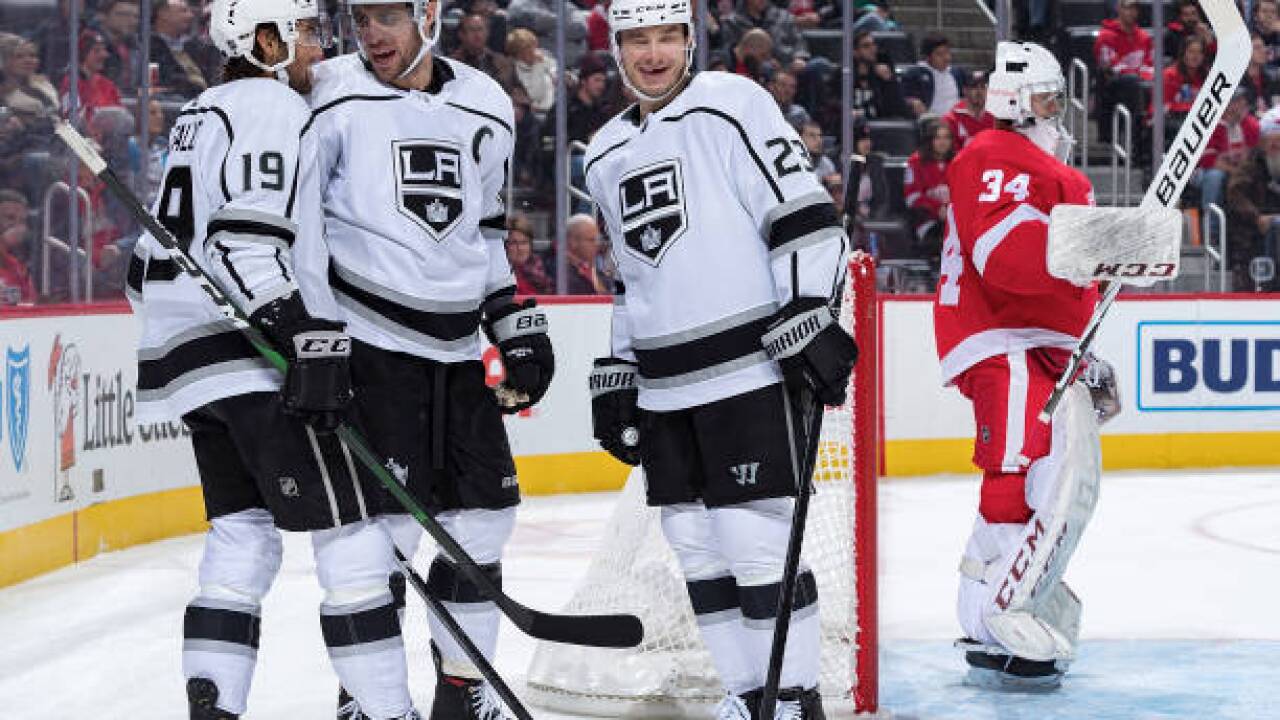 Copyright 2019 by Getty Images
Dave Reginek/NHLI via Getty Images
DETROIT, MI - DECEMBER 15: Anze Kopitar #11 of the Los Angeles Kings celebrates his second goal with teammates Alex Iafallo #19 and Dustin Brown #23 behind the net of goaltender Eric Comrie #34 of the Detroit Red Wings during the second period of an NHL game at Little Caesars Arena on December 15, 2019 in Detroit, Michigan. (Photo by Dave Reginek/NHLI via Getty Images)

Jeff Carter and Tyler Toffoli also scored for Los Angeles, which has won three of its last four (3-0-1). Alex Iafallo had two assists and Jack Campbell, who is from Port Huron, Mich., stopped 22 shots.

Defenseman Madison Bowey had a goal and an assist, and Filip Zadina also scored for Detroit. Eric Comrie finished with 28 saves.

Carter gave the Kings a 1-0 lead with 7:45 left in the first period when he put in his own rebound from just below the left circle, after intercepting a pass by Red Wings defenseman Filip Hronek. It was Carter’s 10th goal.

Kopitar scored twice in the second period to make it 3-0. His attempted pass from the top of the left circle went in off the skate of Detroit defenseman Jonathan Ericsson 40 seconds into the period and Kopitar cashed in on a rebound with 8:46 left in the middle period forhis 13th.

Toffoli scored 6:40 into the third period, getting his ninth, for a 4-0 lead. Toffoli has seven points (three goals and four assists) in his last four games.

Zadina thwarted Campbell’s shutout attempt midway through the final period. It was his second goal of the season and second in three games. Bowey added his second goal with 2:23 left.

NOTE: Kopitar’s goals gives him 919 points to pass Wayne Gretzky and move into fourth place on Los Angeles’ franchise list. ... It was Zadina’s 10th game of the season. That means his three-year, entry-level contract begins this season. Zadina was the sixth overall pick in the 2018 NHL Draft. ... Former Red Wings defenseman, Hall of Fame member and seven-time Norris Trophy winner Nicklas Lidstrom was in attendance on Sunday night. ... Both teams played on the road Saturday night. Los Angeles lost 5-4 in a shootout to the Pittsburgh Penguins and Detroit defeated the Montreal Canadiens 2-1.

Kings: At Boston on Tuesday night.