Arizona State slips past No. 18 Michigan State on late TD 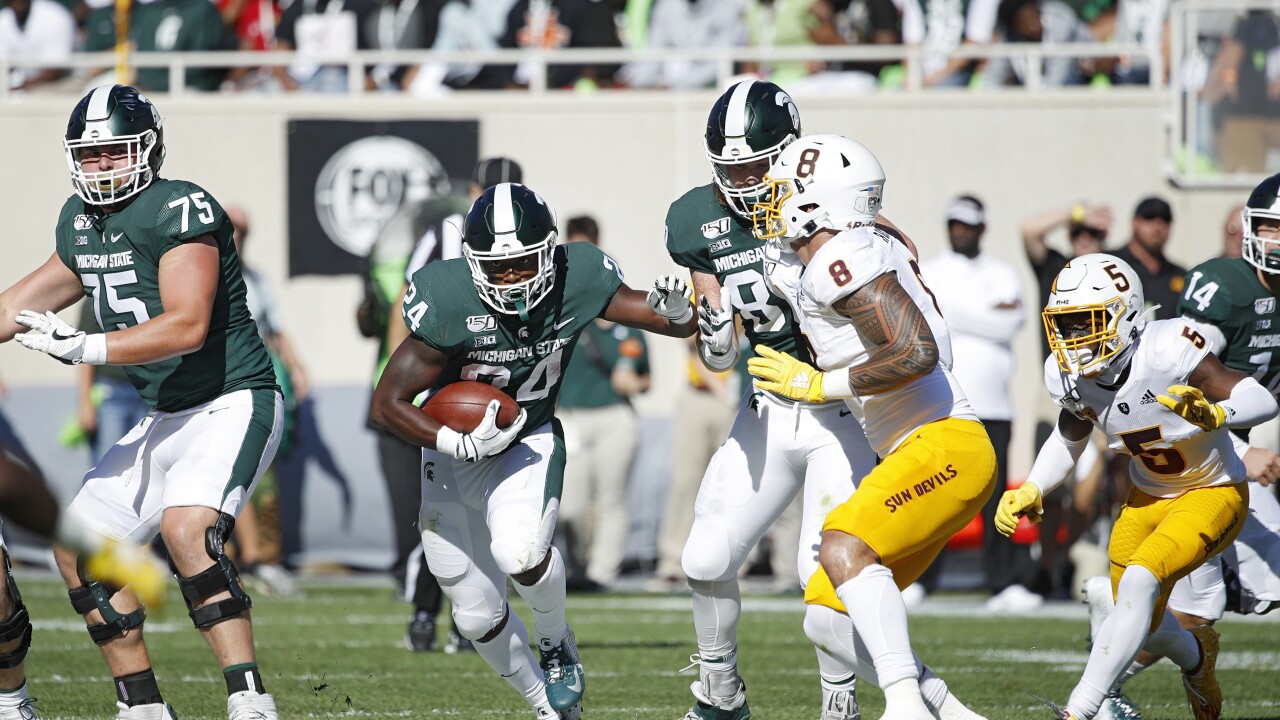 EAST LANSING, Mich. (AP) -- Eno Benjamin reached the ball to the goal line for a 1-yard touchdown run with 50 seconds remaining, and Arizona State beat No. 18 Michigan State 10-7 on Saturday after the Spartans had a tying field goal negated for having too many men on the field.

Matt Coghlin's 42-yard kick appeared to have tied it with 6 seconds remaining, but a replay showed too many men on the field for Michigan State, which had rushed the field goal team on in a disorganized fashion.

Coghlin had to try again from farther back, and he hooked the kick left for his third miss of the day.

Michigan State coach Mark Dantonio missed a chance to take over sole possession of first place on the school's career victories list. He remains tied with Duffy Daugherty at 109.

Arizona State (3-0) drove 75 yards in 11 plays at the end, against a Michigan State defense that had been stifling all day. Quarterback Jayden Daniels ran 15 yards for a first down on fourth-and-13 from the Michigan State 28, and Benjamin's touchdown put the Sun Devils ahead. That play also was reviewed, and Benjamin had just barely extended the ball far enough to score.

"We're still young. We've got a lot of improving to do," Sun Devils coach Herm Edwards said. "You're not going to win many games 10-7."

The Spartans drove back to the Arizona State 24 and, after spiking the ball to stop the clock with 11 seconds left, they appeared to have enough time for one more throw. But with no timeouts remaining, Michigan State (2-1) seemed indecisive, and eventually the field goal team rushed on. The Spartans barely snapped the ball in time to beat the play clock, and although Coghlin's kick went through, there were too many players on the field.

"Initially, we were going to try to take a shot to the end zone," Dantonio said. "Then I said, `Hey listen, we need to kick it, because if we catch the ball the game's probably over-- if we catch the ball and we're not in the end zone, the game's probably over. Line up and kick it.' Our field goal kicker was a little late, sort of watching, so he runs out, the clock's ticking down. He still makes the field goal, but I'm not sure how -- we had injuries on the offensive line -- I think maybe one guy stayed in. I'm not sure."

Elijah Collins had a 9-yard touchdown run with 8:37 remaining for Michigan State, but the Spartans blew a fourth-quarter lead against Arizona State for a second straight year. The Sun Devils won 16-13 last season.

Arizona State has scored more than seven points in 137 consecutive games, the longest active streak in the FBS.

Coghlin was 40 of 48 on field goals for his career before Saturday. He missed from 47 yards in the second quarter, and Arizona State drove the other way for a 41-yard field goal by Cristian Zendejas. The Spartans appeared poised to tie the game late in the half, but Coghlin missed from 31 yards after a delay of game penalty had pushed that kick back.

Michigan State's first drive of the third quarter reached the Arizona State 34, but Connor Heyward was stopped on fourth-and-1.

Arizona State: The Sun Devils showed they could slug it out on the road with the physical Spartans, and although they didn't move the ball much, their freshman quarterback was impressive at the end.

Michigan State: Dantonio will have to wait for his milestone, and this game certainly wasn't his finest hour. Although the kicking game cost the Spartans dearly, the coaching staff has to take responsibility for how rushed Michigan State was at the end.

Michigan State will obviously drop, and it will be interesting to see how voters view Arizona State after the Sun Devils remained unbeaten with this tough road victory.