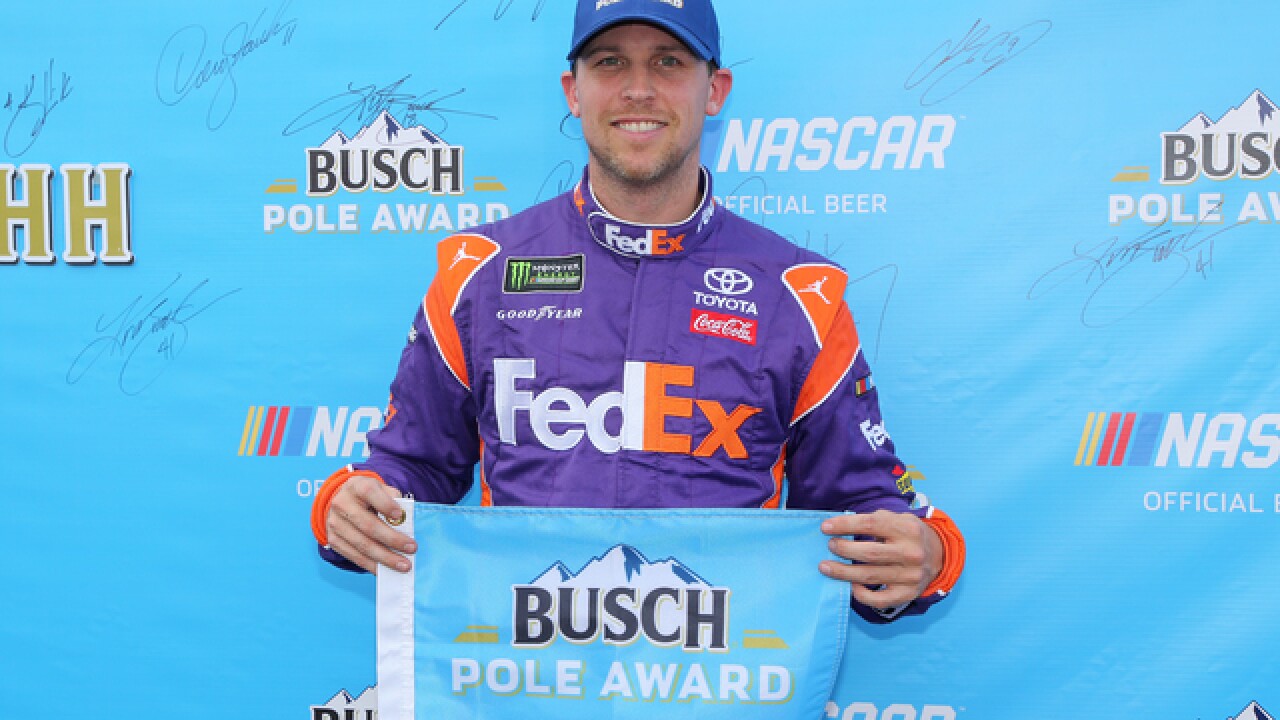 BROOKLYN, Mich. (AP) -- Denny Hamlin and Kyle Busch swept the front row in qualifying at Michigan International Speedway. Kevin Harvick, neck-and-neck with Busch all season, was right behind in third.

Hamlin went 202.794 mph in Friday's session to win a pole for the second consecutive week. The JGR veteran is winless this season, while teammate Busch has six victories and Erik Jones has one.

His No. 11 team has clearly hit on something these last two weeks and Hamlin, a two-time Michigan winner, was fastest in all three rounds of qualifying and Friday's first practice. But he's still in search of a win and wants to continue his streak of at least one victory a year every season since his 2006 rookie year.

"It is a very important streak; I think about it," said Hamlin, who thought the streak was over in 2013 when he broke his back and missed a month, then didn't win until the season finale.

"You look back at the really great drivers of NASCAR, and they had long streaks, 10 years and above, of winning in a row, and you want to keep that going for sure. It's important."

Busch made it an all-Toyota front row for Sunday's race with a lap at 202.731 mph. Harvick, in a Ford for Stewart-Haas Racing, went 202.100. Harvick and Busch are tied for most Cup Series victories, while Martin Truex Jr., the final member of the so-called "Big 3," has four wins this year. He qualified seventh in his Toyota for Furniture Row Racing.

Jones qualified fourth to give JGR three of its four drivers in the front two rows. Daniel Suarez, who like Hamlin is winless this season, did not record a qualifying speed because he scraped the outside retaining wall early in the first round.

Austin Dillon and Ryan Newman, in Chevrolets for Richard Childress Racing, were fifth and sixth. Penske teammates Ryan Blaney and Joey Logano rounded out the top 10 in a pair of Fords.

Kurt Busch's name jumped into the rumor bill in the middle of qualifying when Motorsport.com reported Busch would replace Jamie McMurray at Chip Ganassi Racing. After his 12th-place qualifying effort, Busch said he was talking to several teams and doesn't have a deal for 2019.

Ganassi said he doesn't have a deal Busch and his only recent communication with him was a bet on a baseball game. As for McMurray's future with the team -- McMurray has won the Daytona 500, Coca-Cola 600, Brickyard 400 and Rolex 24 Hours of Daytona driving for Ganassi -- the team owner said: "I want Jamie McMurray back on my team."

Clint Bowyer, winner of the first stop of this season at Michigan, qualified 16th for Stewart-Haas Racing.