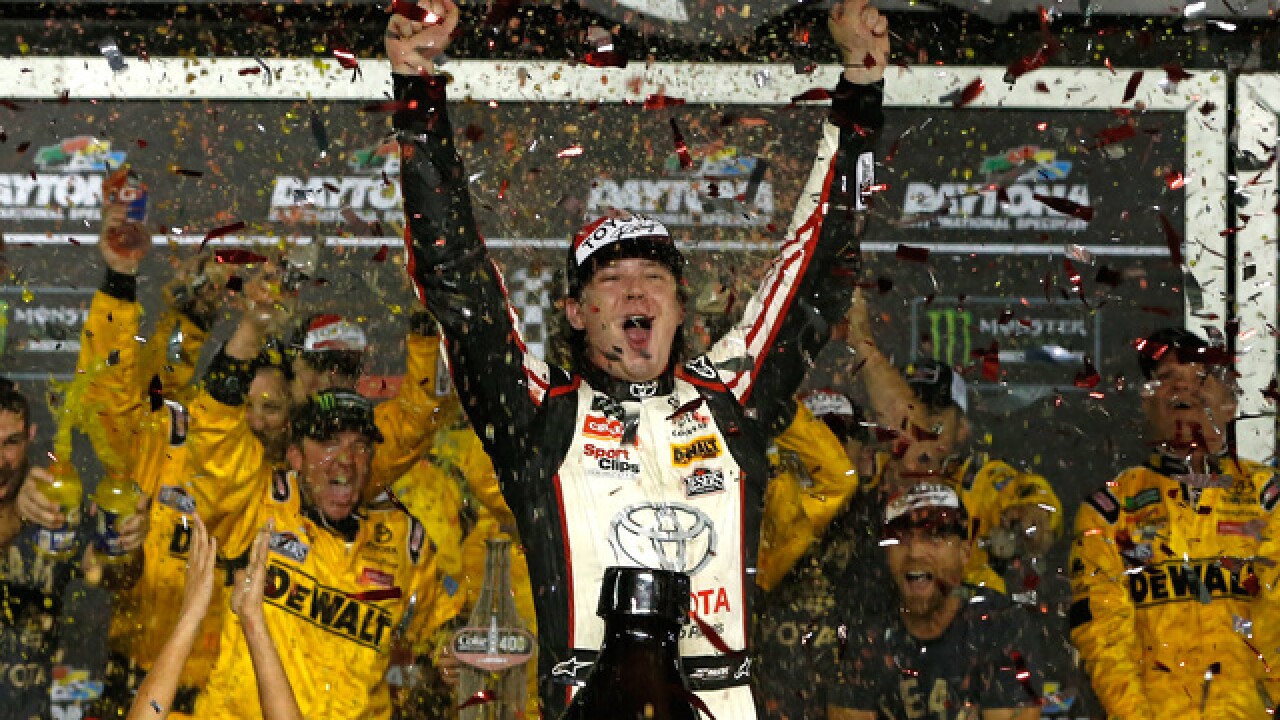 Jones was involved in one of the many wrecks Saturday night, but his No. 20 Toyota was still in good enough shape to get by Truex. Truex blamed himself for failing to see Jones' run coming in his rear-view mirror.

For Jones, a 22-year-old Michigan native driving in his first season for Joe Gibbs Racing, the breakthrough victory came in his 57th career start.

"Oh boy," he said. "How about that race boys and girls? I thought we were out of it and all of a sudden we're right back in it. My first Cup win. My first win at Daytona, My first superspeedway win. What an awesome day."

Last year's race winner, Ricky Stenhouse Jr., had the most memorable run of the night. He started two early accidents that wrecked more than half the field and was part of two more cautions late.

Stenhouse took out Kurt Busch, Kyle Busch, Brad Keselowski and others. Jones was one of the lucky ones who avoided major damage.

"Definitely happy to see those guys get their first win," said Truex, who had Jones as a teammate at Furniture Row Racing last year. "For them to get it here at a really big race was cool to see."

It also may have been a much-needed victory for NASCAR's so-called "Young Guns," the up-and-coming generation of drivers who had gotten most of the promotion and none of the previous wins in 2018.

International Speedway Corp. President John Saunders pinned some of NASCAR's woes on the failure of the new crop of drivers that have failed to replace a crop of retired stars of the sport.

Saunders said this week the sport needed the stable of young drivers to come along and "start to win and build their brands."

Ryan Blaney and Darrell Wallace Jr. fired back at Saunders, saying the 20-somethings were trying their best to win.

Truex took a jab at the critics, saying "now maybe ISC and those guys can be happier about those things."

CHEVY WOES CONTINUE
Chevrolet extended its winless streak to 18 races, its longest since a 31-race drought in 1981-82.

CEMENTED IN HISTORY
Austin Dillon celebrated his Daytona 500 victory by putting his signature, hand prints and right foot on a cement block on the track's Walk of Fame earlier Saturday. It's been a tradition for each Daytona 500 champ since 1996.
Dillon has enjoyed the spoils that come with winning NASCAR's biggest race, including a visit with retired NBA great Shaquille O'Neal.
"He wrapped his hand around mine twice when I shook it," Dillon said. "He just told me some pretty cool things, so it was cool hanging out with him because I've always been a great fan of him."

PIT CREW HISTORY
Brehanna Daniels and Breanna O'Leary worked as tire changers for Rick Ware Racing driver Ray Black Jr.
Daniels is believed to be the first female black crew member to compete in a NASCAR national series event. She had pitted in more than 25 Xfinity, Truck and ARCA races and made her Cup debut on Saturday night.
"What I'm doing in NASCAR is so much bigger than me," she said. It's been so rewarding to be part of history while at the same time inspiring others to take on challenges they thought might not be possible."
O'Leary made her third appearance overall in the Cup Series and second this season.
O'Leary and Daniels, roommates in North Carolina, are the fifth and sixth female NASCAR Drive for Diversity crew members to reach the Cup series.

UP NEXT
Another Saturday night race, this one at Kentucky Speedway. Truex is the defending race champion.