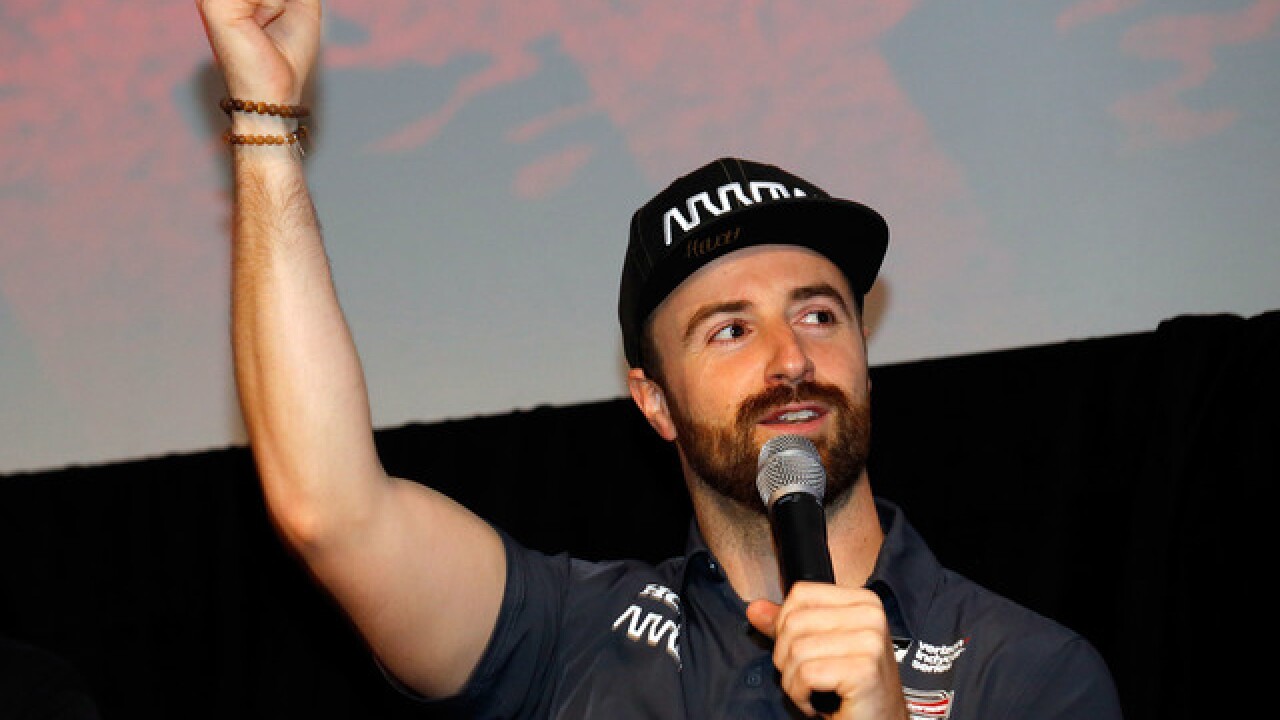 Copyright Getty Images
Richard Rodriguez
<p>FORT WORTH, TX - FEBRUARY 28: James Hinchcliffe, driver of the No. 5 Honda for Schmidt Peterson Motorsports, speaks during a Q&A during the Media Day presentation at Texas Motor Speedway on February 28, 2018 in Fort Worth, Texas. (Photo by Richard W. Rodriguez/Getty Images for Texas Motor Speedway)</p>

He could be suiting up in one of those cars next Sunday. Perhaps Pippa Mann will join him.

As Schmidt Peterson Motorsports continued searching for a way to get Hinchcliffe into the race, the popular Canadian driver refused to lobby for a ride and acknowledged that he didn't expect to start in the 33-car field.

"At this point, I believe I won't," he said. "I know there's precedent for doing that, but at the end of the day, every single driver in this race earned their way in and it's hard to knock someone out of that."

The clearest path to make it in would be replacing teammate and Indy-only driver Jay Howard.

Hinchcliffe, SPM's top driver, is fifth in the season standings and gaining no points in a double-points race would likely knock Hinchcliffe out of contention. Plus, his primary sponsor, Arrow Electronics, has its name on a massive temporary suite complex in the speedway's first turn.

There was no immediate indication a move would take place, though.

One reason for the holdup: Rules prevent teams from making driver changes until qualifying ends because the penalty for such a decision would be to start from the back of the field.

Another possibility to get the two eliminated drivers, Hinchcliffe and Mann, on the starting grid vanished when Jay Frye, IndyCar's president of competition and operations, told The Associated Press the field would not be expanded.

It was common practice for decades for more than 33 drivers to show up at Indianapolis Motor Speedway, with many top names failing to make the biggest race in America.

But "bumping" had faded away in a down economy and more than 33 drivers showed up at Indy this year for the first time in three seasons. It meant two would not make "The Greatest Spectacle in Racing" -- but no one thought it would be Hinchcliffe or Mann, who is seeking to make her sixth Indy 500 and join Danica Patrick as the only women in the field.

There's another avenue, too -- cutting a deal for a qualified car. That's what Andretti Autosport did in 2011 to get Ryan Hunter-Reay back in the race.

That possibility has thrust others, such as Conor Daly, into the mix. He struggled to make the cut Saturday and qualified 33rd with the slowest average Sunday, 224.420. Daly is the stepson of speedway president Doug Boles.

Mann is the third driver in Coyne's stable.

The decision, of course, doesn't rest exclusively with a driver, though. Frye said each team can make changes or purchase rides.

Like Mann, Howard spends all year raising money just to run at Indy. He was criticized at the start of the season by rival owner Chip Ganassi as a driver not fresh enough to be participating in the Indy 500. Ganassi cited Howard's role in a spectacular crash in last year's race with his own driver, Scott Dixon, as evidence.

Howard has 13 career IndyCar starts, and his appearance in last year's Indy 500 was his first race since 2011. He's a special third entrant on the Schmidt team for Indy and will start 28th, the inside of Row 10, after posting a 225.388 mph on Sunday.

Hinchcliffe is the face of a national Honda campaign that's been running all season and likely spent significant money on advertising time on ABC's broadcast next week. Not having him in the race would be a blow to Honda, his championship hopes, his sponsor and the rejuvenated Schmidt race team.

The 2016 Indy pole winner acknowledged that being left out hurts -- but it could be worse.

"I might not be in the 33, but I also wasn't sitting in a hospital with tubes coming out of me and 10 doctors around," Hinchcliffe said, referring to the life-threatening injury he suffered in a 2015 crash at Indy.

Dale Coyne Racing already has made one driver swap because Pietro Fittipaldi, the scheduled Indy 500 driver, broke his legs in a crash earlier this month in Belgium. Zachary Claman De Melo, a Canadian rookie, is scheduled to make his Indy 500 debut as Fittipaldi's replacement.

Mann is one of nine women who have started the Indy 500. Her best finish was 17th last season.