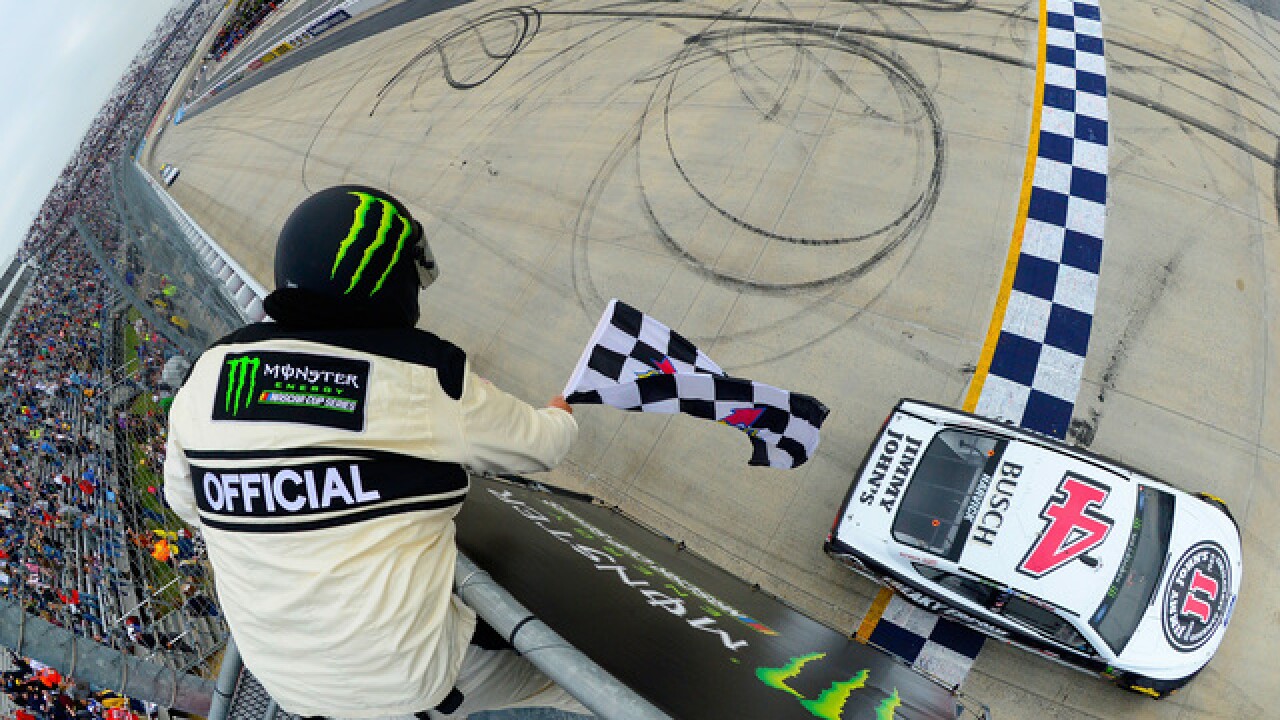 Harvick reeled off three straight wins at Atlanta, Las Vegas and Phoenix earlier this season and now has the 60-pound Miles the Monster trophy to add to his collection.

Harvick swept the first two stages and easily chased down Stewart-Haas Racing teammate Clint Bowyer in the third for the lead after a 41-minute delay. Bowyer had asked for a rain dance when the race was stopped with 80 laps left.

Once it resumed, Harvick waltzed his way into victory lane in the No. 4 Ford. He led 201 of 400 laps and stormed past Bowyer and took the lead for good with 62 laps left.

Harvick's 41st career Cup victory gives him a stout nine top-10 finishes and eight top-fives in 11 starts this season. He held four fingers out the window as he took a victory lap on the mile concrete track and won at Dover for the second time.

SHR had three cars in the top five with Harvick, Bowyer and Busch.

"Three cars in the top five says a lot about where we are as a company," Harvick said. "It's fun racing your teammate."

SHR has five wins this season and has never won more than six in its 10-year history.

Here's what else happened at Dover:

KYLE BUSCH OUT
Kyle Busch failed to finish a race for the first time this season because of a broken drive shaft on the No. 18 Toyota.
Busch, who had complained of a vibration for most of the race, was running third when the part finally broke and dumped oil across the track.

DOVER DATE
Dover had its earliest Cup date since it started in 1969.
"NASCAR and the networks, they have a pretty tough job of balancing everything out," track president Mike Tatoian said. "If you look at the overall NASCAR schedule, it may be an improvement. But that means some tracks get the short end of the stick, some tracks get the benefit from it. From our perspective, if we had our choice, of course we'd go later."

BACK IT UP
Pole sitter Kyle Larson was sent to the back of the field because his No. 42 Chevrolet failed pre-race inspection three times. Larson had won his fifth career pole and was a heavy favorite on the strength of two runner-up finishes at the track.
Alex Bowman and Austin Dillon also were sent to the rear because of inspection issues with their cars. Larson and Bowman lost their car chiefs, and both teams were docked 30 minutes of practice next week at Kansas Speedway.

BABY ON BOARD
Larson said John Hunter Nemechek is on call for Kansas in case the Larsons' second baby is born.

BUH-BYE, BAYNE
Trevor Bayne, the 2011 Daytona 500 champion, is set to yield the No. 6 Ford next week to the returning Matt Kenseth. Kenseth, a two-time Daytona 500 winner and former Cup champion, was hired by Roush Fenway Racing to split races with Bayne.

UP NEXT
The series shifts to Kansas Speedway, where Martin Truex Jr. is the defending race winner.