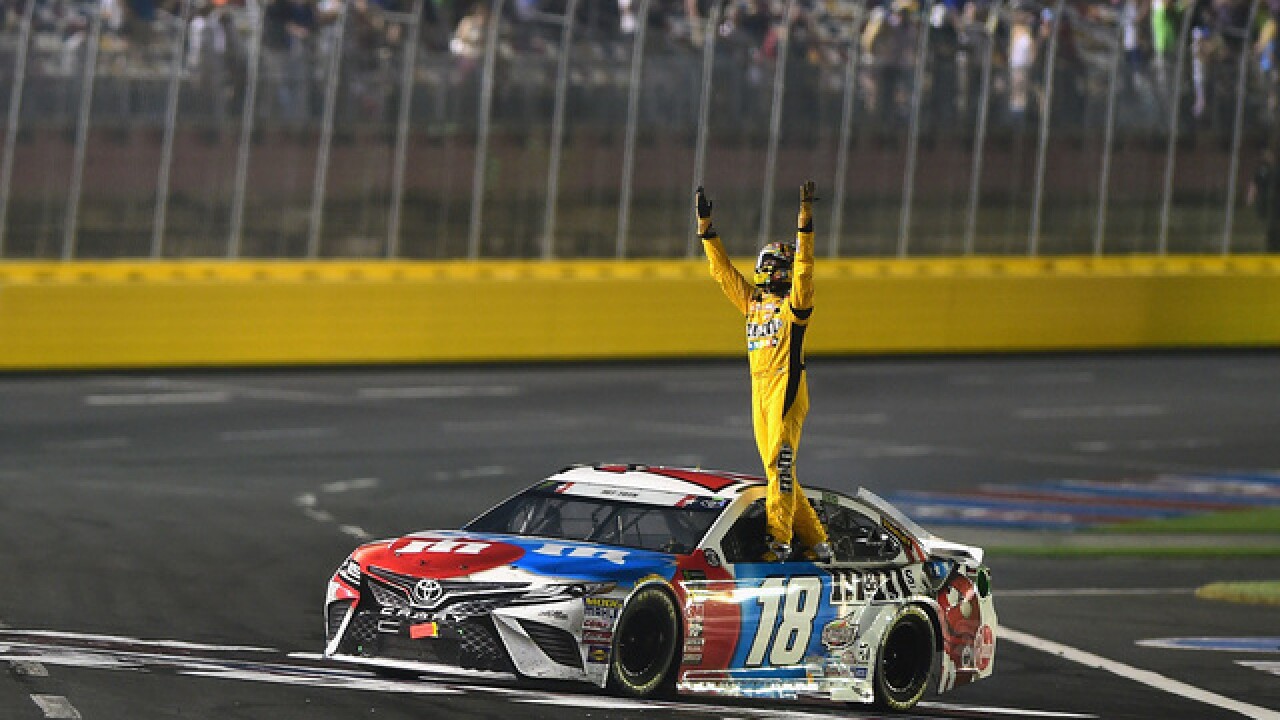 CONCORD, N.C. (AP) -- Kyle Busch led 377 of 400 laps in a dominating Coca-Cola 600 run at Charlotte Motor Speedway to finally break through with a points-race victory at the only NASCAR Cup track that had eluded him.

Busch started on the pole, won every stage in the circuit's longest race and left everyone else in the field fighting for second on the way to his fourth victory of the season.

The victory gave Busch a points-race win at every NASCAR track on the schedule.

"I don't know if it has ever been done before but the first one ever to check off all of the tracks and get it all done," Busch said. "I don't want to go to any new ones so now we just have to start the whole process over."

Martin Truex Jr. was second, some four seconds behind. It was two years ago Truex had his own mind-boggling performance, leading 392 of 400 laps for a NASCAR record 588 of 600 miles to win at Charlotte.

Kevin Harvick's try for a third straight points win this month ended with an early accident.

Busch's victory ended a day of dominance on racing's single biggest day. Things began with Australia's Daniel Ricciardo taking the pole and leading every lap at the Monaco Grand Prix. It continued at the Indianapolis 500 with Will Power giving owner Roger Penske his 17th win at the Brickyard.

Once Busch took the track, he quickly proved he would not be kept out of Charlotte's Victory Lane again.

This race figured to be a match race between NASCAR's two hottest drivers in Busch and Kevin Harvick.

Harvick had won five times, including the past two points events and the All-Star race here last week.

Instead, Harvick's race ended early after an accident on lap 83. Harvick hit the wall, cut a front tire and trailed sparks on the track toward the garage.

Harvick showed off one of the best cars, rallying from starting 39th due to inspection problems this week to get the fourth before his problems began.

"Happy" Harvick didn't sound too broken up about his quick night. "I can't complain about anything that's happened this year," said Harvick, who finished last. "We have to take the good with the bad."

Harvick last left the track early in the season-opening Daytona 500, then followed that with three straight victories.

WHO'S HOT
Things may be turning around for seven-time NASCAR series champion Johnson, who had his fifth top-10 finish this season and fourth in the past six races. Johnson rallied from a mid-race spin to get himself into the top five.

WHO'S NOT
Harvick wasn't the only contender to leave the track early. Defending champion Austin Dillon also hit the wall after blowing a tire. Smoke enveloped his pit area as Dillon's team tried to repair the damage and the car headed to the garage for extensive fixes before coming back to the track 52 laps down.

UP NEXT
The series heads to Pocono Raceway next Sunday to start the second half of the 26 regular-season races.