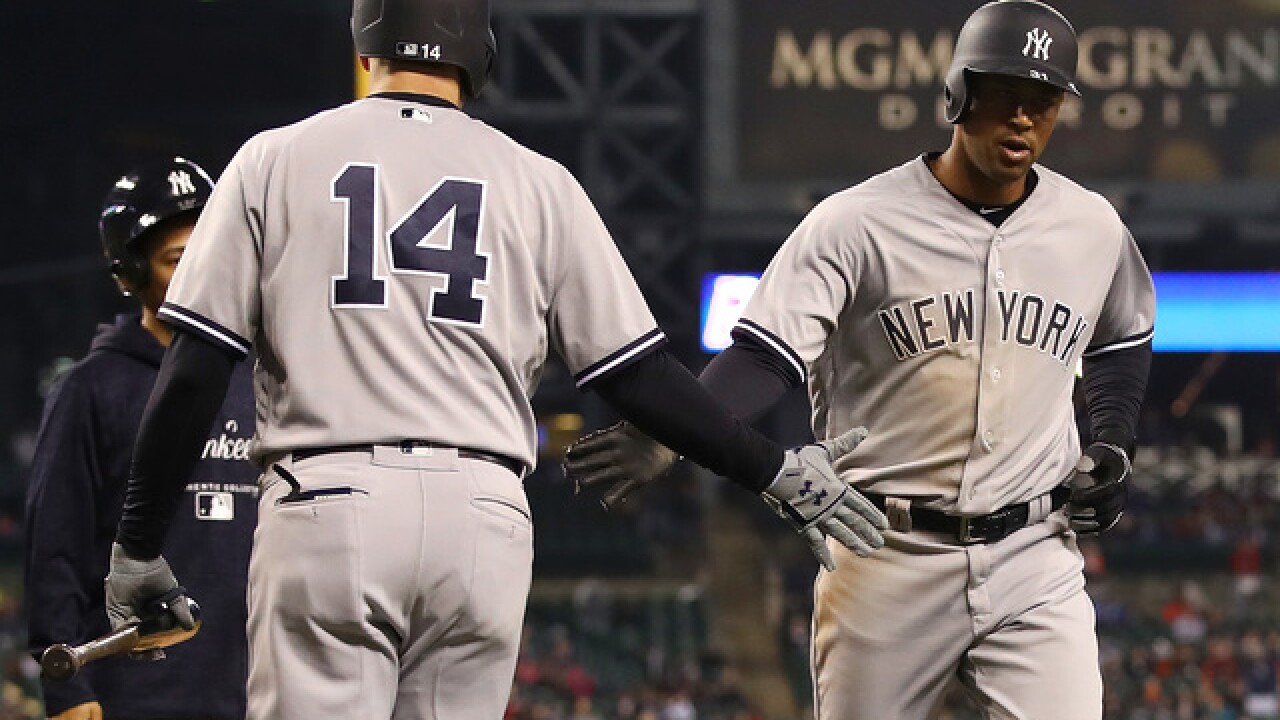 DETROIT (AP) -- Aaron Hicks hit an inside-the-park home run in the second inning, then added a solo shot over the fence in the sixth to send the New York Yankees to an 8-6 victory over the skidding Detroit Tigers on Friday night.

Hicks came up with a runner on second and hit a drive to right-center that bounced off the wall and past center fielder Leonys Martin. The ball rolled across a vacant area of turf while Hicks circled the bases for the Yankees' first inside-the-park homer since 2011.

He was able to trot home four innings later, when his homer to right cleared the wall by plenty. Hicks also homered twice on April 13 last year, against Tampa Bay.

Jordan Montgomery (1-0) allowed three runs and five hits in six-plus innings. New York's bullpen struggled to hold on, but Aroldis Chapman struck out the side in the ninth for his second save.

Mike Fiers (1-1) gave up five earned runs in 5 2/3 innings for the Tigers, who have lost five straight. James McCann and Jeimer Candelario homered for Detroit.

It was not a good second inning for the Tigers in the outfield. Gary Sanchez hit a one-out double that right fielder Nicholas Castellanos appeared to have a chance to catch in front of the wall. At the last moment, however, Castellanos ducked and the ball went over his head.

Hicks followed with his first home run to give New York a 2-0 lead. The Yankees' previous inside-the-park homer was by Curtis Granderson at Minnesota on Aug. 21, 2011.

Brett Gardner brought home another run in the fifth with a bloop double, and Aaron Judge drove in Gardner with a single. The Yankees added an additional run that inning on second baseman Dixon Machado's throwing error.

McCann hit a solo home run in the fifth, but Hicks -- in only his second game back from a right intercostal strain -- made it 6-1 in the sixth with his second homer of the night.

Victor Martinez hit an RBI double in the seventh for Detroit, and he scored on McCann's sacrifice fly. New York scored twice in the eighth, on an RBI single by Ronald Torreyes and a sacrifice fly by Didi Gregorius.

Candelario led off the eighth with a homer, and McCann and Jose Iglesias added RBI singles to make it 8-6.

TRAINER'S ROOM
Yankees: Manager Aaron Boone said LHP CC Sabathia, on the disabled list with a right hip strain, could return in the next few days, perhaps Tuesday. ... Boone said he spoke Friday with 3B Brandon Drury, who has been dealing with headaches and blurry vision. "He sounded upbeat. He sounded like he was in a good place, and felt like he was at least starting to scratch the surface on some answers, hopefully," Boone said.
Tigers: Martin was face down in the batter's box for a little while after he appeared to foul a pitch off his right knee in the first. He remained in the game.

UP NEXT
RHP Luis Cessa (0-0) is set to start Saturday for the Yankees against Tigers LHP Francisco Liriano (1-1), although there's a possibility of severe weather that could make it difficult to play any more baseball Saturday or Sunday in Detroit.