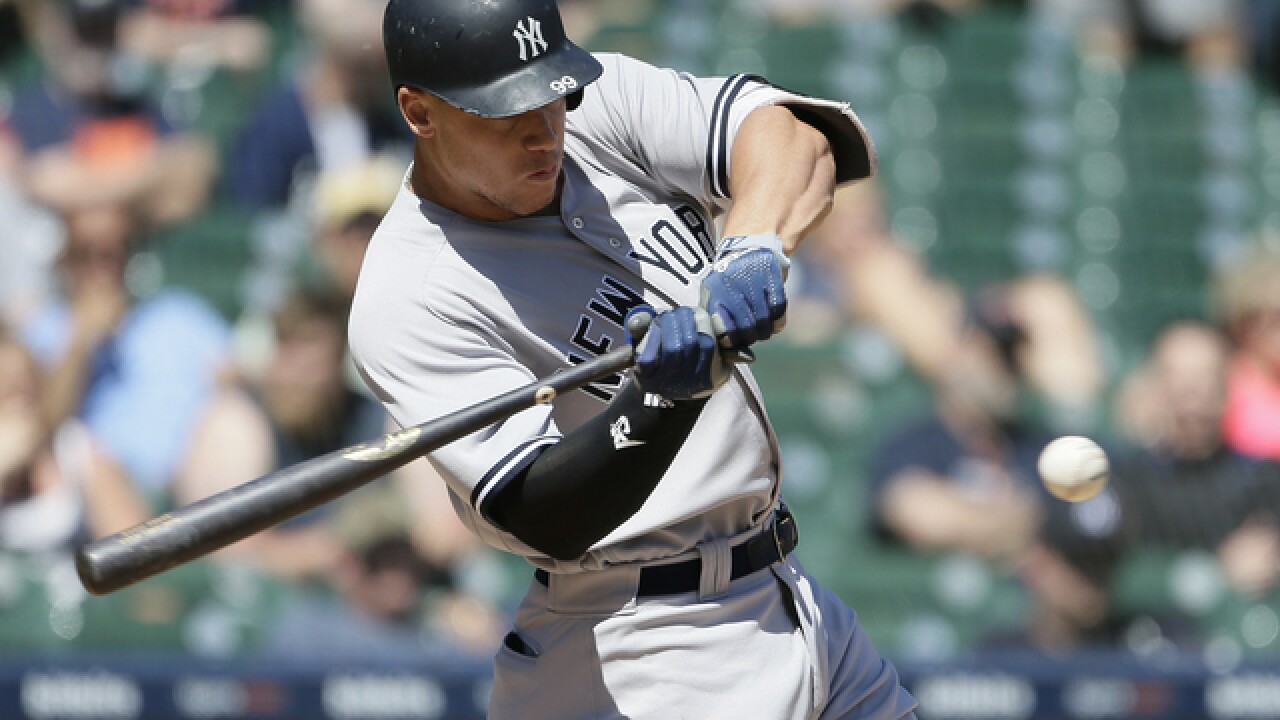 Copyright Getty Images
Duane Burleson
<p>DETROIT, MI - JUNE 4: Aaron Judge #99 of the New York Yankees foul tips the ball to strike out against the Detroit Tigers during the ninth inning of game one of a doubleheader at Comerica Park on June 4, 2018 in Detroit, Michigan. The Yankees defeated the Tigers 7-4. (Photo by Duane Burleson/Getty Images)</p>

DETROIT (AP) -- Yankees slugger Aaron Judge became the first player since at least 1920 with eight strikeouts in a doubleheader, including five punchouts in the nightcap as the Detroit Tigers beat New York 4-2 for a day-night split Monday.

Leonys Martin had two hits and scored twice for Detroit in the second game after New York took the opener 7-4 behind Luis Severino's eight strong innings and a six-run fourth inning.

Judge struck out eight times in nine at-bats, a record for a doubleheader during the liveball era, according to STATS. Judge struck out in each of his five at-bats in the late game, including with a runner aboard in the bottom of the ninth.

The five strikeouts were a career high for Judge, who led the majors with 208 strikeouts while winning AL Rookie of the Year last season.

The doubleheader made up rainouts from April 14 and 15. Both teams wore No. 42 for the second game because they were making up their postponed Jackie Robinson Day showdown.

Mike Fiers (5-3) got the win in the nightcap, allowing two runs in 5 2/3 innings. Three relievers finished, with Shane Greene striking out three in the ninth for his 15th save. Detroit's pitchers combined for 14 strikeouts in the game.

Martin doubled and scored on Ronny Rodriguez's sacrifice fly in the second for Rodriguez's first major league RBI, and Brett Gardner tied it with an RBI triple in the third.

Fiers plunked Giancarlo Stanton later in the inning, leading to a brief verbal exchange between the pitcher and slugger. Fiers then got Gleyber Torres to ground out to leave the bases loaded.

Stanton hit a 456-foot homer in the sixth, then pointed at Fiers as he crossed the plate.

Miguel Cabrera and Victor Martinez hit back-to-back doubles in the seventh to give Detroit a 4-2 lead. The Tigers have hit a double in 52 consecutive games, their third-longest such streak since 1908.

Severino and New York's bats had given the Yankees a good start to the day.

"We sent our ace out there for the first game and counted on him giving us a big performance," Yankees manager Aaron Boone said.

Severino did just that, striking out 10 to win his seventh straight decision and extend New York's winning streak to five games.

Austin Romine hit a three-run homer, and Torres and Greg Bird each homered for the AL East-leading Yankees, who briefly moved 21 games over .500 for just the second time since ending the 2012 season at 95-67; the Yankees were 91-70 last year before losing their regular-season finale.

"I didn't get deep into the game, and I didn't give us a chance to win," VerHagen said after his first major-league start since August. "There's not much to like about that game."

Torres became the first Yankees player under 22 to hit 10 home runs in a season since Mickey Mantle from 1951-53.

Cabrera hit an RBI double in the first, but Torres tied it in the third when he became the fifth New York player to reach double digits in home runs this season; Candelario leads the Tigers with nine.

Sandy Baez, a 24-year-old right-hander making his major league debut for the Tigers as their 26th man, pitched 4 1/3 hitless innings of relief.

Baez hit his first batter, Bird, then struck out Stanton.

"I'm going to keep that ball wherever I go," Baez said. "I'll have it when I'm driving and when I'm at home."

BIG MOMENT
The Tigers' front office was probably not focused on Fiers' first pitch of the nightcap. Twenty-two seconds later, they selected Auburn pitcher Casey Mize with the first pick in the MLB Draft.

FLIGHT DELAYS
The Yankees were delayed briefly in Baltimore after a radar problem on their charter and arrived in Detroit at 8:30 p.m. Sunday. On May 17, the Yankees were forced to spend a night in Dulles International Airport outside Washington, D.C., after the plane had mechanical problems in bad weather. New York had another lengthy delay at Dallas/Fort Worth International Airport on May 24.

TRAINER'S ROOM
Yankees: Frazier was recalled from Triple-A Scranton/Wilkes-Barre to serve as New York's 26th player in the doubleheader. He started both games in left field. . The Yankees activated RHP Adam Warren from the 10-day DL between games and optioned RHP Tommy Kahnle to Triple-A Scranton/Wilkes-Barre.
Tigers: C John McCann sat out the first game after leaving Sunday's game with an intercostal strain. McCann warmed up pitchers between innings and was in the lineup for the nightcap.