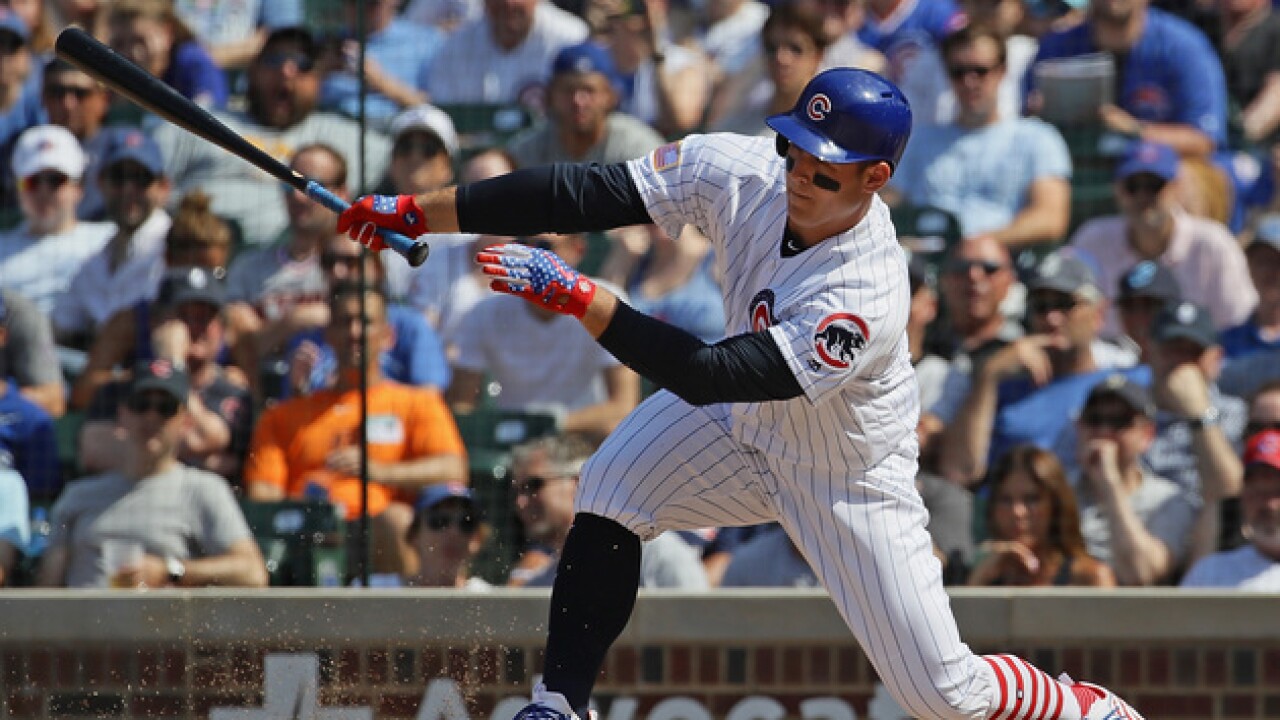 Copyright Getty Images
Jonathan Daniel
<p>CHICAGO, IL - JULY 03: Anthony Rizzo #44 of the Chicago Cubs drives in a run in the 7th inning against the Detroit Tigers at Wrigley Field on July 3, 2018 in Chicago, Illinois. (Photo by Jonathan Daniel/Getty Images)</p>

CHICAGO (AP) -- Anthony Rizzo drove in his second run of the game in the seventh inning to snap a tie, Kyle Schwarber followed with a solo homer in the eighth and the Chicago Cubs rebounded from an early three-run deficit to edge the Detroit Tigers 5-3 on Tuesday for their fifth straight win.

With one out in the seventh, Jason Heyward and Ben Zobrist singled off Tigers reliever Daniel Stumpf (1-4). Rizzo's slow bouncer up the middle resulted in a force of Zobrist at second, but Jose Iglesias' throw to first was too late to double up Rizzo and Heyward scored from third to put Chicago ahead for the first time, 4-3.

Schwarber hit his team-leading 17th homer to right against a steady wind off Lake Michigan in the eighth.

Trailing 3-0, Albert Almora, Jr. and Heyward each drove in a run with a double, then Rizzo followed with an RBI single in Chicago's three-run fifth.

Detroit leadoff hitter Mikie Mahtook had three singles and scored a run. Niko Goodrum drove in a run with a double, and Jeimer Candelario and James McCann each had an RBI as the Tigers lost their 12th game in their past 14.

Justin Wilson (3-2), Chicago's second reliever, worked around an error to pitch a scoreless seventh and earn the win. Pedro Strop pitched a scoreless ninth for his second save in four chances.

Cubs starter Kyle Hendricks labored through five innings, allowing three runs and seven hits in a no-decision. In his past six starts, the right-hander is 1-4 with 6.75 ERA.

The Tigers jumped out to a 2-0 lead in the first. After Mahtook and Nick Castellanos led off with singles, Candelario drove in a run with a groundout. Goodrum's double to the right-field corner scored the second run.

The Tigers added a run in the fourth on McCann's RBI single.

The Cubs tied it 3-all in the fifth. Pinch-hitter Tommy LaStella, Almora and Heyward led off with consecutive doubles to cut it to 3-2, then Rizzo's hit with one out tied it.

WINDY CITY TIGER
INF/OF Jim Adduci, called up from Triple-A Toledo on Sunday, was in Detroit's lineup at first base and singled and scored in his first game this season. The 33-year-old attended Evergreen Park High School in Chicago's south suburbs and grew up a fan of both the Cubs and White Sox. Adduci's father, also named Jim, played a total of 70 games with three major league teams in the 1980s and was at Wrigley Field on Tuesday.

TRAINER'S ROOM:
Cubs: INF/OF Kris Bryant (left shoulder inflammation) could return on Wednesday or Friday, manager Joe Maddon said before the game. The Cubs star has been sidelined since June 22. ... RHP Yu Darvish (right triceps inflammation, right elbow impingement/inflammation) rejoined the Cubs after seeing Dr. Keith Meister in Texas on Friday and getting a cortisone shot. Maddon said he hadn't yet talked to right-hander about his progress following the injection.

UP NEXT:
Tigers LHP Francisco Liriano (3-4. 3.99) takes the mound against Cubs LHP Jose Quintana (6-6. 4.31) on Wednesday afternoon in the finale of the two-game interleague set. Liriano has lost both of his starts since coming off the disabled list (right hamstring strain) on June 23. Quintana has two losses and three no-decisions in his past five starts and hasn't won since May 31.