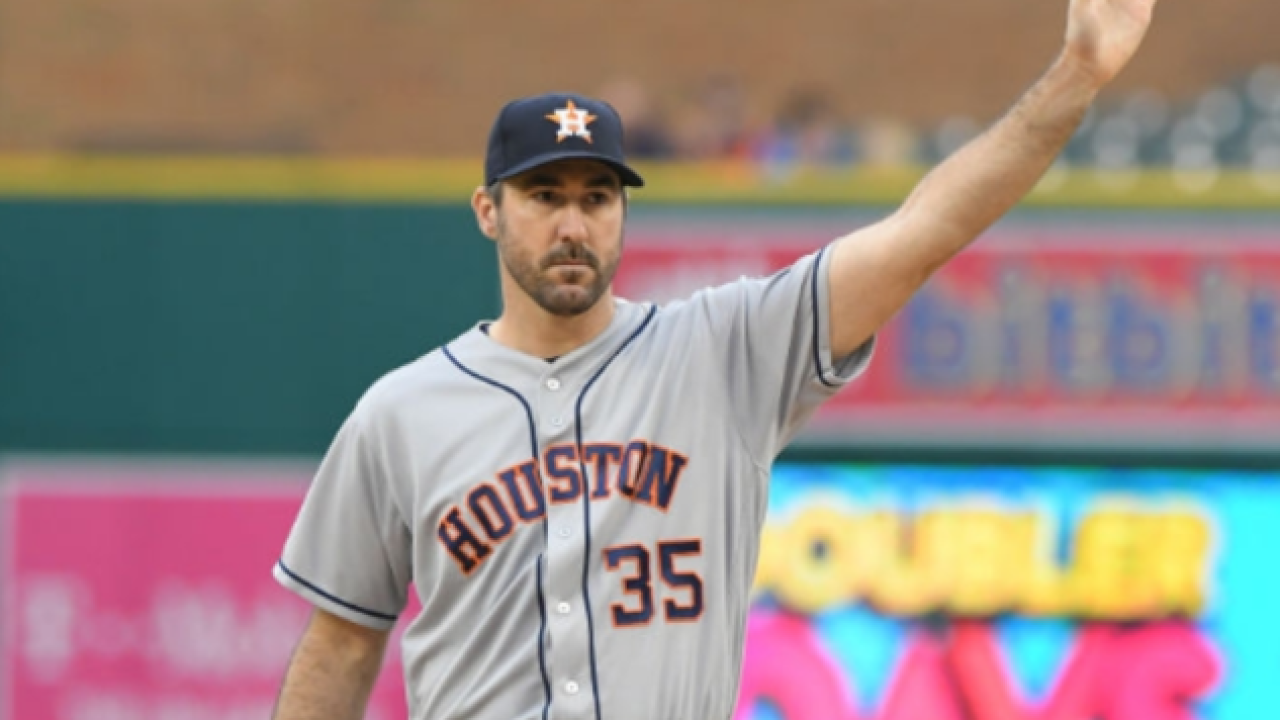 Copyright Getty Images
Mark Cunningham
<p>DETROIT, MI - SEPTEMBER 10: Justin Verlander #35 of the Houston Astros waves to the crowd while taking the mound in the first inning of the game against the Detroit Tigers at Comerica Park on September 10, 2018 in Detroit, Michigan. (Photo by Mark Cunningham/Getty Images)</p>

DETROIT (AP) -- Justin Verlander made it seem like old times at Comerica Park, drawing several big cheers and pitching seven sharp innings in his return to his former home while leading the Houston Astros over the Detroit Tigers 3-2 Monday night.

Verlander struck out 10 in his first game in Detroit since being traded to Houston in August 2017. The World Series champion Astros opened a three-game lead over Oakland atop the AL West.

Verlander (15-9) made his major league debut with Detroit in 2005 and ranks among the top 10 on several of the team's career pitching lists.

The 35-year-old righty received a lengthy standing ovation after a video tribute was played as he walked in from the bullpen, and another when he came out to warm up for the first inning. Both times, he tipped his cap and waved to the crowd.

Verlander allowed two runs on six hits and one walk, improving to 98-50 at Comerica Park. Max Scherzer is second in career wins at the stadium with 46, while Jordan Zimmermann leads current Tigers with 14.

The Tigers put two runners on in the seventh, but Verlander struck out JaCoby Jones and Jeimer Candelario to escape with a 3-2 lead. He received a third standing ovation after the inning, having thrown 104 pitches.

Roberto Osuna worked the ninth for his 16th save, including seven with Houston.

Francisco Liriano (4-10) allowed three unearned runs on four hits and four walks in six innings. He struck out seven in his longest outing since pitching six innings on July 4.

The Tigers took the lead in the second. Niko Goodrum doubled and later scored on a single by Dawel Lugo.

Verlander settled down after the second, retiring the next nine batters. Candelario walked to start the sixth, Christin Stewart followed with his first major league hit and Nicholas Castellanos had a sacrifice fly.

Castellanos made a leaping catch at the right field fence to take an extra-base hit away from Gonzalez in the eighth.

Josh Reddick, in the game for Houston as a defensive replacement, started an inning-ending double play in the eighth with a sliding catch in left field.

EARLY START
The game started at 6:10 p.m., an hour earlier than originally scheduled, to try to ease traffic congestion with the Detroit Lions opening their season next door against the New York Jets. A day game wasn't possible because of the Astros playing on Sunday night in Boston.