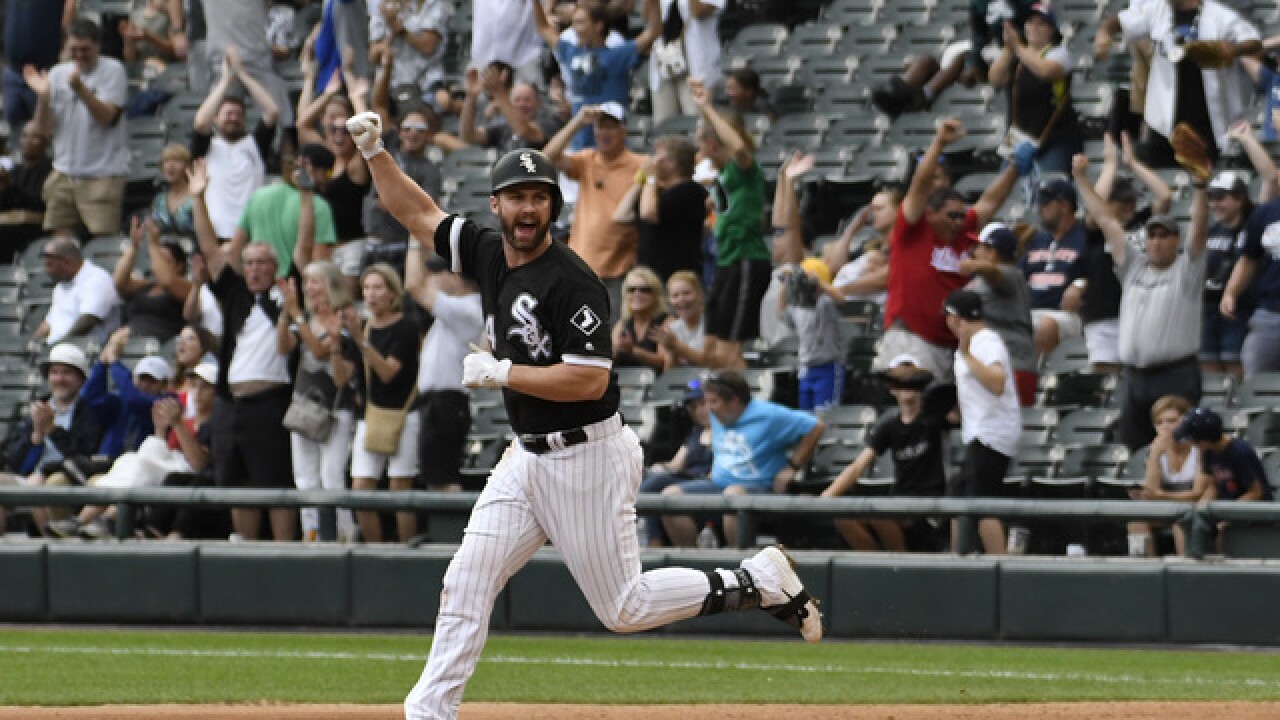 CHICAGO (AP) -- Matt Davidson, Daniel Palka and the Chicago White Sox struck late -- and quickly -- to pull out another victory.

Davidson hit a two-run, game-ending homer as the White Sox scored three times in the bottom of the ninth to beat the Detroit Tigers 4-2 on Monday for their eighth win in 11 games.

Davidson hit his 20th homer into the left-field bullpen on the first pitch his saw from Detroit closer Shane Greene (2-6) after Welington Castillo singled. Daniel Palka's 21st homer to lead off the ninth tied it at 2.

The rebuilding White Sox are finding ways to win down the stretch, even if they're all but eliminated from postseason contention.

"Everything's kind of clicking together," Davidson said. "Late August and September obviously can be long, so when you win, it's a lot of fun. It makes the days go by a little bit quicker, and we're just enjoying it."

The left-handed hitting Palka went deep for the second straight day and leads the major with six homers in the ninth. This time he hit a shot to deep left-center.

"Who knows why he's able to do that," manager Rick Renteria said. "He seems to bear down, and he got a pitch he could handle and drove it the other way."

Victor Martinez homered deep to left with one out in the top of the ninth off Jace Fry (2-2) to put Detroit ahead 2-1. Greene then failed to retire a batter in the ninth as he blew his fifth save.

"It happened," said Martinez, who sat out Sunday in New York and was questionable for this one with flu-like symptoms. "Shane has been doing great for us all year long and he's only human."

"He's thrown one time in four days," manager Ron Gardenhire said. "He's our closer. He gets the ball. He just made two bad pitches."

Niko Goodrum's solo shot in the seventh tied it 1-all after Chicago's Nicky Delmonico homered to lead off the game for Chicago.

Both starters, Chicago's Reynaldo Lopez and Detroit's Michael Fulmer, were strong in no decisions.

Lopez yielded just one run on four hits and struck out seven in seven innings. He was sailing along with a shutout in his third straight solid start until Goodrum homered.

Fulmer allowed only one hit -- Delmonico's lead-off homer -- before leaving with two outs in the sixth after being struck by Palka's sharp comebacker. The Tigers said the right-hander has a right shin contusion and is day-to-day.

Fulmer crumpled to the ground after being hit by Palka's smash, and the ball deflected to Goodrum who stepped on first to record the out. After being tended to by a trainer, Fulmer walked off the field slowly and was replaced by Drew VerHagen.

Fulmer, who hasn't won since June 14, walked four and struck out five in one of his best performances this season.

PROSPECTING
White Sox GM Rick Hahn doesn't want to rush top prospect Eloy Jimenez and that's he why didn't call up the 21-year-old outfielder when rosters expanded Saturday. But Hahn said Jimenez "is very well positioned to make a significant impact at the big-league level at age 22 next year."
Jimenez is hitting .355 with 12 homers with 33 RBIs in 55 games at Triple-A Charlotte. The Dominican Republic native started the season at Double-A Birmingham.
Hahn said not calling up Jimenez in September had nothing to do with service time and potential free agency.
If the outfielder were recalled now, he would be eligible to file for free agency entering 2025. If Jimenez spends the first 20 days of the 2019 season on optional assignment, his free agency would be delayed until after 2025. That means April 17, 2019, would be the earliest the White Sox could call up Jimenez and retain control of him through 2025.

CHISOX ROSTER MOVES
White Sox C Castillo (right shoulder) came off the disabled list and made his first appearance since May 23. During most of his absence Castillo was serving an 80 game-suspension, handed out on May 24 after he tested positive for a performance-enhancing substance. ... Chicago also recalled OF Ryan Cordell from Triple-A Charlotte.

TRAINER'S ROOM
Tigers: Manager Ron Gardenhire said LHP Daniel Norris is fine after suffering a left calf cramp in New York on Saturday and leaving the game in the fifth inning.
White Sox: 1B/DH Jose Abreu returned the clubhouse after undergoing lower-abdominal/groin surgery on Aug. 21. Hahn said the slugger, who leads Chicago with 22 homers and 78 RBIs, could return by mid-September. ... OF Ryan LaMarre (right hip soreness) was available off the bench. ... RF Avisail Garcia (right knee soreness) was out of the lineup for a second straight day and is day-to-day.