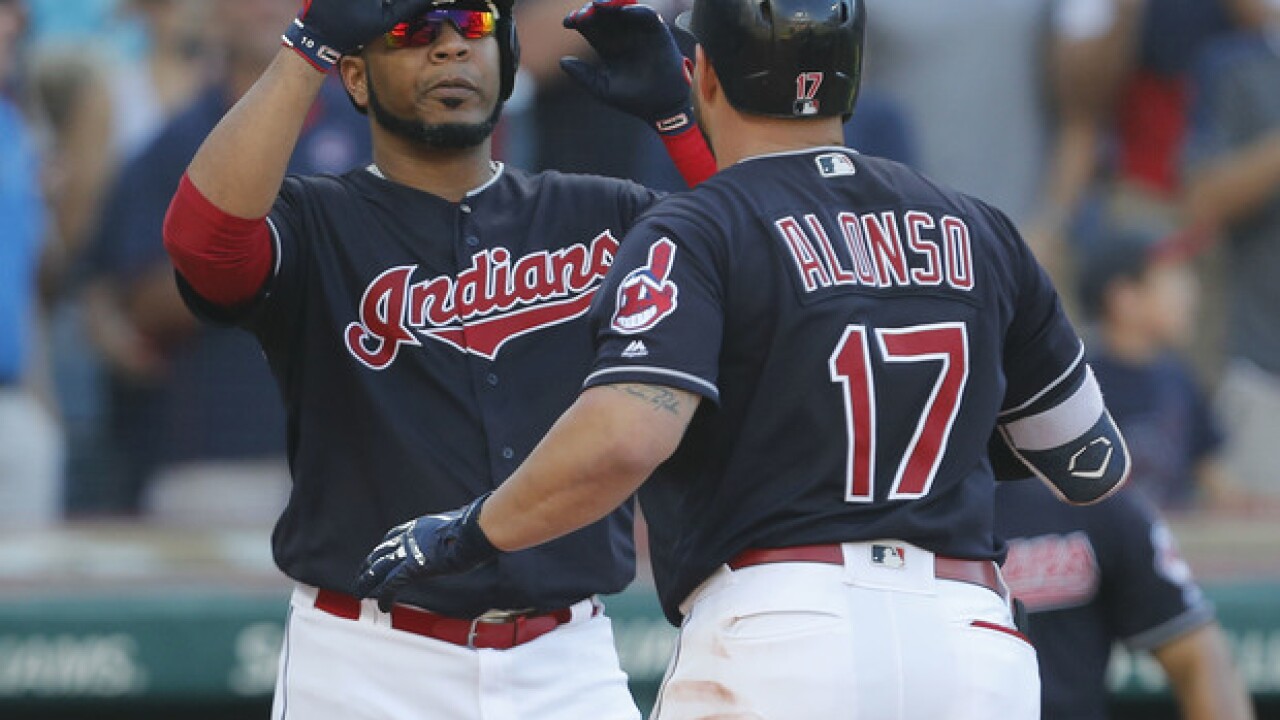 CLEVELAND (AP) -- Unchallenged for months, the Cleveland Indians clinched their third straight AL Central title with a 15-0 blowout on Saturday of the Detroit Tigers, who made four errors and managed only two hits.

Francisco Lindor and Michael Brantley connected for back-to-back homers in the first inning off Michael Fulmer (3-12), Jose Ramirez had three hits and the Indians built an 11-0 lead after two on the way to becoming the first team to clinch a division championship.

It's the initial step toward an October when Cleveland will try to win its first World Series since 1948 -- the longest drought in the majors. After so many close calls, the Indians believe this is their year.

Cleveland's current three-year reign in the Central is the club's longest since winning five straight from 1995-99. The Indians became the first team this year to clinch a division and the second assured of the postseason after Boston, which will be no worse than a wild card.

Mike Clevinger (12-8) allowed one hit in six innings, and Yonder Alonso added a two-run homer as Cleveland's offense awakened from a late-season slump.

The lone blemish for the Indians was an injury to designated hitter Edwin Encarnacion, who rolled his right ankle while rounding second base in the fourth. The team said the sprain was mild, but it's one more issue manager Terry Francona must monitor while getting his team ready for the postseason.

The Indians removed any suspense about whether they would clinch by scoring six times in the first, the outburst triggered by the shots from Lindor and Brantley off Fulmer, who was pulled after five pitches because of knee inflammation.

Lindor's 35th homer was also the All-Star's eighth leading off, breaking the club record he shared with Grady Sizemore (2008). Brantley followed with his 16th homer, prompting Tigers catcher Brian McCann to wave to Detroit's dugout to check Fulmer. The 2016 AL Rookie of the Year fell to 0-7 in his last 10 starts.

The Tigers hurt themselves by making two errors on routine grounders in the first.

Cleveland's clinching had been a foregone conclusion.

The Indians were expected to win one of baseball's least competitive divisions and did so with ease. They moved into first on April 21, took a double-digit lead for good on Aug. 8 and pulled away.

But while the standings show a runaway, the Indians, who have had their eyes on the upcoming postseason since blowing a 2-0 lead to the Yankees in the 2017 division series, have had their share of adversity.

There have been injuries, personal setbacks and a serious health scare that fortunately ended up being only that.

Anchored by two-time Cy Young Award winner Corey Kluber, Cleveland's pitching staff has surpassed expectations. Kluber recovered from a knee problem midway through the season and has dominated, winning 18 and ranking among the league leaders in several categories. A third Cy Young is possible, but he hasn't had do it alone with Carlos Carrasco and Trevor Bauer having strong seasons.

Bauer's currently sidelined with a broken leg, and the Indians are hoping he can help in the postseason. Also, Clevinger and rookie Shane Bieber emerged as dependable starters.

The Indians' bullpen hasn't been nearly as steady.

While closer Cody Allen set the franchise career saves record, the right-hander's issues -- and impending free agency -- forced the Indians to trade top prospect Francisco Mejia to San Diego for closer Brad Hand and reliever Adam Cimber. Also, Andrew Miller has been on the disabled list three times and the two-time All-Star has been slow to return to form.

The Indians addressed their precarious outfield situation by acquiring Leonys Martin in a trade, but not long after arriving he was stricken with a bacterial infection that began shutting down organs. Martin has since recovered but his baseball future remains uncertain.

Realizing the window to end their Series drought could be closing, the Indians acquired 2015 AL MVP Josh Donaldson late last month. His arrival at third shifted Ramirez to second and pushed Jason Kipnis to center field.

But while the Indians' defense has a new look, the AL Central hasn't changed.

FAREWELL, FRIEND
Victor Martinez was overcome with emotion during a pregame ceremony to celebrate his years with the Indians. Detroit's DH plans to retire following his 18th season, ending a career that began with Cleveland in 2002.
"It's like my mom says, `We'll always have that team in your heart,"' said Martinez, who spent nearly eight seasons with the Indians.
Tigers manager Ron Gardenhire and Francona have been on both sides with Martinez.
"He's one of the reasons why I'm working for the Detroit Tigers now, instead of the old team I used to work for," said Gardenhire, who managed Minnesota from 2002-14. "When he was here he killed us. We couldn't get him out."
Francona called Martinez "one of the nicest guys in the game and one of the most professional hitters, great teammate."

TRAINER'S ROOM
Tigers: CF JaCoby Jones left with right shoulder tightness in the fourth after crashing into the center-field wall and diving for a blooper.

UP NEXT
Bieber starts the series finale looking for his 11th win. Bieber's the first Cleveland rookie to post double-digit wins since Mitch Talbot's 10 in 2010. Francisco Liriano starts for Detroit.