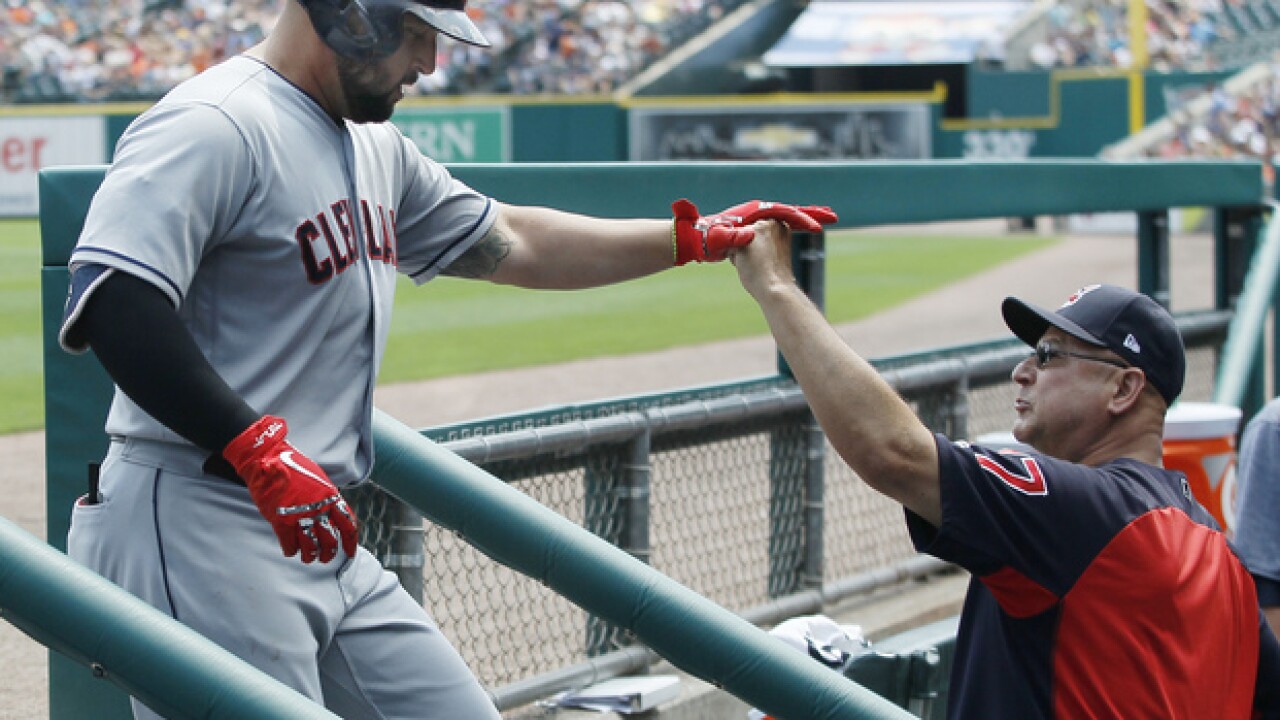 Copyright Getty Images
Duane Burleson
<p>DETROIT, MI - JULY 29: Yonder Alonso #17 of the Cleveland Indians celebrates with manager Terry Francona #77 of the Cleveland Indians after hitting a two-run home run against the Detroit Tigers during the third inning at Comerica Park on July 29, 2018 in Detroit, Michigan. (Photo by Duane Burleson/Getty Images)</p>

DETROIT (AP) -- Yonder Alonso, Melky Cabrera and Edwin Encarnacion all homered for Cleveland, and Corey Kluber pitched into the eighth inning in the Indians' 8-1 victory over the Detroit Tigers on Sunday.

Rajai Davis added a triple and two doubles for the Indians, who took two of three in Detroit and extended their AL Central lead to nine games over Minnesota. It's the largest division lead in the major leagues at the moment.

Kluber was coming off a couple rough outings. He allowed six runs to the Yankees in his last start before the All-Star break, and he went just four innings in his next appearance. He allowed a run to the Tigers in the first but kept them off the scoreboard after that.

Cabrera hit his first home run of the season, a solo shot in the second that put Cleveland ahead 2-1. Francisco Lindor added an RBI single that inning, and Alonso made it 5-1 with a two-run homer in the third.

Encarnacion's 24th homer of the year came in the seventh, a solo shot that made it 6-1. He also added an RBI single in the eighth, and Alonso followed that with an RBI double.

Kluber has won all three of his starts against Detroit this season, posting a 1.16 ERA. He's won 14 of his last 15 decisions against divisional opponents.

TRAINER'S ROOM
Tigers: Francisco Liriano, who missed a scheduled start Saturday because of an allergic reaction that was giving him rashes on his back, came on in relief of Zimmermann and pitched two scoreless innings.

UP NEXT
Cleveland travels to Minnesota for a three-game series. Shane Bieber (5-2) takes the mound Monday night for the Indians against Ervin Santana (0-0).
The Tigers are off Monday before hosting two games against Cincinnati. Detroit's Matthew Boyd (5-9) starts Tuesday night against Homer Bailey (1-7).