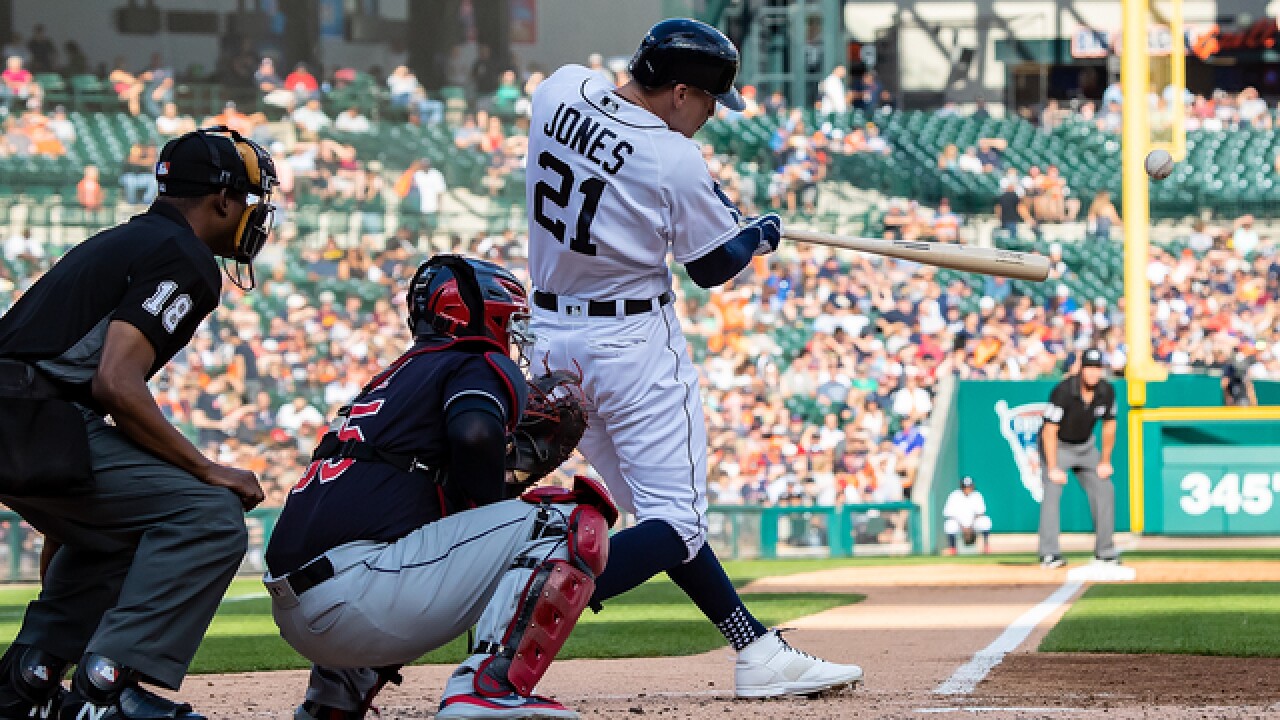 Copyright Getty Images
Dave Reginek
<p>DETROIT, MI - JULY 28: JaCoby Jones #21 of the Detroit Tigers hit a two run home run in the bottom of the third inning off of Mike Clevinger #52 of the Cleveland Indians (not pictured) during a MLB game at Comerica Park on July 28, 2018 in Detroit, Michigan. (Photo by Dave Reginek/Getty Images)</p>

DETROIT (AP) -- JaCoby Jones hit a go-ahead, two-run homer in the third inning and the Detroit Tigers held on to beat the Cleveland Indians 2-1 Saturday night.

Blaine Hardy (4-3) gave up a run over five innings. Three relivers combined to pitch four innings of scoreless relief. Shane Greene retired the side in order in the ninth for his 21st save in 24 chances.

Cleveland's bullpen kept the team within a run, but its usually potent offense was kept quiet.

The AL Central-leading Indians entered the game as the second-highest scoring team in the majors but could only score against the rebuilding Tigers on Jason Kipnis' single in the second inning.

ROSTER MOVES
Indians: RHP Adam Plutko was recalled from Triple-A Columbus and OF Tyler Naquin was put on the DL because of with a strained right hip.
Tigers: LHP Josh Smoker was claimed off waivers from Pittsburgh and sent to Triple-A Toledo.

TRAINER'S ROOM
Indians: Clevinger's start was in doubt just a couple hours before the game due to an illness. With Naquin's injury making the Indians' outfield even more banged up, manager Terry Francona acknowledged the front office is trying to trade for an outfielder.
Tigers: LHP Francisco Liriano was scheduled to start Saturday before being scratched because of an allergic reaction, giving him rashes on his back. Liriano had blood work done and results were expected Monday. ... Jones left the game after the fifth inning with tightness in his lower back.

UP NEXT
Cleveland RHP Corey Kluber (12-6) is scheduled to start Sunday on five days' rest and Detroit RHP Jordan Zimmermann (4-2) is expected to be on the mound in the series finale.