JaCoby Jones homers in seventh to lead Tigers over Twins 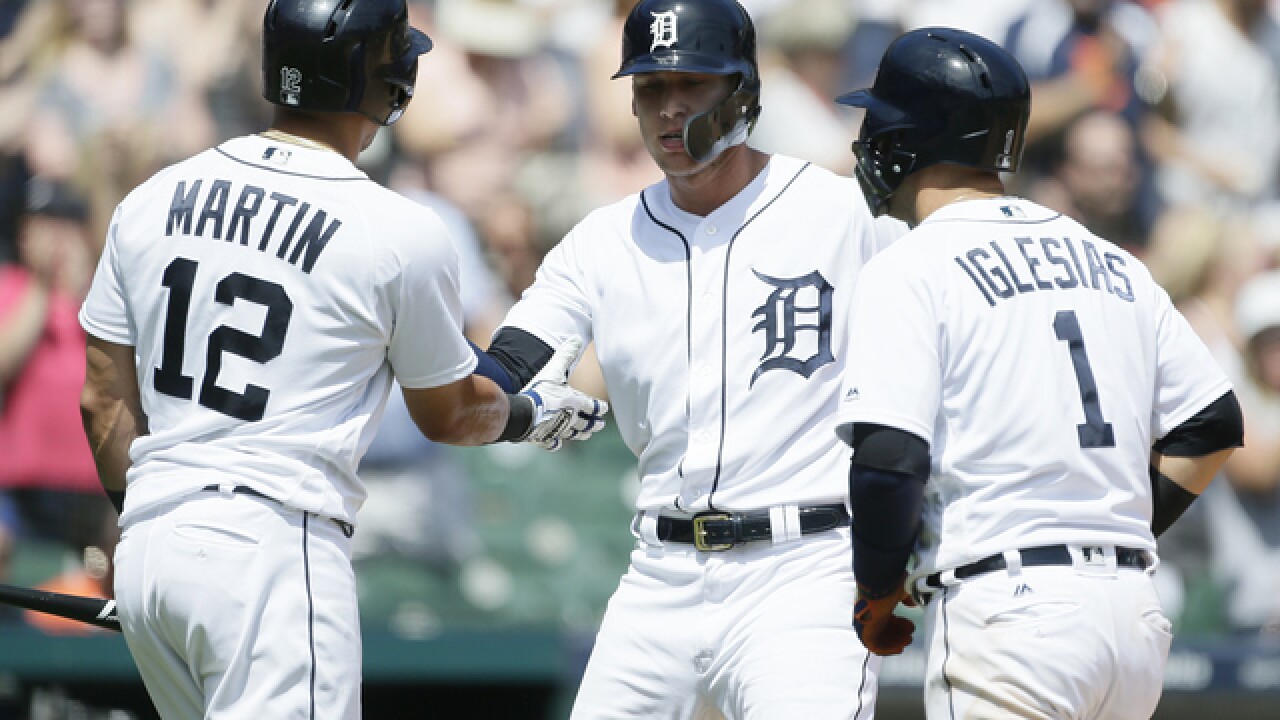 DETROIT (AP) -- When Detroit outfielder JaCoby Jones came to the plate in the seventh inning of a tie game Thursday afternoon, he was well aware he was struggling at the plate after striking out in his first two at-bats against the Twins.

He chose to focus on something else -- the walk-off home run he hit against the Kansas City Royals nearly two months ago -- and came through again.

Jones hit Lance Lynn's 3-1 fastball over the wall for the final two runs in Detroit's 3-1 win.

"I knew I had some success in big late-game situations earlier this year, so I tried to take something from that," said Jones, who was hitting .135 in his last 10 games. "I was just looking for a fastball I could drive.

"I've really been pressing, so I tried to be more relaxed -- the way I was earlier in the year when I hit that homer against the Royals," he said. "That's the type of thing that can get you right out of a slump."

Detroit won the last two games of the series to improve to 23-17 at Comerica Park. The Tigers, who play their next eight games on the road, are 10-20 away from home.

"This is our place, and we have done a great job of playing here," Tigers manager Ron Gardenhire said. "Now we've got to take this momentum onto the road."

Michael Fulmer (3-5) improved to 5-0 in five career starts against the Twins. He pitched seven innings, allowing one run on five hits and a walk with four strikeouts in ending a three-start winless streak.

"It's about time," said Fulmer, who won for the first time this year at home. "Everything felt great out there. Even when they got a run in the first, it was off good pitches that were where I wanted them."

Joe Jimenez pitched the eighth and Shane Greene threw the ninth for his 17th save.

Lynn (4-5) took a shutout into the seventh but ended up allowing three runs on five hits and a walk. He struck out nine in 6 2/3 innings.

"I wanted to pitch the seventh," Lynn said. "When all is said and done, it is a loss. I need to be better next time."

The Twins took a first-inning lead for the second day in a row. With one out, Eddie Rosario doubled and scored on Eduardo Escobar's base hit.

After that, the game belonged to Fulmer and Lynn. After six innings, the Twins still led 1-0 with four hits to Detroit's three.

John Hicks, though, led off the bottom of the seventh with his first career triple, a line drive to the right-centerfield gap.

"That's a good place to get a triple, and when I got to second base, I looked out there and they still hadn't picked up the ball," Hicks said. "I figured I should be able to make it to third at that point."

Niko Goodrum followed with a sacrifice fly to tie the game. With two out, Lynn hit Jose Iglesias, and Jones hit Lynn's 114th and final pitch over the wall.

"There were a lot of big smiles after that home run," Gardenhire said. "It was good to see JaCoby get one."

The homer was the first Lynn had allowed in his last six starts.

Detroit's three-run seventh came one day after the Tigers scored four in the eighth inning of a 5-2 win.

"It is fun to watch these guys play right now in the late innings," Fulmer said. "As a starting pitcher, I'd appreciate a few more first-inning runs, but this is great."

SANO DEMOTED
After the game, Twins manager Paul Molitor announced Miguel Sano had been optioned to Fort Myers of the Class-A Florida State League. Sano, an All Star in 2017, is hitting .203, including .148 in his last seven games. He last played in the FSL in 2013.
"We're going to get him down there and give him an opportunity to get things back on track," Molitor said. "We don't feel like we're getting what we need from him, and he's going to have to get down there and get to work."

CASTELLANOS STRUGGLING
With Miguel Cabrera out for the season, Nicholas Castellanos is expected to become Detroit's key hitter. Castellanos is hitting .133 in his last 10 games and is hitless in his last 18 at-bats, but Gardenhire doesn't plan to interfere.
"I try not to have many deep conversations with that young man because most of what he says goes over my head," Gardenhire joked. "Every time we get talking, I leave with my head spinning."

TRAINER'S ROOM
Twins: 1B Joe Mauer, who has been out since May 19 with a neck strain and concussion symptoms, is expected to return to the lineup on Friday. . Along with the Sano move, the Twins optioned OF Jake Cave to Triple-A Rochester.
Tigers: Cabrera was scheduled to have his ruptured bicep tendon repaired Thursday. The team expects him to be ready for spring training. ... C James McCann returned to the lineup after missing three games with the flu.