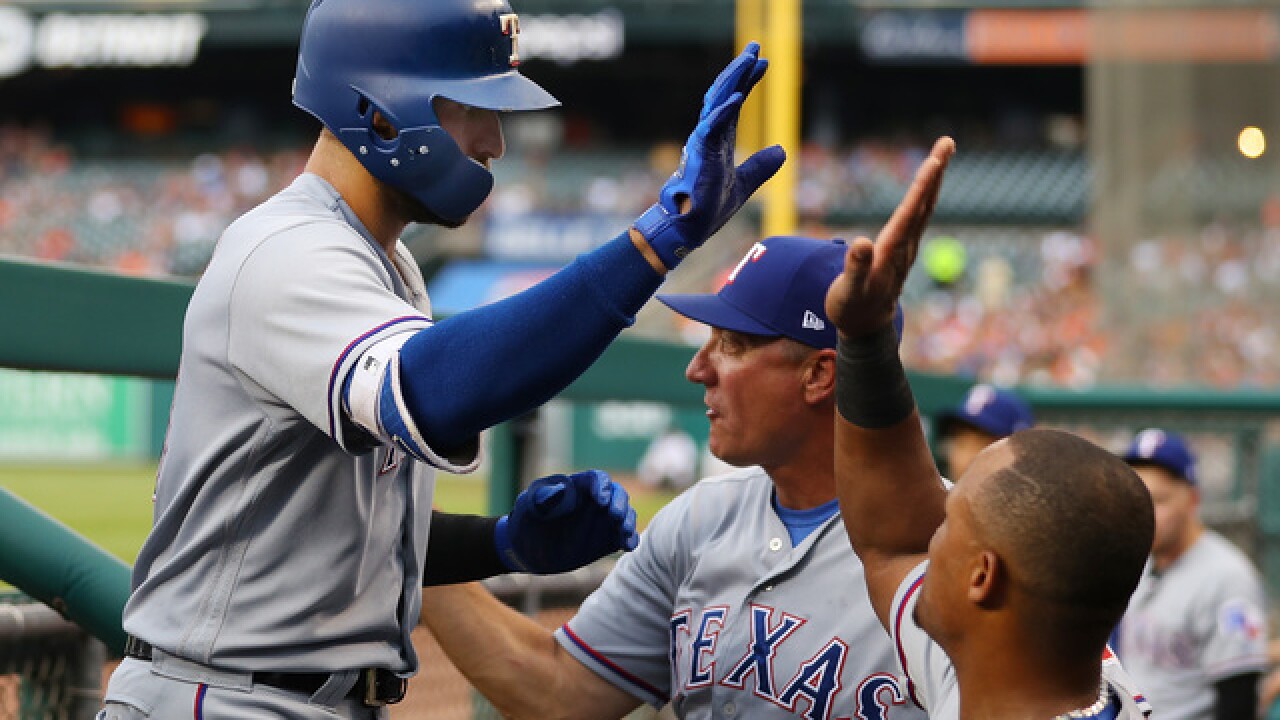 Yovani Gallardo (3-0) got the win, giving up four runs and eight hits in 5 1/3 innings. He walked one and struck out two while winning his third straight start.

Keone Kela allowed a run in the ninth before finishing off his 21st save as Texas snapped a three-game losing streak.

Matthew Boyd allowed a season-high seven runs and seven hits in four innings. He is 0-3 with a 10.59 ERA in his last four starts.

Detroit lost is third straight and dropped to 2-14 since June 17.

The Rangers took a 2-0 lead in the second inning when Gallo became one of the few players to clear Comerica Park's right-field stands with a home run.

Nomar Mazara made it 3-0 with an RBI grounder in the third, and Tigers third baseman Ronny Rodriguez misplayed Adrian Beltre's grounder to allow a fourth run to score.

Isiah Kiner-Falefa's fourth-inning RBI single off the glove of Tigers second baseman Niko Goodrum extended the Rangers' lead to 5-0 on the final pitch before a 29-minute rain delay. On Boyd's fifth pitch after play resumed, Guzman hit a two-run homer to put Texas ahead by seven.

The Tigers made it 7-3 in the bottom of the fourth on RBI singles by John Hicks, Jim Adduci and Rodriguez, but Gallardo got Jose Iglesias to hit into an inning-ending double play.

Goodrum homered in the sixth to make it 7-4.

Rodriguez started the ninth with an infield single and Iglesias reached on an error by third baseman Jurickson Profar. Victor Reyes followed with an RBI single to make it 7-5, but pinch-hitter Jeimer Candelario bounced into a force at second.

Kela struck out Nicholas Castellanos and retired Goodrum to end the game.

The game started 15 minutes late due to a brief rain shower.

TRAINER'S ROOM
Rangers: RHP Chris Martin (groin) was placed on the 10-day disabled list and RHP Ricardo Rodriguez was recalled from Triple-A Round Rock. . LHP Martin Perez (elbow) was scheduled to make his third rehab start for Round Rock on Thursday. Perez has not pitched for the Rangers this season after elbow surgery.
Tigers: Manager Ron Gardenhire, who left Wednesday's game in Chicago with heat exhaustion, stayed in the clubhouse Thursday while bench coach Steve Liddle managed. . RHP Drew VerHagen (broken nose) is expected to make one more rehab appearance for Triple-A Toledo before rejoining the Tigers.

UP NEXT
Bartolo Colon (5-5, 4.76) will try to break a tie with Dennis Martinez for most wins by a pitcher born in Latin America when he starts against the Tigers on Friday. Colon is the last active major-league player to have played at Tiger Stadium, which closed in 1999. Jordan Zimmermann (3-0, 3.91) is scheduled to start for Detroit.