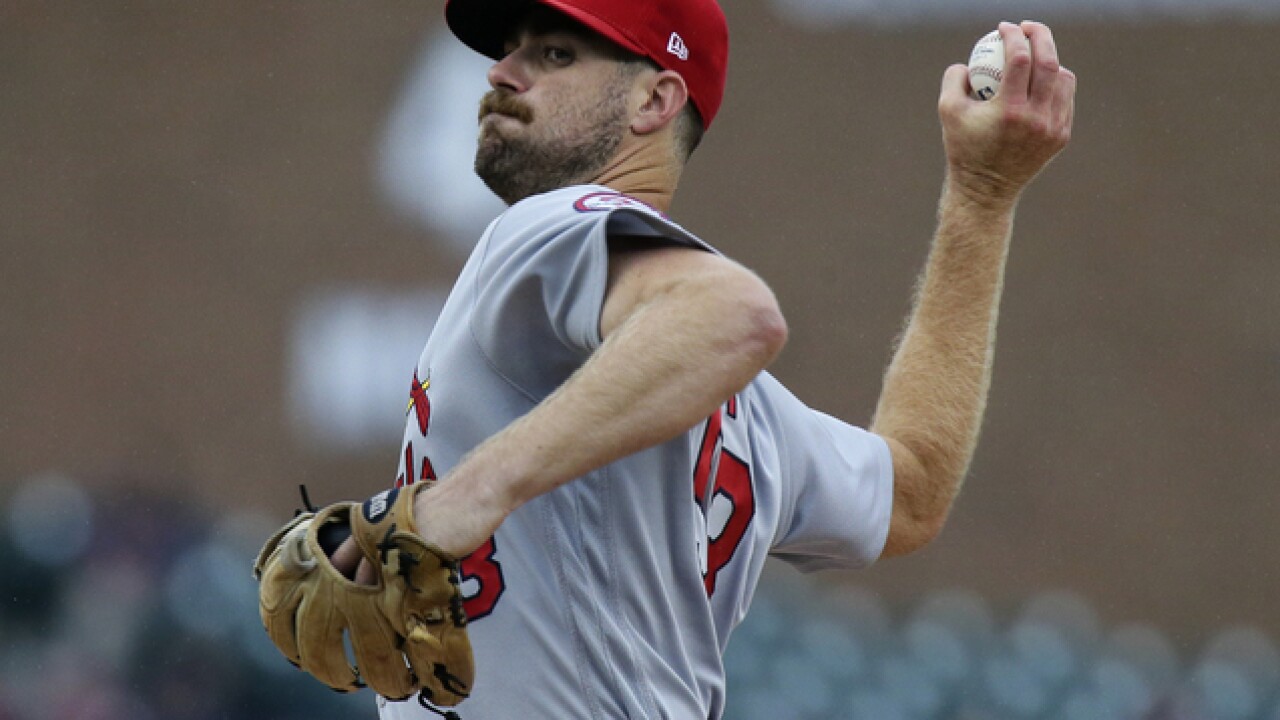 DETROIT (AP) -- The St. Louis Cardinals needed something to get them going on Sunday against the Detroit Tigers.

Out of nowhere -- again -- a squirrel appeared.

In an episode sure to revive St. Louis fans' memories of the 2011 Rally Squirrel, this game at Comerica Park was scoreless going into the seventh inning. That's when a squirrel took up residence between second and third base.

There was a delay and, with some prompting from the Tigers infield, the critter moved into foul territory and eventually made its escape in right field.

The Cardinals wound up scoring five times in the inning and avoided a series sweep with a 5-2 victory.

"I don't think you can discount that factor," manager Mike Shildt said. "The squirrel shows up and we score five runs. We only had six in the whole series before that."

During the 2011 NL Division Series, a squirrel cut across the diamond at Busch Stadium, running right past home plate during a game against Philadelphia. The Cards went on to win the playoff series and later the championship -- their World Series rings even depicted a squirrel.

"I don't necessarily believe in superstitions like that," said Cardinals shortstop Paul DeJong, who had a hit in the seventh. But he added: "Maybe you could call it the Rally Squirrel."

The Cardinals lost the first two games of the series in walk-off fashion and didn't have a baserunner until the sixth against Michael Fulmer.

St. Louis, which has a one-game lead for the second NL wild card spot, won for the third time in eight games.

"You never want to get swept by anybody," said Kolten Wong, who drove in the Cardinals' first run. "We knew they could be dangerous, because they have nothing to lose, and they gave us a battle. Luckily, we were able to get one."

"I knew I really needed to bear down, because we needed this game," Gant said. "I had to go out there and give my best effort."

Carlos Martinez pitched the ninth for his second save. After the game, Shildt said Martinez will replace Bud Norris as the team's closer.

Fulmer (3-11) was perfect through five innings but only got four more outs. He allowed five runs on five hits and three walks in 6 1/3 innings, striking out five.

"He was cruising, and then everything fell apart behind him," Tigers manager Ron Gardenhire said. "We didn't make a couple plays, we dropped a ball and they found a bunch of holes. I don't think they hit a ball hard off him."

Fulmer fell to 0-6 in his last nine starts, with the Tigers losing all nine.

"My job is to help this team win games, and I'm obviously not doing that," he said. "But I can feel the progress every time. This is the best I've felt in two years."

In the seventh, Marcell Ozuna and DeJong both hit infield singles with one out, and Wong followed with an RBI single to left. Yairo Munoz followed with a flyball down the right-field line that Niko Goodrum dropped, allowing the second run to score.

Greg Garcia was intentionally walked, loading the bases, and Carson Kelly hit the third infield single of the inning to make it 3-0. Victor Alcantara replaced Fulmer and allowed a sacrifice fly to Matt Carpenter before Jose Martinez's RBI single gave the Cardinals a five-run lead.

"Fulmer was really tough, but we found some little holes," Kelly said. "You never know when that squirrel will show up, but we needed it there."

The Tigers got their two runs in the bottom of the seventh, thanks to doubles from Nicholas Castellanos, James McCann and Ronny Rodriguez.

Carpenter and Shildt were both ejected after Carpenter was called out on strikes to end the ninth.

ROSTER MOVES
The Tigers brought up three players from Triple-A Toledo, one day after the Mud Hens were eliminated from the International League playoffs. Prospect Christin Stewart is expected to play regularly in left field, while C Jarrod Saltalamacchia will serve as the third catcher and RHP Zac Reininger will add a bullpen arm. Stewart made his major-league debut, pinch-hitting for Ronny Rodriguez with two out in the ninth. He popped out to third to end the game.

UP NEXT
Cardinals: Return home for a three-game series against the Pittsburgh Pirates. Adam Wainwright (1-3, 4.00 ERA) starts Monday for the Cardinals against Pittsburgh's Trevor Williams (12-9, 3.15).
Tigers: Justin Verlander (14-9, 2.73) returns to Comerica Park to face the Tigers on Monday in the first of a three-game series with the Houston Astros. Francisco Liriano (4-9, 4.90) starts for Detroit.