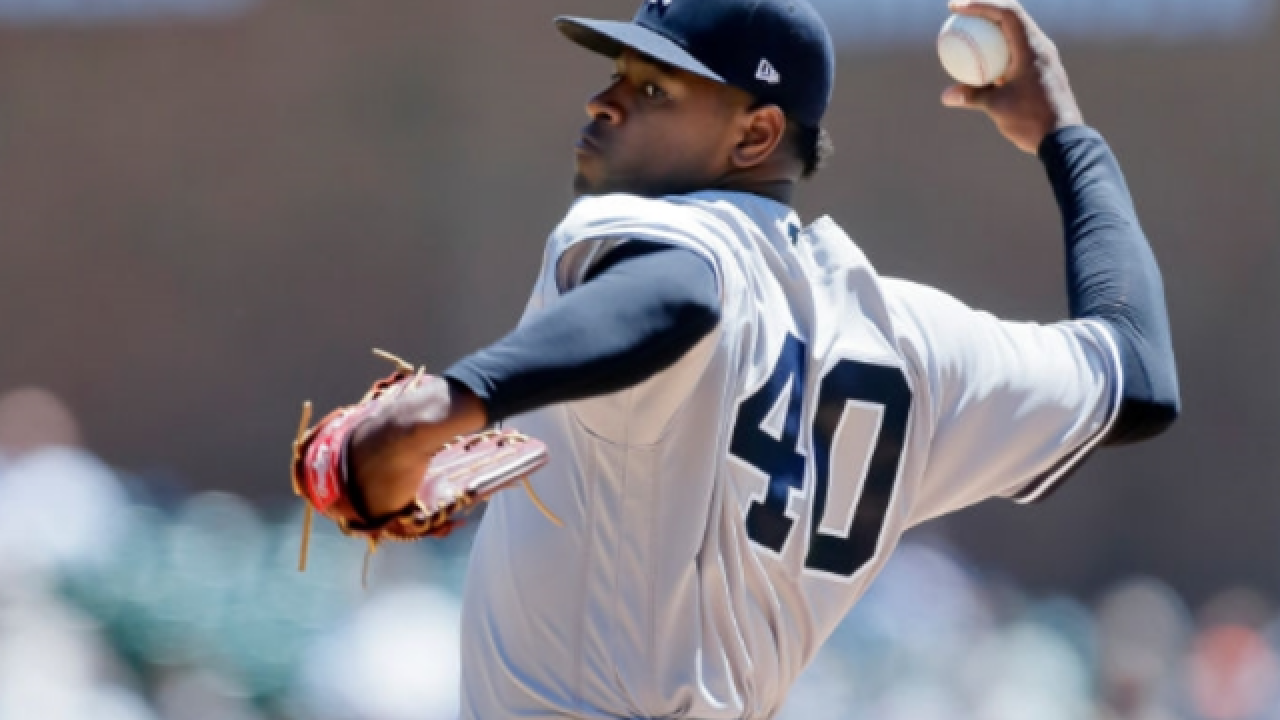 "We sent our ace out there for the first game and counted on him giving us a big performance," the New York Yankees manager said.

Luis Severino did just that, striking out 10 over eight innings to win his seventh straight decision in a 7-4 victory that extended New York's winning streak to five games.

"He threw 85 strikes in 112 pitches, which puts his percentage in the high 70s," Boone said. "That's how he got through eight innings, which is huge for our bullpen."

Gleyber Torres and Greg Bird also homered for the AL East-leading Yankees, who improved to a big league-best 38-17. New York is 21 games over .500 for just the second time since ending the 2012 season at 95-67; the Yankees were 91-70 last year before losing their regular-season finale.

"I've been able to execute all of my pitches almost every time out there this season," Severino said. "Today, it took me a couple innings to get on top of my slider, but everything was good after that."

"He's able to throw his changeup at two different speeds, so even when he doesn't have a great slider, he still has different offspeed looks for the hitters," Rothschild said. "He's throwing some of them at 79 or 80 and others at 88 or 89, which makes it tough on hitters."

Jonathan Holder allowed two unearned runs in the ninth, and Aroldis Chapman struck out Victor Martinez with a runner on second for his 14th save in 15 chances.

"I would have rather not used Chapman in that one, but he told me he's ready for the second game," Boone said.

New York is 15-1 against the AL Central since mid-September.

"I didn't get deep into the game, and I didn't give us a chance to win," VerHagen said after his first major-league start since August. "There's not much to like about that game."

Torres became the first Yankees player under 22 to hit 10 home runs in a season since Mickey Mantle from 1951-53.

Miguel Cabrera hit an RBI double in the first, but Torres tied the game in the third when he became the fifth New York player to reach double digits in home runs this season; Jeimer Candelario leads the Tigers with nine.

Bird led off the fourth with his second homer, Miguel Andujar and Clint Frazier had RBI singles and Romine hit his fourth homer for a 7-1 lead.

"The bottom of our order has been great, and Ro has been a big part of that," Boone said. "He's putting baseballs into places where our big guys hit them."

Sandy Baez, a 24-year-old right-hander making his major league debut for the Tigers as their 26th man, pitched 4 1/3 hitless innings of relief.

"We are proud of that young man," Tigers manager Ron Gardenhire said. "Eating up all those innings was huge in the first game of a doubleheader."

"I'm going to keep that ball wherever I go," Baez said. "I'll have it when I'm driving and when I'm at home."

SCHEDULING
Boone hopes there can be a schedule adjustment on July 8-9. New York is scheduled to play in Toronto at 8:05 p.m. on July 8, and last Thursday's rainout at Baltimore was rescheduled as part of a day-night doubleheader starting at 4:05 p.m. on July 9. "Hopefully it is something that gets worked out," he said. "But I also know it's way out of my hands and way out of my control."

FLIGHT DELAYS
The Yankees were delayed briefly in Baltimore after a radar problem on their charter and arrived in Detroit at 8:30 p.m. Sunday. On May 17, the Yankees were forced to spend a night in Dulles International Airport outside Washington, D.C., after the plane had mechanical problems in bad weather. New York had another lengthy delay at Dallas/Fort Worth International Airport on May 24.

TRAINER'S ROOM
Yankees: Frazier was recalled from Triple-A Scranton/Wilkes-Barre to serve as New York's 26th player in the doubleheader. He started the first game in left field. . The Yankees activated RHP Adam Warren from the 10-day DL between games and optioned RHP Tommy Kahnle to Triple-A Scranton/Wilkes-Barre.
Tigers: C John McCann sat out the first game after leaving Sunday's game with an intercostal strain. McCann warmed up pitchers between innings and was hoping to play in the nightcap.