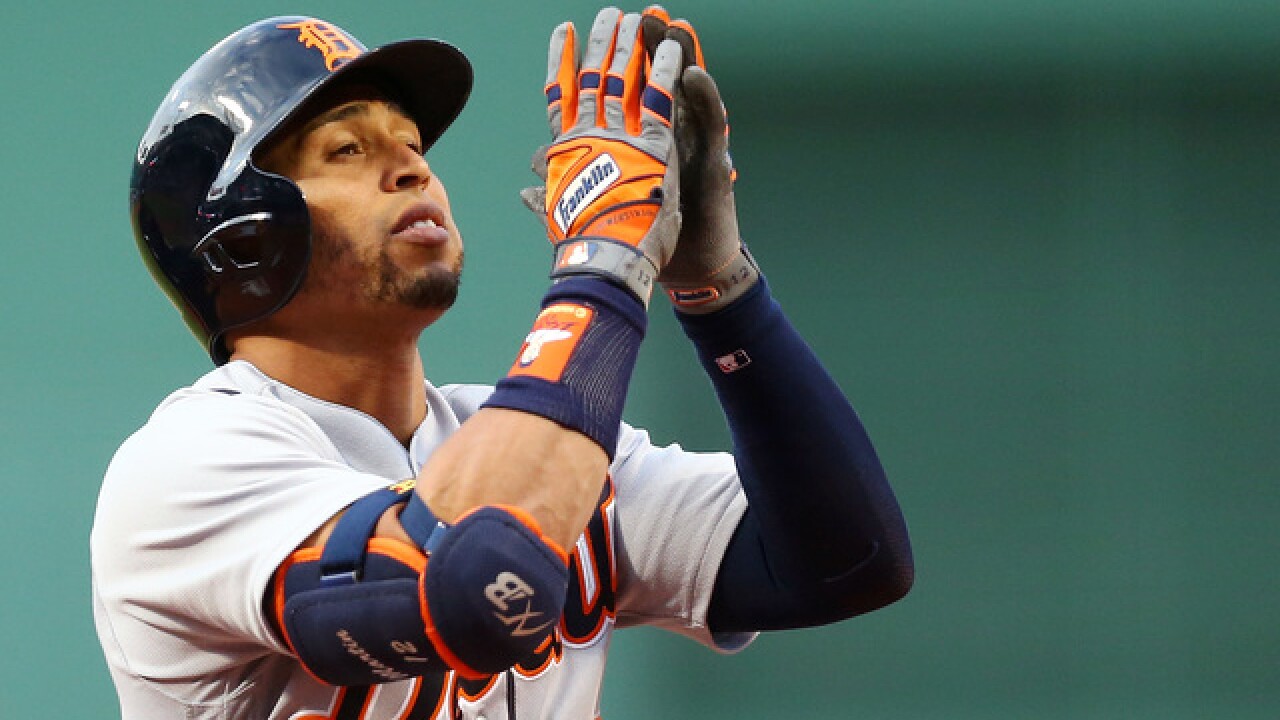 BOSTON -- Leonys Martin had a two-run homer to cap a five-run first inning and the Detroit Tigers beat the Boston Red Sox 7-2 on Thursday night.

Detroit's victory ended a four-game win streak for Boston, which had outscored Detroit 13-1 in the first two games of the series.

Left-hander Matthew Boyd (4-4) was solid in his third career start against Boston, allowing just four hits and two runs while striking out six over 6 1/3 innings. He gave up a solo home run to Andrew Benintendi and had three wild pitches, but they were just blips during a quiet offensive night for Boston.

Detroit's early onslaught spoiled the major-league debut of 24-year-old left-hander Jalen Beeks (0-1), who had a night to forget after been called up from Triple-A Pawtucket on Tuesday.

Trailing late, Boston loaded the bases with one out in the eighth on reliever Joe Jimenez, but he struck out Sam Travis and Rafael Devers to end the threat.

Beeks struck out the first batter of the night but ended his first big league inning by giving up five runs on four hits, including the two-run shot by Martin to put Detroit in front. That is the most earned runs given up by a Red Sox starter in his first career inning pitched, according to Elias Sports Bureau.

For the night, Beeks gave up six runs on seven hits with four strikeouts before being pulled after four innings.

Red Sox manager Alex Cora was left with a hole in his rotation after Drew Pomeranz went on the disabled list Tuesday with left biceps tendinitis. Wanting to give his regular starters a rest Cora decided to go with Beeks, who had impressed during spring training.

Beeks was informed of the call-up during the ninth inning of Pawtucket's game on Tuesday night.

After a whirlwind 24 hours that included quickly making arrangements for more than a dozen family members to be in attendance, his debut was short on highlights.

Nicholas Castellanos got Detroit going in the first when he doubled off the Green Monster. Beeks walked Miguel Cabrera but Castellanos was able to tag and advance to third when Victor Martinez popped out to right.

Jeimer Candelario then ripped an RBI double down the left field line. John Hicks kept the rally going with a two-run single. Martin then made it 5-0 with his blast over the Green Monster. The inning finally came to an end when Beeks got Jose Iglesias to pop out on the infield.

Red Sox: Jackie Bradley Jr. had a scheduled day off on Thursday. Manager Alex Cora said Bradley did not have any lingering issues after twice being hit by a pitch during Wednesday's win over the Tigers. He's been hit a team-high six times this season. ... RF Mookie Betts (abdominal strain) participated in batting practice before Thursday's game and Cora said a decision was still pending on whether he'd be given a short rehab assignment or simply be activated from the disabled list.

Benintendi has now homered in four of his last five games. He is the first Red Sox player other than Mookie Betts to hit a leadoff home run since Brock Holt on July 13, 2014.

Both teams had a pair of highlight-worthy defensive plays.

Rafael Devers denied Castellanos an extra-base hit in the second inning when he dove to snare his hard-hit line drive down the third base line.

Then with the Red Sox threatening in the seventh with a runner on second, shortstop Jose Iglesias returned the favor by knocking down Benintendi's sharply hit ground ball and getting up to throw him out.

Red Sox: Left-hander Chris Sale (5-3, 3.00) gets the start for Boston when it begins its three-game series with the White Sox at Fenway on Friday. Sale has won four straight decisions and ranks second in the American League with 110 strikeouts.