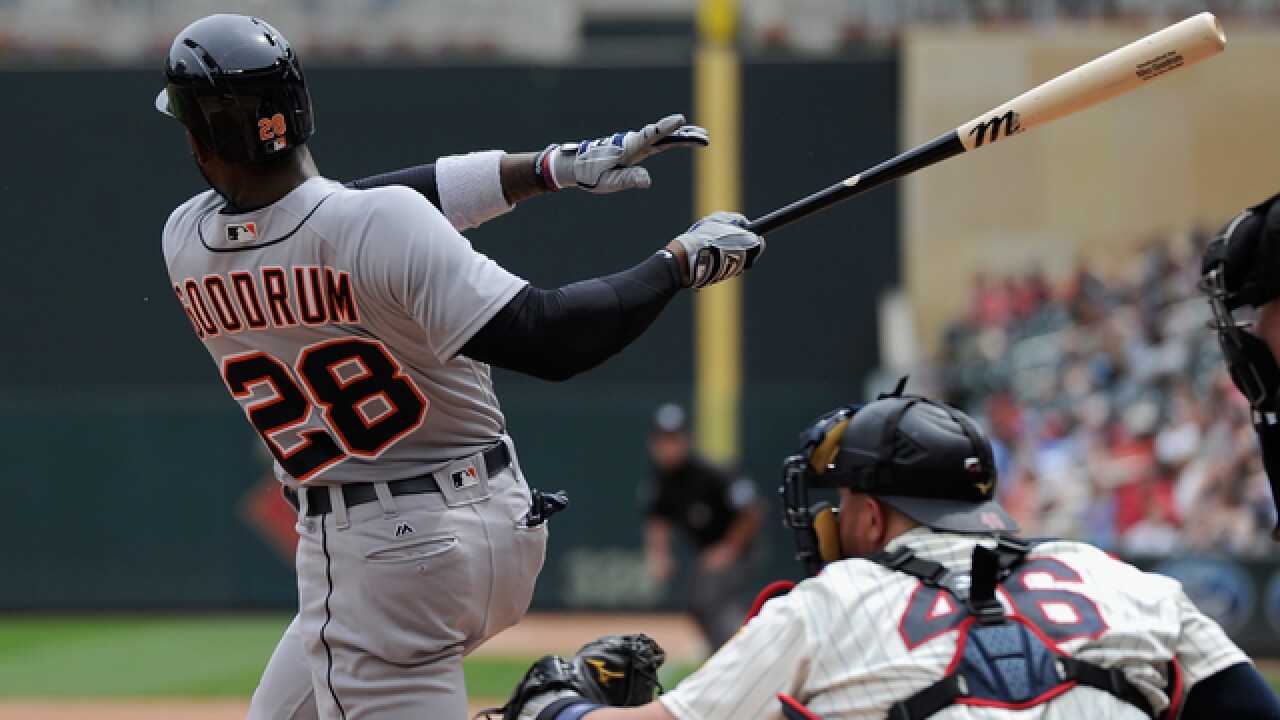 Copyright Getty Images
Hannah Foslien
<p>MINNEAPOLIS, MN - MAY 23: Niko Goodrum #28 of the Detroit Tigers hits a two-run home run against the Minnesota Twins during the fourth inning of the game on May 23, 2018 at Target Field in Minneapolis, Minnesota. The Tigers defeated the Twins 4-1. (Photo by Hannah Foslien/Getty Images)</p>

MINNEAPOLIS (AP) -- Michael Fulmer won for the first time in four starts, Niko Goodrum ended an 0-for-14 skid with a home run and the Detroit Tigers stopped a five-game losing streak with a 4-1 win over the Minnesota Twins on Wednesday.

Brain Dozier led off the bottom of the first with a drive to deep center that missed a home run by a few inches. The ball stuck in a seam between two pads near the top of the 8-foot wall in center, and Dozier was given a double.

Fulmer (2-3) allowed one run and four hits in 5 2/3 innings with five strikeouts, improving to 4-0 against Minnesota as he threw a season-high 112 pitches. He had lost his previous three starts, allowing 14 earned runs in 16 1/3 innings.

Shane Greene pitched a 1-2-3 ninth for his 11th save in 14 chances, completing a five-hitter.

Goodrum, Nicholas Castellanos and Victor Martinez had two hits each for the Twins.

Kyle Gibson (1-3) gave up three runs and six hits in six innings. He is 0-3 in nine starts since winning at Baltimore on March 31.

Martinez hit a sacrifice fly in the first, but Eddie Rosario had an RBI single in the bottom half, the first of his three hits.

Goodrum homered for a 3-1 lead in the fourth following a single by Martinez, and JaCoby Jones added an RBI single in the ninth off Ryan Pressly.

TRAINER'S ROOM
Tigers: LHP Matthew Boyd, who left Tuesday's game with a left oblique spasm, was feeling good and expected to get out and move around pregame, according to manager Ron Gardenhire.
Twins: Manager Paul Molitor said 3B Miguel Sano (left hamstring strain) was going to play first base for Triple-A Rochester before potentially returning to the Twins. ... RHP Michael Pineda is to throw 15 pitches off a mound for the first time Wednesday since having Tommy John surgery last July 18.