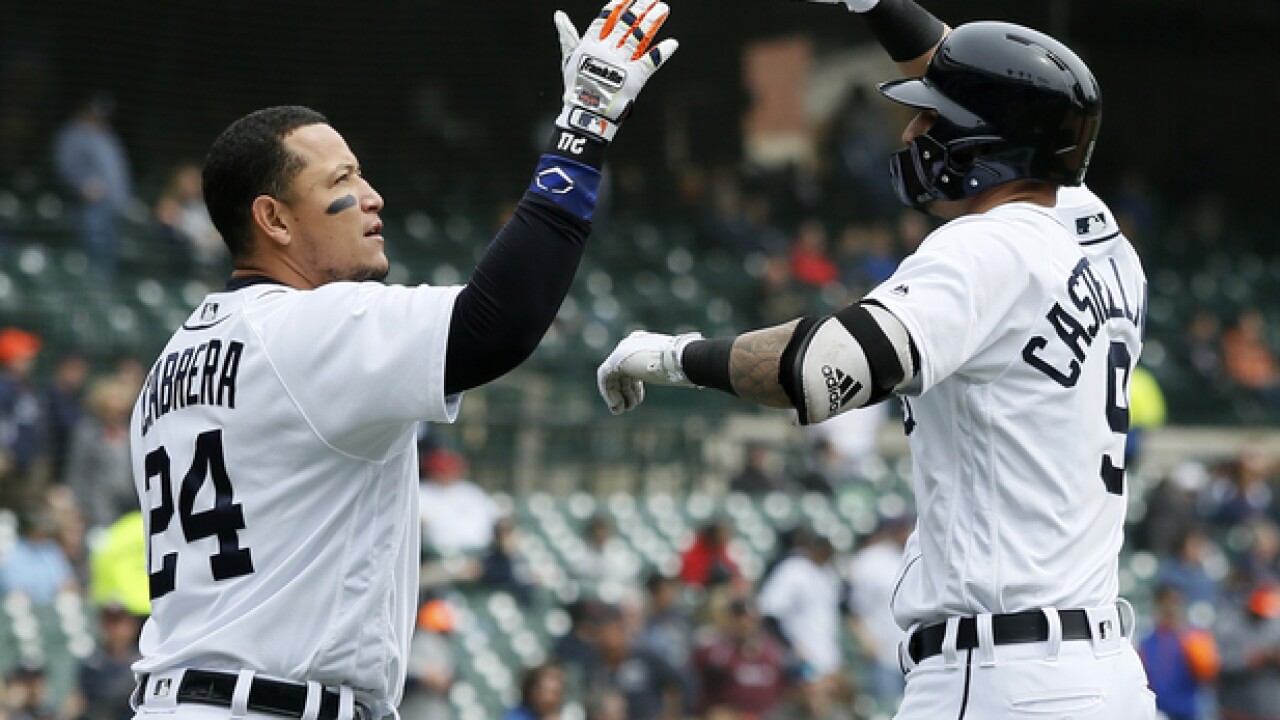 DETROIT (AP) -- The Detroit Tigers came into this season well aware of how little was expected of them.

For now, they're hanging around the .500 mark -- and maybe, just maybe, starting to win over a few fans.

Nicholas Castellanos homered and drove in three runs, and the Tigers routed the Kansas City Royals 12-4 on Saturday. Detroit is a game under .500 after winning five of six. The Tigers broke a 3-all tie with three runs in the fifth on a day when both starting pitchers were in almost constant trouble.

"Everybody had a sheet on the chair, first day of spring training. One of the media guys, people printed that 2018 Tigers will stink," said Castellanos, whose team lost 98 games last year. "All we're doing is going out there trying to prove people wrong."

Warwick Saupold pitched 2 1/3 perfect innings for his first career save.

Abraham Almonte had three hits for Kansas City, which has lost 10 of 11. The Royals snapped a nine-game losing streak Friday night when they rallied in the ninth inning to salvage a split of a day-night doubleheader.

JaCoby Jones, whose home run won the first game of that doubleheader, went deep again for the Tigers on Saturday.

Castellanos finished a triple shy of the cycle. He opened the scoring with an RBI single in the first, and his two-run homer made it 3-1 in the third. The Tigers gave up two runs in the fourth, thanks in part to an error by catcher James McCann that loaded the bases with nobody out, but Detroit took the lead back for good in the fifth when Dixon Machado hit an RBI single with two outs to make it 4-3, chasing Duffy.

"He was really struggling to command his changeup, so he was grinding all day," Royals manager Ned Yost said. "When he loses that pitch, he's only got his fastball and slider, and that means he has to be perfect with the slider. When he makes a mistake, like he does with Castellanos, it really hurts him."

Reliever Tim Hill allowed a bunt single to Leonys Martin that loaded the bases in the fifth, then the left-hander walked Jeimer Candelario and Miguel Cabrera to force in two more runs.

Jones hit a solo shot in the sixth to give the Tigers a 7-4 lead, and Cabrera's two-run single made it 9-4 in the seventh.

TOUGH CHALLENGE
Duffy was starting on short rest after pitching in a doubleheader Tuesday at Toronto.
"That wasn't a problem at all. I felt better than I have on normal rest," Duffy said. "It took a lot of preparation to get to that point, but I volunteered for that, and it didn't bother me a bit."
Duffy's shaky outing, however, set the tone on a day when the Tigers had 16 hits and drew eight walks. Jose Iglesias had three hits for Detroit, raising his average to .206.
"It's a good win for us," Tigers manager Ron Gardenhire said. "A good bounceback from last night."

FALLING SHORT
The bunt single by Martin was the first hit allowed by Hill in eight major league appearances. He was one hitless appearance shy of tying the modern big league record, according to information from the Elias Sports Bureau, distributed by the Royals.
Garry Rogenburk (1963) and Jonathan Sanchez (2006) went their first eight outings without allowing a hit.

TRAINER'S ROOM
Royals: OF Alex Gordon (left hip tear) played in the first game of his rehab assignment Friday, going 0 for 4 with a run for Triple-A Omaha. Salvador Perez (left knee sprain) went 1 for 4 in that game as a DH, and he was expected to catch Saturday night for Omaha.