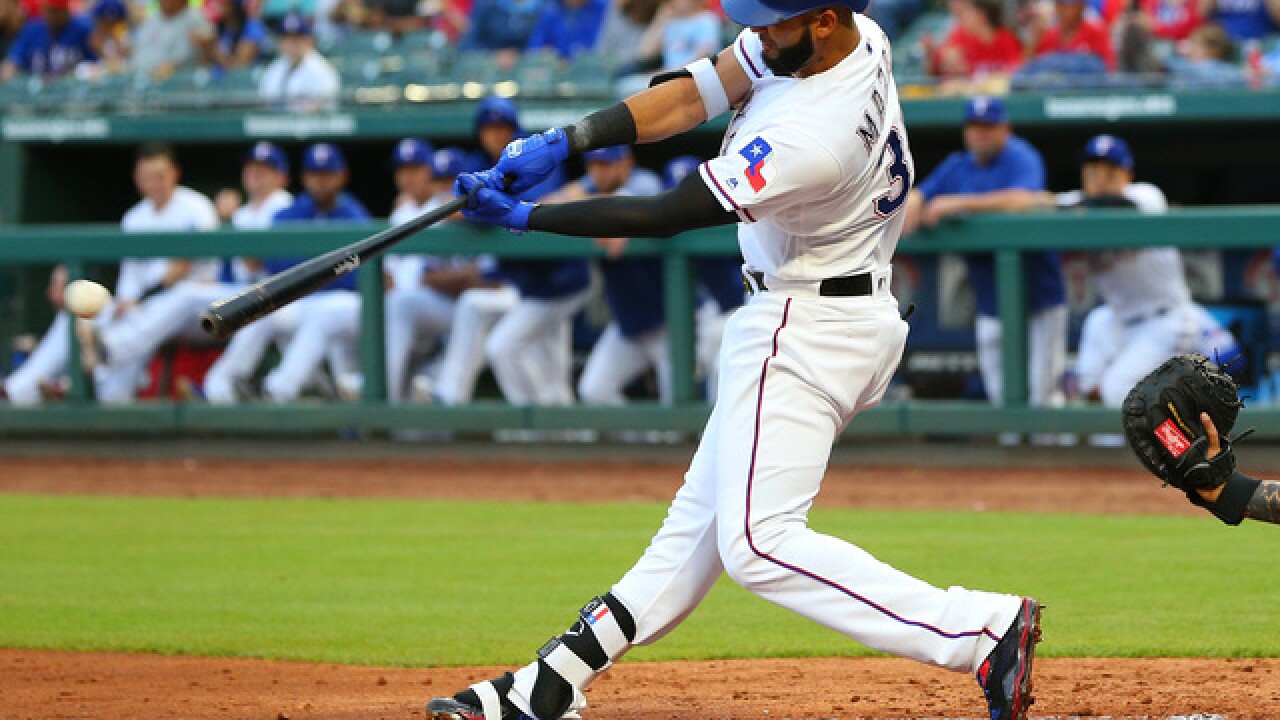 Copyright Getty Images
Rick Yeatts
<p>ARLINGTON, TX - MAY 04: Nomar Mazara #30 of the Texas Rangers hits a standup double in the second inning against the Boston Red Sox at Globe Life Park in Arlington on May 4, 2018 in Arlington, Texas. (Photo by Rick Yeatts/Getty Images)</p>

ARLINGTON, Texas (AP) -- Nomar Mazara was looking for something up in the zone in each of his last two at-bats. The young slugger got it, and went deep both times to give the Texas Rangers their first winning home series this season.

After hitting a tying, solo homer in the seventh inning, Mazara led off the 10th by pulling a 1-0 pitch into the right field seats to lift the Rangers over the Detroit Tigers 5-4 Wednesday.

"I've been feeling pretty good lately, but that's not what it's about ... you just go out there and try and find a way to win games," Mazara said after his first career game-ending homer.

Mazara has seven homers in May and 10 this year, already halfway to the 20 homers he had in each of his first two big league seasons. The 23-year-old right fielder's drive estimated at 447 feet in the seventh made it 4-all. The game-ender went out in a hurry -- with an exit velocity of 117 mph, according to MLB stats, to go 416 feet. He connected off Warwick Saupold (1-1), the sixth Detroit pitcher.

There was a brief conversation in the tunnel behind the dugout between manager Jeff Banister and Adrian Beltre after Mazara's game-tying homer.

"I talked about how Mazara is turning himself into a special player, and that's what he's doing," Banister said. "And he showed that, not only today, but just how he's play all year long."

The Rangers took two of three, but are still 7-16 overall at home. They had lost their first six home series, their most ever to start a season.

Beltre, the DH in his second game back from the DL, had an RBI single and a sacrifice fly for Texas. He has 3,079 career hits and his 1,654 RBIs broke a tie with Tony Perez for 22nd on the all-time list.

Pete Kozma homered in his first big league at-bat this season while Mikie Mahtook had a triple and a sacrifice fly in his return to the majors for the Tigers.

Kozma homered in the third, then reached on an error in the fifth before coming home on Mahtook's fly that tied the game against Bartolo Colon.

Colon threw 98 pitches in five innings, leaving in a tie game after allowing three runs (two earned) with four strikeouts and a walk. The right-hander only two weeks shy of his 45th birthday, stayed at 241 career wins, two shy of Hall of Famer Juan Marichal for the most by a pitcher born in the Dominican Republic.

"He's an animal. He's got all the life in the world in him, enjoys baseball. You can see it. He still can make pitches," Tigers manager Ron Gardenhire said. "It's fun seeing him out there competing. He's smiling."

LEADING OFF
Rangers CF Delino DeShields drew a career-high four walks, all leading off innings. He scored twice, but in the seventh was thrown out at third trying to advance two bases on Isiah Kiner-Falefa's sacrifice bunt. It was the most walks in a nine-inning game by a Rangers player since Milton Bradley Jr. had four at Oakland on July 25, 2008.
"You've got to stay calm, you've got to stay patient to walk four times," Banister said. "Great work by him."

TRAINER'S ROOM
Tigers: OF Leonys Martin had been dealing with soreness behind his left knee for a couple of weeks before an MRI revealed a hamstring strain, and becoming the third Tigers player to go on the DL this week. ... First base coach Ramon Santiago was hit in the upper body by McCann's foul liner in the second inning. Santiago was OK.
Rangers: C Robinson Chirinos was scratched from the lineup because of left wrist soreness. He has been dealing with the issue for about three weeks.

BONUS BASEBALL
Texas is 4-0 in extra-inning games this season. Detroit is 3-2.

HE SAID IT
"Look at what we've done with a depleted lineup. ... You go look at our losses and you could very easily flip-flop our win-loss record based on games that we've been in," said James McCann, who had a go-ahead RBI single in the sixth for the Tigers.