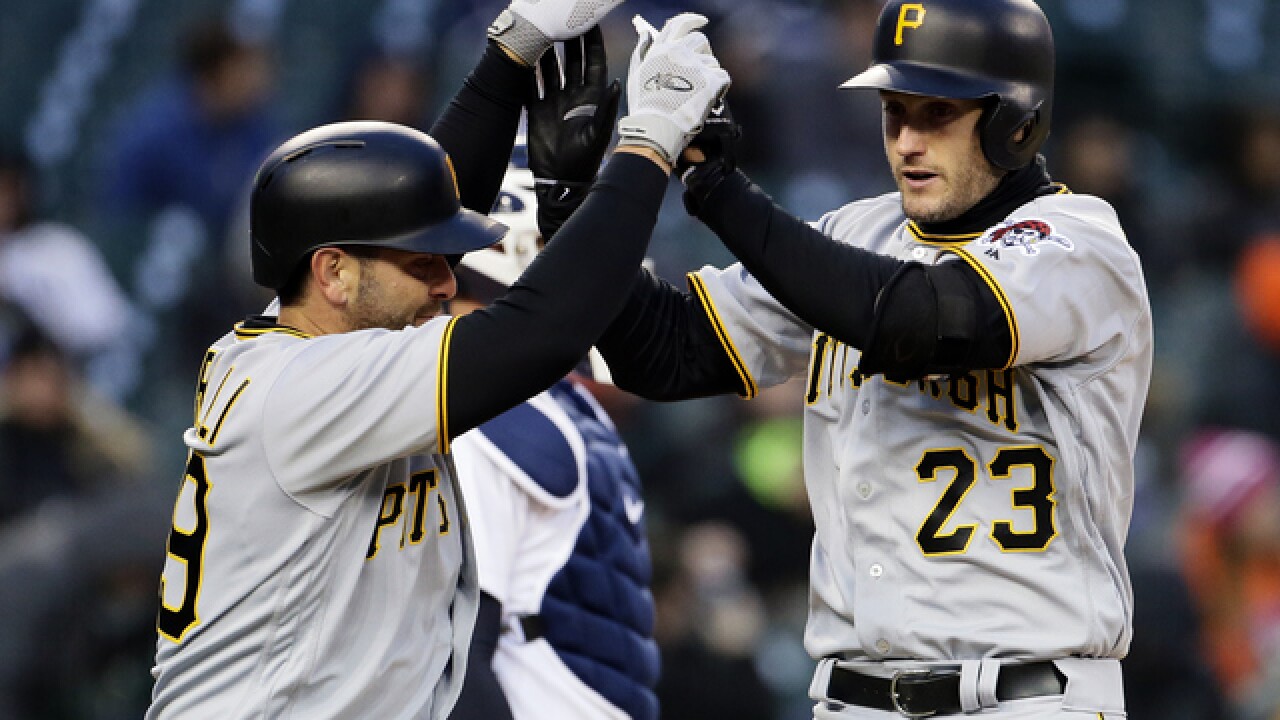 DETROIT (AP) -- Josh Harrison, Starling Marte and David Freese homered for Pittsburgh, and the Pirates completed a doubleheader sweep of the Detroit Tigers with an 8-6 victory Sunday night.

Pittsburgh won the opener 1-0 behind six no-hit innings from Trevor Williams, then took control of the second game with five runs in the fifth.

Pittsburgh swept the three-game, season-opening series against the rebuilding Tigers. The highlight of the day for Detroit was Miguel Cabrera's first home run of the season, a solo shot in the sixth inning of the second game.

Felipe Rivero saved both games for Pittsburgh, striking out the side in the ninth to end the opener and getting the final three outs of the nightcap after coming in with a man on second and an 8-5 lead. Rivero allowed four runs in the ninth inning in the first game of this series, a 13-inning victory by the Pirates on Friday.

Harrison hit a two-run homer in the third -- it looked initially like he'd have to settle for a double when the ball bounced back into play, but the call was changed to a home run after a review on his flyball to the left-field corner. Marte added a solo shot one out later to give the Pirates a 3-2 lead.

It was 3-all before Pittsburgh's big fifth inning. Buck Farmer (0-1) allowed a sacrifice fly by Jordy Mercer, then another run came home on a wild pitch. Francisco Cervelli added an RBI single, then Freese connected for a two-run shot to left.

In the opener, Williams (1-0) was pulled with a no-hitter in progress after six innings. He threw 84 pitches, his count boosted by five walks, and was replaced by Michael Feliz to start the seventh.

"I was playing Russian roulette all day with the walks, so I totally understood the move," Williams said. "It was 1-0 when I came out and it ended up 1-0, so it worked perfectly."

Gregory Polanco's RBI double gave the Pirates a 1-0 lead in the first, and that held up as the game's only run.

The doubleheader was scheduled after a rainout Saturday. Attendance was 14,858 for the opener and 18,438 for the nightcap.

TRAINER'S ROOM
Pirates: RHP Joe Musgrove threw 92 pitches in a Gulf Coast League game Saturday and is expected to join the Pirates' rotation later this week.
Tigers: LF Victor Reyes left the second game with a right forearm laceration after he went diving after a shallow fly and accidentally took SS Jose Iglesias' legs out from under him. Iglesias held on for the third out of the fifth inning but appeared frustrated, flinging the ball all the way over the fence in left. The game marked Reyes' major league debut. ... RHP Mike Fiers (back) is scheduled to throw a simulated game Monday at Detroit's extended spring training facility and could come off the disabled list later in the week.

RIVERO VERSUS CABRERA
Rivero went to a 2-0 count on Cabrera to start the ninth inning of the first game, but got three straight swinging strikes on fastballs.
"I was behind in the count, so he knew I was going to be throwing fastballs," Rivero said. "He just couldn't catch up with them."
Cabrera hit an RBI double off Rivero in the second game.